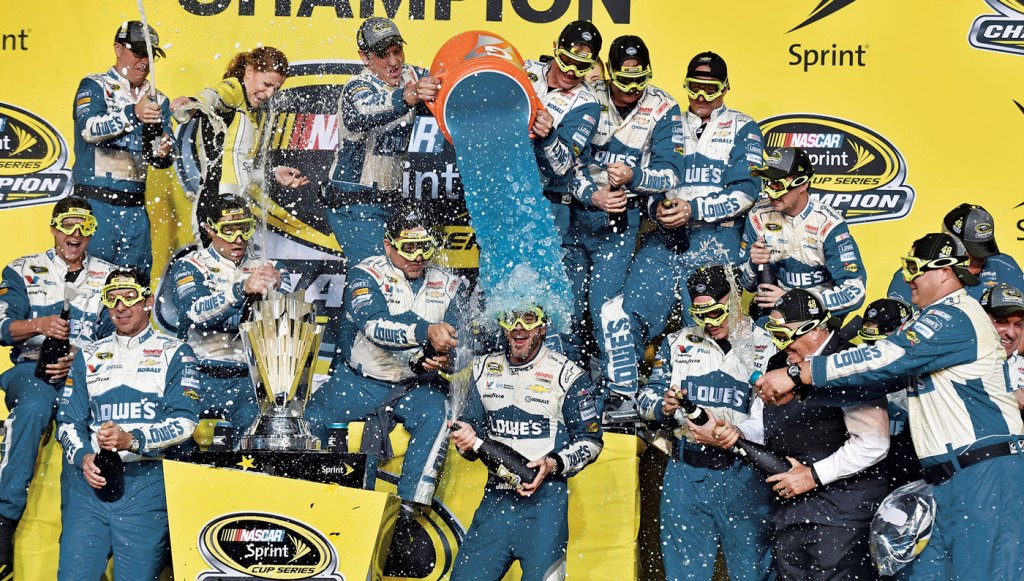 Jimmie Johnson’s need for speed is elemental. The NASCAR driver—who in November joined legends Richard Petty and Dale Earnhardt as the only seven-time champions in Sprint Cup Series history—began racing motorcycles competitively at the age of 5. By 7 he was the kid to beat in his 60cc class, soaring 65 feet in the air off 6-foot jumps. He spent his teen years in San Diego, outgunning rivals in off-road trucks. At age 23 he was the American Speed Association’s 1998 Rookie of the Year, and today, at 41, he is the titan of Hendrick Motorsports, with career earnings topping $100 million. Even as the stock-car circuit’s most accomplished driver, however, No. 48 manages to keep pace with his young family, philanthropic projects, and a few high-octane leisure pursuits.

What’s the thrill of being the fastest of the pack?

I’m without a doubt an adrenaline junkie. It doesn’t matter if I’m in the racecar or doing something else, it’s just a craving I have to ignite that fire. On skis, I’m in the trees. On a snowboard, I’m in the terrain parks. I grew up surfing and somehow always found the biggest waves. I swam in high school, and on weekends we’d climb something big just so we could jump off it into the water.

My grandparents owned a motorcycle shop, so I came up in an environment where it was natural to ride motocross and ATVs. I’ve seen pictures of me as a little tyke just sitting on the gas tank riding with my dad. Going fast was something fun to do. Ironically, though, speed is only one aspect of my driving success. I’m not known for being the fastest guy in NASCAR.

Oh, absolutely. My fastest speed was 217 mph at the Michigan International Speedway. You’re blazing along pretty good at that pace. But my whole thing has been about the mechanics and mental aspect of the race—how best to compete, sizing someone up, figuring out how to outrace them and outpass them. That’s been my sweet spot since I was young.

Take us inside the NASCAR experience. What’s it like for you behind the wheel?

It’s highly visceral, for sure. The car has 900 hp. We’re on a very small tire and contact patch to the ground relative to how much horsepower we have, so your thoughts are really about, How much throttle can you give the car? Is the car going to stick in the turns? Controlling this high-powered vehicle on these small tires is really a handful. On that ragged edge of traction, your mind is in a heightened state, and you become comfortable with the car slipping and sliding. But certainly nerves come into play. You’re on a balancing point between control and loss of control, and there’s always a high risk for heavy impact and injury. That said, I’ve been doing this so long I feel at home walking that tightrope.

People don’t realize how physical a sport NASCAR is. You’re an endurance athlete as well, competing regularly in triathlons. How do those pursuits complement each other?

Our shortest NASCAR race is probably 3 and a half hours. All the banking and cornering and deceleration is punishing on the body, so you do whatever you can to stay in great shape. I’ve also learned a lot about nutrition and hydration to fight those tough, hot days. We don’t have A/C in these vehicles, because we need to keep them fast and light, so it’s around 115 to 120 degrees inside, regardless of the outside temp. From a muscle standpoint, NASCAR drivers are imbalanced because we’re always making left-hand turns. Swimming, biking, and running strengthen the body evenly, side to side, and all those sports have really benefited me.

Cyclists can be as obsessive as car fiends when it comes to gear. Are you one of those guys?

I have a few custom Treks, including the Trek Émonda and Trek Speed Concept 9.9. But I’m not a nut. Because I came from motocross, it was an easy transition to mountain biking, but I didn’t start cycling until maybe 4 or 5 years ago. On Saturdays on race weekends, we’re done at 1 or 2 pm, and there’s a huge community from NASCAR that rides. That’s what’s really sucked me into it. We leave the racetrack and map out a route based on how much available sunlight we think we have to get back to the hotel. A lot of times, the hotel is only 5 or 10 miles away, but we’ll take a 70-mile loop to get there and just burn all the daylight that we have left.

What automobiles do you drive when you’re not racing?

I bought a ZR1 Corvette a few years ago. It’s just an awesome muscle car. I have a ’48 Woody Wagon, a ’49 Chevy Stepside truck. My favorite is probably the ’51 Merc. It’s black and it’s chopped and lowered with shaved door handles. It even has the fuzzy dice hanging from the rearview mirror. Of course, since the need for car seats came along, I spend most of my days now in a Chevy Tahoe.

Are there innovations from racing you think we’ll see in commercial vehicles in upcoming years?

Definitely. Greater efficiency, which can boil down to materials that help the car be lighter. Obviously, crumple zones and better dynamics to make vehicles safer in wrecks. Magnetic active ride suspension is coming along. Some of it is disguised: Side impact bags, seats molding to you—that all comes out of motorsports.

How does racing—and the danger that goes with it—impact your family? Do you think about your daughters when you’re driving?

I do beforehand, for sure. When you get in the moment, you need to forget about everything. NASCAR does an amazing job of making our form of motorsports the safest out there, period. So I put a lot of confidence in that. The cars are now designed with these soft walls, and we use the most advanced safety devices for the head and neck. Even my wife is OK as far as the safety level of the sport. You can’t think about the dangers while you’re driving. You have to make split-second decisions, and I’m very aware that if those thoughts creep in, it’s time to hang the helmet up.

You and your wife, Chandra, have raised nearly $10 million in the past decade at the Jimmie Johnson Foundation. What’s been your proudest achievement from those efforts?

What’s great is giving back to school systems by funding K–12 public education. It’s been so rewarding, and we’ve made a huge difference especially in the little hometowns where Chandra and I grew up in Oklahoma and California, and now North Carolina, where we live.

Where do you go to turn off the engine completely?

For me, St. Barts has always been a real special place. My wife and I got married there in a little church in Gustavia by the harbor, and I love the flavor of Europe so close to home. The Amalfi Coast is another getaway. I love Le Sirenuse in Positano, and there’s a restaurant named La Conca del Sogno that’s probably our favorite in the world.