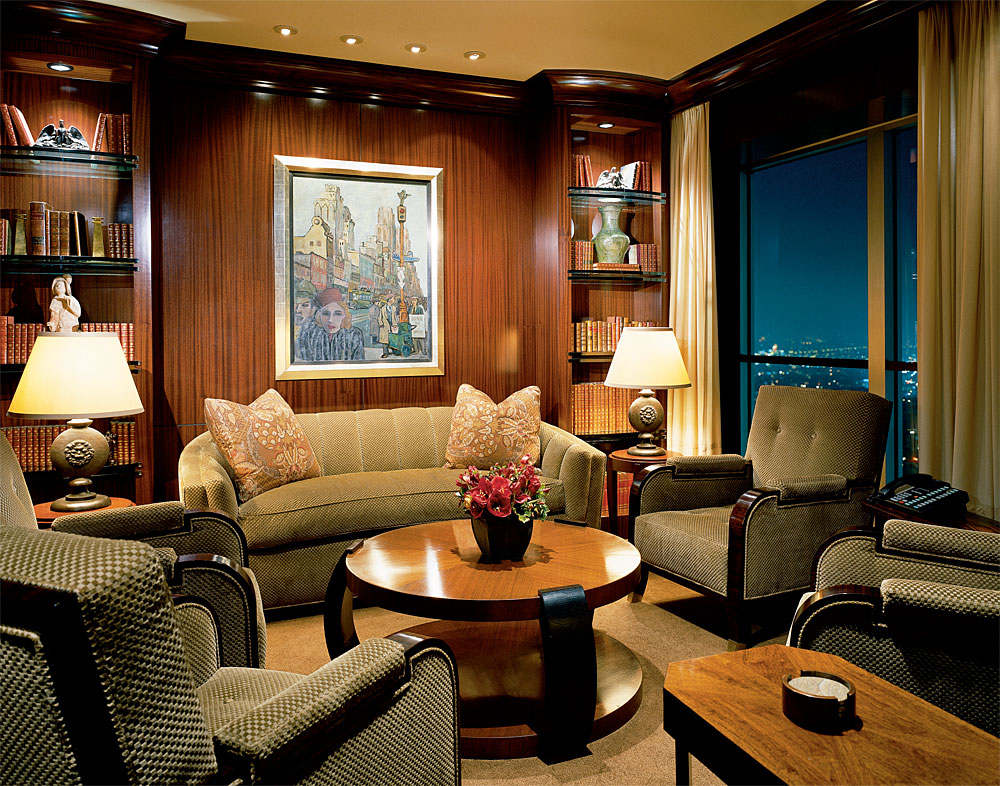 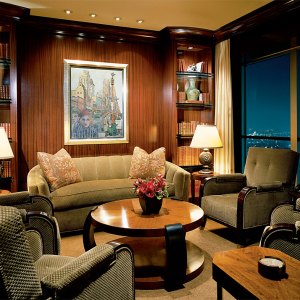 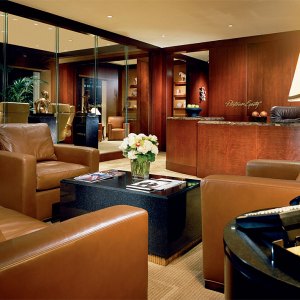 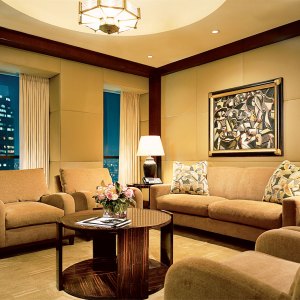 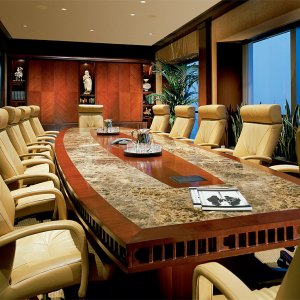 Platinum equity’s exterior, what little there is of it, could not be more generic: an unassuming door in an office building in Century City, a commercial cluster of high-rises in West Los Angeles.

But employees and visitors are buzzed into a different world, one that both embraces and challenges assumptions about what workplaces should look like. The harsh fluorescent light of the hallway immediately gives way to an entryway that is bathed in pools of soft light and cloaked in sound-muffling mohair.

Still, there are signs that you are entering a place where business rules the day: The grandeur of L.A.’s commercial past emanates from the walls in brass plaques depicting scenes of harvests and commerce resurrected from office elevators of the 1930s.

“My concept was that this was a progression leading to the reception room,’’ says interior designer Frank Pennino, who fashioned Platinum Equity’s physical expansion and transformation in stages over a period of three years.

The entryway leads into the central reception area; beyond it is the conference room, which is guarded by three Sy Rosenwasser abstract bronzes that depict conflict and resolution. They are perfect metaphors for Pennino’s approach to Platinum, representing as it does a union of opposites: The space is commercial but it is also a showcase for the company’s staggering growth, and it borrows heavily from the comforts of home. While rich mahogany and cognac colors suggest the solidity and tradition of the financial world’s East Coast strongholds, earth-toned upholstery and walls of glass project the lightness of the forward-looking West Coast.

The office’s dual personality reflects the mission posed by Platinum’s chairman and CEO, Tom Gores, who recruited Pennino for the job because he was delighted with the work the designer did on his home in Beverly Hills. Indeed, the majority of Pennino’s practice has been devoted to creating warm but sophisticated residences.

Gores wanted Platinum’s identity to be reflected in its interior design. Platinum, which acquires and operates high-tech companies, has expanded rapidly since it was founded just eight years ago. It now owns 22 companies with 15,000 employees and $5 billion in revenue, which is five times the volume the company controlled three years ago. That has meant a steady expansion in office space, from 2,500 square feet in 1995 to 27,000 square feet today.

Gores felt that Platinum’s success should impact its office design, not just quantitatively but qualitatively. “I wanted it to feel warm and open, a place where people could communicate, and I wanted it to be elegant but not stuffy or arrogant,’’ Gores says. “Frank really captures the personality of the company. How do you capture a feeling? That’s a difficult thing to do.’’

Pennino began by lining the office with a plush skin of plantation-raised mahogany and stained anegre, which covers the walls, bookcases, desks, and conference room tables. “This aids acoustically and gives the feeling of warmth and permanence,’’ he says. Within the masculine, dark-wood theme, there are subtle variations in texture and geometry. One office features wall carvings invoking the seasons, which were inspired by stonework on an Art Deco building. The walls of the corner conference room are crafted from undulating blocks, while the straight grain of Gores’ U-shaped anegre desk forms a diamond pattern that becomes a focal point of his office. Pennino updated the traditional wood interior by borrowing from modernism’s past. He paired 1940s chairs and sofas by Lucien Rollin with his own furniture inspired by the same period, and added some Art Deco antiques for complexity.

Meanwhile, 21st-century technology is subtly incorporated in the conference room’s video-presentation equipment, which disappears behind patterned wood cabinets. Computer hookups can be summoned with the flick of a finger from the center of the 12-foot-long marble-and-mahogany table designed by Pennino. And

the 200 office occupants who work behind glass walls can create privacy by activating motorized drapes.

The luxurious feel of Platinum’s mahogany shell is heightened by a carefully edited art collection that consists of three contrasting but complementary types of work: colorful prints by 20th-century masters Alexander Calder and Joan Miró, early Chinese carvings and ceramics from the Han and Tang dynasties, and Norman Jacobsen’s black-and-white photographs of European street scenes.

Pennino softened the formality of the space with lighting that still manages to be effective for workplace tasks. He reduced the overhead lights and introduced “puddles’’ of illumination created by spotlights, dimmers, and lamps. The result is a 40 percent reduction in the amount of office lighting. “Most commercial spaces are overlit, which creates an unusual amount of stress that people are not even aware of,’’ he says. “We were able to effect a savings in electricity, and we continually asked the staff if they had enough light. When you come here, you can’t quite perceive what the difference is, but a lot of it is almost a residential approach to lighting.’’

The human element calls for other delicate calculations, particularly in the area of workspaces and barriers separating desks in Platinum’s largely open interior. With intra-office communication critical to the company’s business, Pennino carefully designed the dividers so that employees would be able to talk to their neighbors but still feel like masters of their own domains. “We got very much into the way people worked, and how they worked in groups, giving them a feeling of privacy but not isolation,’’ Pennino says. “That’s very important.’’

The idea is to reflect Gores’ amiable management style by truly making the office a home away from home. “The philosophy is really that you do spend a great deal of time at your business, and it can’t help but contribute to the sense of well-being,” Pennino says. “And it all has to do with lighting, color, and wonderful textures.’’