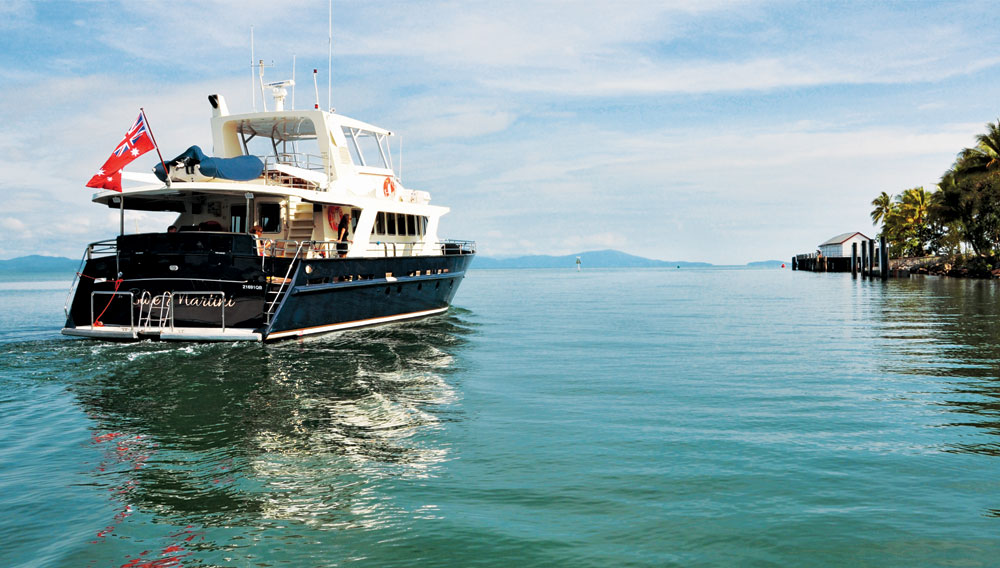 The fishing rod is slipping from my grasp, arcing in front of me like a tree branch weighed down by a fresh batch of snow. “Yank up!” shouts the skipper, Jimbo, from the helm. “Wind down! Don’t let him get away!”

I adjust my footing and focus on Jimbo’s instructions, cranking the reel and bending toward the azure water, then straightening my body and yanking the line. Just when I begin to think the struggle will never end, a glimmer of slippery scarlet—a 20-pound red emperor—appears on the water’s surface. Recharged at the sight of its fiery scales, I pull with every muscle in my body. Moments later, the fight is over, and I pose triumphantly with the jewel-toned behemoth cradled in my arms.

Far North debuted its Blue Water Adventure (priced from about $8,700 per day for up to eight people, with a four-day minimum) in May, taking guests on custom-tailored journeys from Port Douglas to the northerly Ribbon Reefs. Excursions on Black Magic and the center consoles allow guests to fish for any species in virtually any location, from the world-famous Lizard Island to the remote rivers and estuaries near Cape York. In between expeditions, guests can unwind on the four-stateroom Blue Martini, which features large living spaces, a sundeck, and a full staff that includes a private chef. Snorkeling, kayaking, scuba diving, whale watching, and spearfishing are also available.

While nursing a glass of Australian Shiraz on Blue Martini is a tempting way to spend an afternoon, the action on Black Magic proves most alluring. Following my tussle with the red emperor, one of my fellow anglers finds himself in a similar struggle with an enormous—and enormously determined—Spanish mackerel. As the battle lingers on, Jimbo once again thunders inspiration from his perch in the boat’s tower.

“Patience!” the skipper commands. “We’ll have plenty for dinner if you focus on the task at hand and don’t rush.”

Hours later, patience has indeed paid off, as our bellies are full with the sweet and fatty meat of perfectly smoked Spanish mackerel.