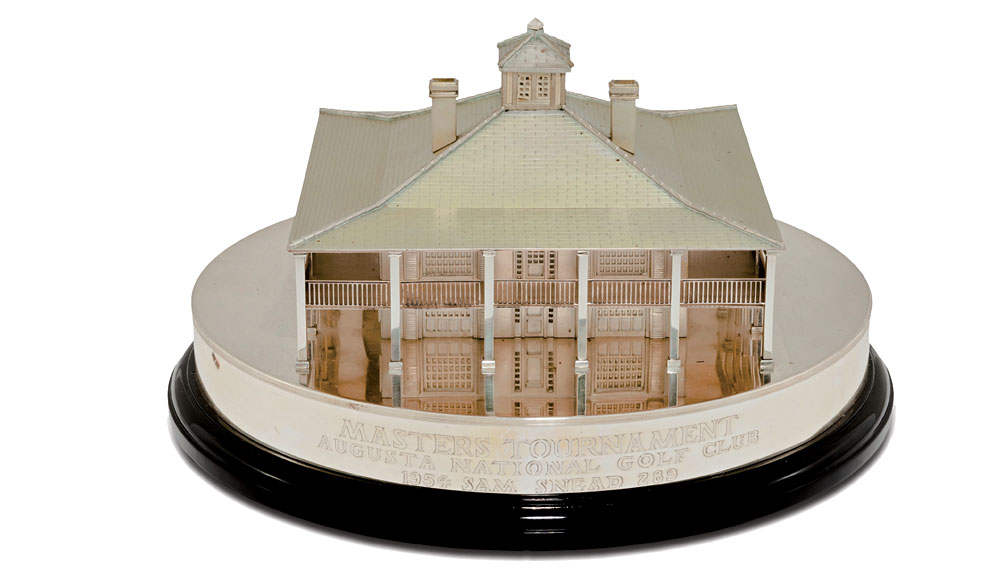 It seemed only a matter of time before the market for Masters memorabilia reflected the annual feeding frenzy for Masters tickets. A turning point may have come last year, when three exceptional Masters-related items made their auction debuts. The most coveted was the green jacket that the Augusta National Golf Club presented to Horton Smith, the winner of the inaugural tournament in 1934. It is the same type of jacket that the club will award at the conclusion of this year’s tournament, which takes place April 10 through 13. Last year’s auction lots also included two of the three Masters championship trophies won by Sam Snead.

The Smith jacket commanded $682,229 in a sale conducted by the aptly named Green Jacket Auctions. The price established an auction record for golf memorabilia. Heritage Auctions sold Snead’s 1954 Masters trophy—the first one ever to go to auction—for $191,200 and his 1949 trophy for $143,400. (He also won the tournament in 1952.)

Long believed to be lost, the Smith jacket had hung in an heir’s closet for decades until that man contacted Green Jacket Auctions, an 8-year-old golf-focused auction house that operates online. “No one had any idea it would go for that kind of money,” says Green Jacket Auctions’ cofounder Bob Zafian, who is based in Denville, N.J. “I knew it was special, and I thought we might break records with it. We had probably seven or eight aggressive bidders on it from all over the world.”

Three years ago, a featured lot at a Heritage auction was a green jacket that belonged to Bobby Jones, the golfing legend who founded Augusta National. It sold for $310,000, which is a Heritage house record for golf memorabilia but is less than half the sale price of the Smith jacket. And the Jones jacket may be the original green jacket. It dates to 1937, which is the year that Jones issued green jackets to all Augusta members, and his jacket is believed to be the prototype for the others. The club began awarding jackets to Masters champions (one jacket per golfer, regardless of how many Masters tournaments he wins) in 1949. That is the year that Smith received his.

Items from the four tournaments collectively known as the majors—the Masters, the British Open, the U.S. Open, and the PGA Championship—generally are the most valuable golf collectibles, and Masters memorabilia ranks the highest among U.S. collectors. It edges out items associated with the British Open, the oldest of the majors, says Mike Gutierrez, the consignment director for Heritage Auctions, in part because the Masters takes place at Augusta National, one of the world’s most exclusive golf clubs. “Its course is part of its mystique,” says Gutierrez.

Zafian says that material emblazoned with the name “Augusta National” can be more valuable than Masters items. In an auction this past winter, Green Jacket sold an Augusta National Golf Club stock certificate signed by Bobby Jones for $9,100. It came from the grandchild of a club member. “I have seen others before,” says Zafian, “and every single one was a counterfeit. The only way you can have this is to be a member.”

Green Jacket always times its spring auction to coincide with the Masters. This year’s sale will take place from March 26 through April 12. Heritage will offer more Snead treasures at an upcoming sale, either in June or in the fall. The auction will not include Snead’s green jacket, but it will feature his remaining Masters trophy.