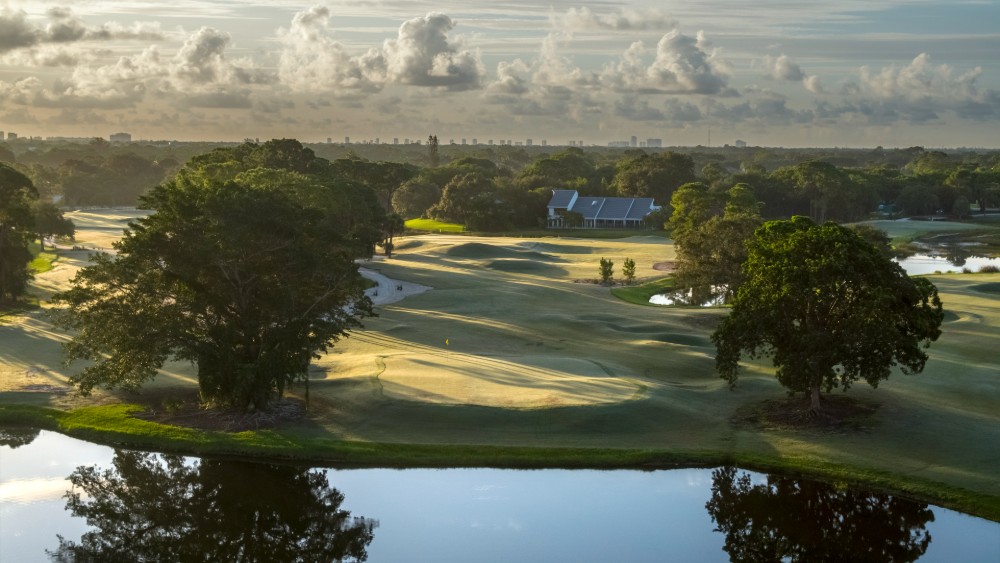 The classically shaped golfing terrain that stretches out in front of me—rolling fairways punctuated by gentle hummocks, elevated greens defined by their pitched ridges and slopes and occasional greenside bunkers shimmering with stark white sand—it’s all bathed in a soft golden light as the sun dips low in the sky. Across these 15 acres, the new short course at PGA National Resort called The Staple—named in honor of its designer, Andy Staples—is a golfer’s playground. It’s a versatile place, too, one that can be an informal venue for beginners seeking a friendly introduction to the game. In the eyes of experienced golfers, however, the course shines as an ideal stage to sharpen short game shots. Of course, it can also be a place just to have some fun.

On a late Tuesday afternoon in mid-January, my buddies and I have the course mostly to ourselves. By the midpoint of our round, we’ve hit tee shots as long as 130 yards and as short as 60 yards. So at the fifth hole—instead of hitting flip wedges to the green from the recommended teeing ground (an area marked by a single Adirondack chair)—we agree to drop balls in a nearby sand trap and test ourselves with a challenging 55-yard bunker shot. On the following hole, we all try our hand hitting putters from the tee. And on the final hole, which features a replica of the sixth green at Riviera Country Club, we take extra time attempting to outdo each other by putting from the front-right portion of the green to the hole cut in the back left section—shots that must utilize the putting surface’s slopes but also circumvent the pot bunker in the center of the green.

These are the games and the challenges that The Staple course inspire. It’s a short course that quickly transports adults back to the days of their youth, where games were played that didn’t require a scorecard and pencil.

In building the course, Staples repurposed the land that was previously home to the first and 18th holes of The Squire course—a layout built in 1983 that was in desperate need of renovation. But The Staple isn’t the only new golfing amenity at the resort. The remaining 16 holes of the old Squire layout were completely redesigned by Staples, who transformed the parcel of land into an 18-hole course specifically built to host non-stroke-play matches amongst friends. “A lot of golfers have played their entire lives and never experienced golf in that setting,” Staples explains. “When they actually get exposed to it, they say, ‘This is the most fun I’ve had on a golf course!’”

Appropriately, the course is called The Match, and it isn’t rated by the USGA, which means there is no “par,” so golfers can’t keep a traditional score. Moreover, there are no tee markers. Holes are measured from the back and front of the teeing areas (the longest hole plays 512 yards), but those starting areas are free-flowing and contiguous (the rear and forward edges are delineated by a single dock pile), which gives players the freedom to tee it up from wherever they’d like. In some cases, a hole’s length can vary by almost 175 yards based on a player’s chosen starting point.

“Every time golfers play The Match,” says Jane Broderick, PGA National’s director of golf, “it can be a different golf course.”

According to Staples, when players of similar ability challenge each other on this unique course, traditional match-play format works best. In that scenario, the winner of a hole determines where they’ll tee off on the next one. When a group is comprised of players with far different skillsets, Staples suggests a two-man team format where six holes are played as a scramble, six holes follow alternate-shot rules, and the final six holes use best-ball scoring. “That’s the Staples roundup,” he says.

From a design standpoint, The Match course is also one that can accommodate players of all ability levels, thanks in most part to a minimal use of bunkers. In place of traditional sand traps, Staples utilized a lot of mounding, where uneven lies can lead to off-balance swings (or unpredictable outcomes)—challenges that equally affect highly skilled as well as not-so-skilled golfers. “With a wedge in your hands and having a side-hill lie 80 yards away from a perched green, it makes you feel engaged,” Staples says. “Suddenly, the course doesn’t feel like it’s [only] 5,800 yards long.

“The concept of designing a golf course that’s challenging for the better player but interesting and fun for the average player, it’s so easy to say,” he continues. “But it’s so hard to knock out of the park.”

PGA National’s two new courses represent only a portion of the significant changes that have been made at the resort. Every guestroom and suite—all 360 of them—has been redesigned and redecorated with nostalgic sensibilities. Those at the resort have coined the aesthetic “1960s Palm Beach chic,” and it’s a fitting moniker. Ironically, the resort wasn’t built until 1980, so instead of restoring the past, this transformative makeover does more to showcase the property for what might have been. Nevertheless, the interior design is so sharply executed that guests may do a double-take the first time they see their accommodations.

Similarly, all of the PGA National’s food and beverage concepts are brand new. The resort’s flagship restaurant, the Butcher’s Club, is the vision of executive chef Jeremy Ford, who cooked his way to victory during the 13th season of Top Chef back in 2016. The upscale eatery, accented by swanky 1950s-inspired décor, specializes in creative presentations of classic steakhouse fare, not to mention exotically spiced side dishes and indulgent accoutrements, such as seared foie gras and winter white Alba truffles. Elsewhere, Lindsay Autry (another Top Chef alum) spearheads Honeybelle, a relaxed establishment that blurs the line between indoor and alfresco dining and serves up Southern and Low Country coastal comfort food. But don’t overlook Birdie’s Diner, which acts as an ideal conduit to the golf courses and serves hearty breakfasts, easy-going lunch fare, and delectable, boozy milkshakes.

During televised coverage of the Honda Classic this week, The Champion course will likely steal all of the spotlight. That’s to be expected, since the bucket-list layout also played host to the PGA Championship and the Ryder Cup during the 1980s. But these new enhancements—and the entire new identity of the resort—are as much a reason to stay and play at PGA National. Golfers may get a thrill playing a course that hosts an annual PGA Tour event, but they’re almost certain to have more fun on the resort’s newest layouts. As Broderick acknowledges, that was always the goal.

“We’ve unbuttoned the top buttons of our golf shirts,” she declares. “It’s not our grandfather’s game anymore. We’re taking it in a new fresh direction.”