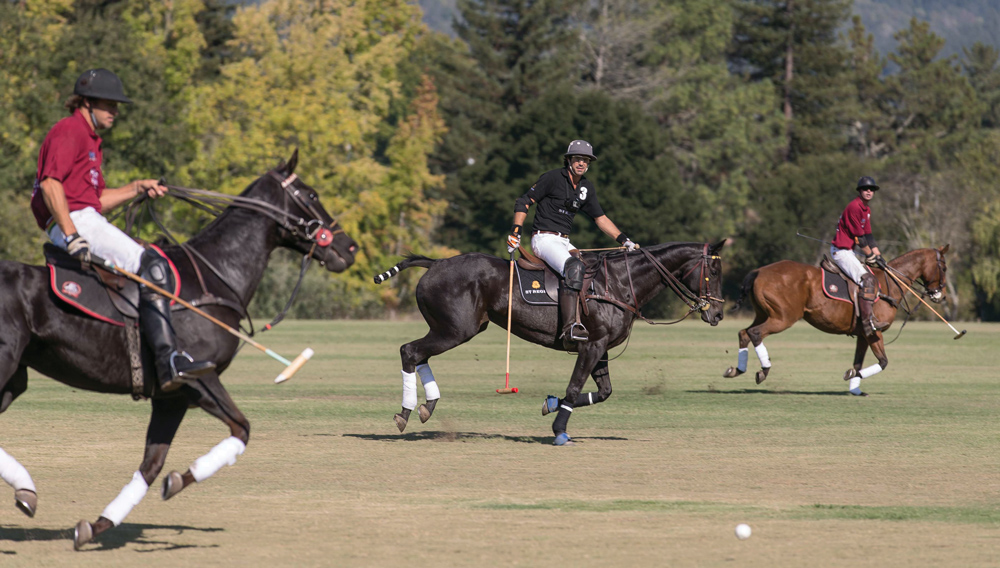 A new program in California wine country offers lessons in the finer—and rougher—points of polo.

Talia’s muscles twitch impatiently under her glossy hide as she dances over the closely cropped grass of the Wine Country Polo Club. Ignacio “Nacho” Figueras is leading the chestnut mare, one of several ponies competing in the inaugural St. Regis Polo Cup in Sonoma, Calif., about 50 miles north of San Francisco. Talia played in the event’s second match—galloping up and down the 300-yard-long Henry Trione field—and now, an hour later, she appears rested and ready for another round.

“Horses always know how serious you are,” says Figueras, a top-ranked Argentine polo player (also featured in this month’s “The Robb Reader”) who led the St. Regis team to victory in the match that ended moments ago, “and how scared you are.” Still in his jersey—the number 3 asserting his position as an experienced goal driver on the four-person team—Figueras is standing in for the veteran polo pro Rafael Hernandez to offer me an introductory lesson in the sport of kings. Hernandez’s hour-long classes for two are part of the St. Regis San Francisco’s new Sport of Polo Aficionado package, which launched last May in conjunction with the St. Regis Polo Cup event.

Though the expert-led course is a new program from St. Regis, the company’s association with polo dates back more than a century. The brand’s founder, John Jacob Astor IV, attended some of the nation’s first polo matches (on Governors Island in New York in the early 1900s), and his original St. Regis hotel frequently housed players and fans. In 2008 the brand reinforced its connection to the sport with the launch of the St. Regis International Cup in England. Today the company hosts about a dozen St. Regis Polo events per year in as many as nine countries.

The second St. Regis event in Sonoma will take place this fall, but the San Francisco property’s Sport of Polo Aficionado package ($3,375 per couple) is available starting in May. Though green riders are welcome, the program is best suited to experienced equestrians, as the lesson can include fast-paced scrimmages with Hernandez. No matter one’s skill level, polo is not for the faint of heart. There is little besides a helmet to protect players from injury, which the sport’s swinging mallets and 1,100-pound ponies can inflict in any number of ways.

“If you’re scared, you’re not showing it,” Figueras says with a nod. I grasp the prickly stubble of Talia’s mane—shaved close to keep from getting tangled with the mallets—and pull myself up onto the saddle. Following Figueras’s instructions, I slip the fabric loop at the end of the polo stick over my right wrist and grip the bamboo handle. Holding the reins with my left hand, I take a few practice strokes, which resemble a golf swing mixed with an underhand softball pitch.

“Balance is everything!” Figueras calls out, reminding me to face my hips forward as I approach the ball for my first hit. “The more balanced you are, the more you’ll help the horse in the game.” Heels pressed down, I stand up out of the saddle and focus on the apple-sized ball. With a dense thud my mallet head meets the mark, sending it bouncing down the field.

Still, even at half speed, the challenge of the sport is evident. Effectively connecting the mallet’s weighty head with the ball while steering a steed can prove a difficult—and draining—task. Soon after missing a tricky “nearside” hit (when the stick is crossed over to the left side), I feel my legs and right shoulder begin to burn.

At the conclusion of the lesson, I dismount and land shakily beside my muscled mare, who has barely broken a sweat. “You did great work!” Figueras declares as Talia is led back toward the stable, and I am almost certain he is talking to me.