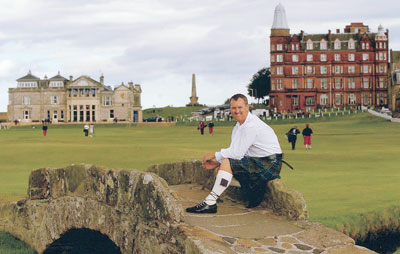 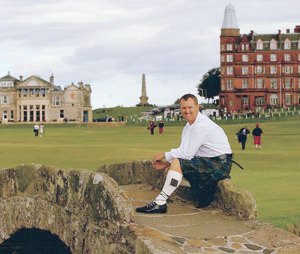 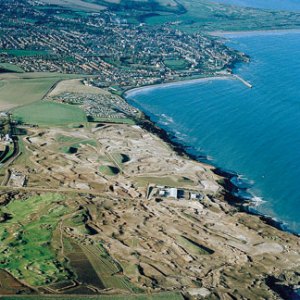 The 30-mile stretch between the firths of Forth and Tay in eastern Scotland is hallowed ground for golfers. Muirfield, Kingsbarn, Carnoustie, and the legendary St. Andrews Links courses all play along this rolling strand of North Sea coastline. But just as Scots always seem to find room for one more wee dram of whisky, developers continue to unearth land for new golf courses, even in a region where farming remains an economically viable activity. Two ocean-view courses—one public, one private—are under construction in St. Andrews, and both promise to add their voices to the siren call that lures players from around the world to the home of golf.

An influx of foreign golfers, however, was not the driving force behind the new project at St. Andrews Links, a public venue that counts the Old Course among its six layouts. “It’s a matter of local demand,” explains Peter Mason, the St. Andrews Links Trust’s project manager for the No. 7 Course, which Scotsman David McLay Kidd designed and is now building. “We are a public facility and have a responsibility to meet the needs of St. Andrews’ residents. There is a huge list of locals waiting for a yearly card.”

Kidd, who is best known for his Bandon Dunes course in Bandon, Ore., immediately felt at home on the No. 7 tract, which occupies centuries-old farmland just beyond East Sands beach on the south end of town. “This looks like Bandon Dunes,” he recalls thinking after seeing the site’s mile-long stretch of 80- to 100-foot cliffs above the North Sea. But No. 7’s setting does not fit neatly into any golf course category. The site is full of loam and clay, and contains very little sand, so the course cannot be called a links, and the lone sycamore tree on the property certainly is not enough to earn it parkland categorization. “The best description I’ve heard is, ‘It looks like sheep are going to rise up over the next hill,’ ” says Kidd. “I like that because we’ve tried to bring the land back to the way it looked in the medieval period, before farming. So the course is contorted and twisted, with tufts of grass sticking out at odd angles. It looks like it wasn’t designed, and that was the plan.”

Construction on No. 7 will be completed by this December, but the Trust plans to grow and cut greens and fairways for more than a calendar year before opening the course in early 2008 (although a soft opening in 2007 remains a possibility). The wait should be worth it. Kidd’s design takes advantage of the site’s ocean views, with seven greens situated on the cliff tops. The 17th hole, which appears destined to become one of the world’s great par 3s, demands a 140-yard carry over a narrow bay to a tiny cliff-side green. The original tract for the course included only the tee area, but Kidd was so taken by the possibilities that he talked the Trust into buying the piece of land for the green. Holes 9 and 18 share a massive double green, which curves around the clubhouse on a V-shaped peninsula overlooking St. Andrews Bay. On clear days, Carnoustie, site of the 2007 British Open, is visible across the bay.

Kidd is well aware of the pressures involved with building a course on what amounts to his country’s holy land. “One of the reasons for the yearlong grow-in is that first impressions really count,” he says. “A bad start could last a generation.”

On the northern end of St. Andrews, American golf course architect Tom Weiskopf faces his own challenges. Weiskopf is working on a course for Yellowstone Club World, a new vacation club that, for fees beginning at $3 million, will offer its members access to private resorts around the world. The course, which will be accompanied by a clubhouse and a stone lodge with about 40 suites for Yellowstone members and their guests, will be the first private golf club in St. Andrews.

Weiskopf is no stranger to breaking new ground in Scotland. “When I did the course at Loch Lomond in 1994, it had been years since an American designed a course in Scotland,” he says. “There was a lot of pressure there. Now the address is St. Andrews. Golf is not a leisure activity like it is in the States. It is serious business.”Like Kidd, Weiskopf does not describe his design as a links. “A links course sits next to the ocean, has a lot of sand, and you can only grow grass on it,” he explains. Although the Yellowstone site runs along the ocean, it features a number of trees and dramatic elevation changes, dropping approximately 150 feet from its highest to lowest points. Still, Weiskopf notes, his design includes several links-style elements. “There will be sod-wall bunkers, lots of heather and gorse, and unkempt areas.”

A long hitter when he played on the PGA Tour, Weiskopf always includes a reachable par 4 on his courses. His Yellowstone design offers two: the fifth and the 15th holes, both of which stretch approximately 330 yards downhill. Five tee boxes present the opportunity to play the course from 5,500 yards to 7,250 yards. St. Andrews Bay and the nearby town compose the backdrop from most vantages.

Scheduled to open in 2008, the Yellowstone course should be in prime condition by the time its neighbor, the Old Course, hosts the 150th British Open in 2010. But for Weiskopf, who is a resident of the Yellowstone Club’s Montana resort—and the designer of its recently opened golf course—his desire to succeed on a personal level far outweighs any pressure to compete with Scotland’s most celebrated links. “[Yellowstone owner Tim Blixseth] is a friend,” says Weiskopf. “I can’t let him down.”