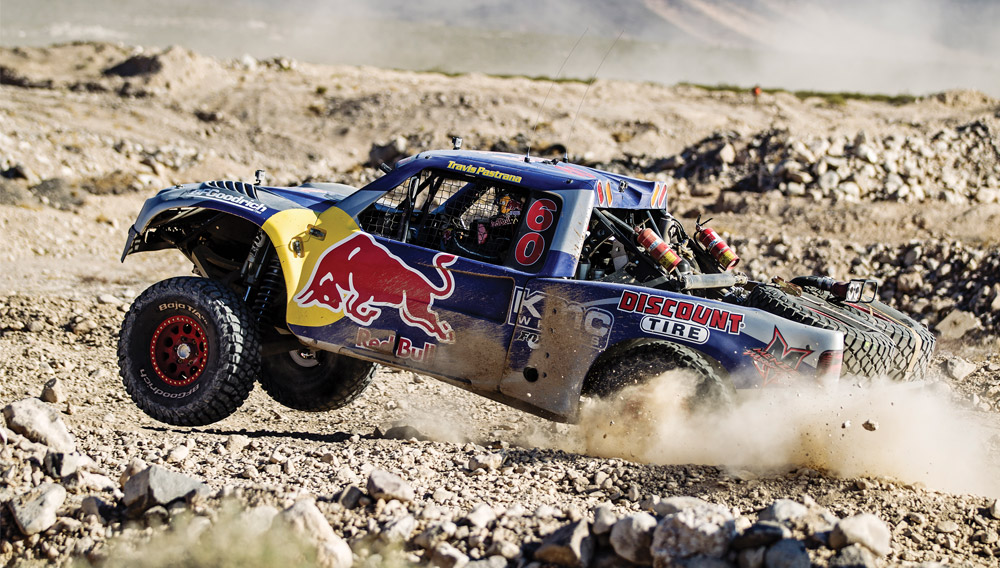 At the Mint 400, a novice takes the wheel of an off-road race machine—and goes for the win.

The buggies start in the dark. Out in the desert a half hour south of Las Vegas, a line of off-road buggies and tricked-out Jeeps stretches into the gloomy blackness beyond portable floodlights. This is the Mint 400 starting line, a seemingly arbitrary slash in the sand marked by a set of traffic lights. There is no yellow, just red and green. And every 30 seconds or so, the green light flashes and the competitors in two parallel lanes gun their engines and charge off into the desert in a spray of grit and dust, the severity of the terrain expressed in the wild dance of their headlights as they move up through the gears. At the first corner, about 100 yards out, a Jeep lies on its side, helpless as an overturned horseshoe crab. Someone’s race ended at Turn 1, and that fact fills me with icy trepidation. Because in a couple of hours, I will be strapping into the driver’s seat of a 200 hp buggy and trying my luck in the toughest off-road race in America.

Desert racing is unique among motorsports in that there are opportunities for novices like me to show up and compete. (Try doing that at, say, the Daytona 500.) The concept is called arrive and drive, which pretty much sums up the requirements. You do not need your own race team, sponsors, or competition license. Outfits like Zero One Odysseys—which, during other times of the year, hosts buggy adventure tours across the desert—will set you up with a race vehicle, pit support, a navigator, and a day of training. You pay the requisite amount of money—in this case, $17,500—and you are in a position to win a trophy.

Among the 330 competitors who showed up in March for this year’s Mint 400, Red Bull fielded a team in a Zero One buggy, a custom-built race machine with a rear-mounted Subaru motor and suspension travel that makes a Ford Raptor look like a Conestoga wagon. In addition to yours truly, the team includes Denver Broncos defensive end DeMarcus Ware and television personality Sal Masekela. Each of us is allotted 100 miles of wheel time—one full lap of the course. The modestly powered buggies and Jeeps run in the morning, while the monstrous “trick trucks,” some of them packing twin-turbo V-8s and costing more than a half-million dollars, race in the afternoon. The morning racers get three laps; the trucks are fast enough to squeeze in four.

Masekela and Ware split the first lap, switching drivers at the midpoint pit stop. I vow to run the entire second lap before handing the car back to my codrivers for the third lap. By the time I arrive at the predawn starting line, Masekela is already out there in the boonies, having taken the green flag at 6 am, when the streets of Vegas are still dotted with stragglers who have yet to go to bed. I watch the last of the competitors roar off and then walk over to our pit area to await the return of car No. 5501.

A full lap in a buggy like ours can be completed in about two hours. That is, if everything goes perfectly. But seldom do you get a perfect lap in the Mint 400. Over the radio, I hear chatter of setbacks: Masekela is stuck. Then Ware gets a flat tire. Have you ever changed a flat by the side of the road? Imagine doing it on uneven, rocky terrain as buggy-driving maniacs steam past at full throttle, trailed by a lung-choking dervish of airborne Nevada silt. Flat tires are to be avoided, to the degree that is possible when your racetrack is liberally sprinkled with razor-edged, rubber-shredding rocks.

Despite the early travails, Ware brings the car back around to the pits in good working order. Now it is my turn. I plug an air line into my helmet and, feeling not unlike an old-timey deep-sea explorer, jam the shifter into first gear and set off. Veteran off-road racer and all-around Zero One fixer Jim Hancock is riding shotgun, having volunteered to serve as codriver during my lap. “If you’re doing something wrong, I’ll punch your shoulder,” he says. “Some guys I’ve driven with have ended up pretty black-and-blue.”

Every off-road racer I asked about the Mint warned me to take it easy at first, to get a feel for the buggy and let the adrenaline boil off before ramping up the pace. The best strategy is to figure out exactly how fast you can go and then dial it back just an iota, to leave some room for error. This is not a racetrack where you hit the same apexes with the same surface every two minutes. A 100-mile desert course is an exercise in ongoing improvisation, and your ability to react is probably more important than any classroom driver training you may have.

Despite this valuable wisdom bouncing around my skull, as soon as we get to the quarry I start trying to drive like Robby Gordon. The quarry is close to the starting line and it is a huge spectator area, with hundreds of fans lining the corners and brandishing cameras. I drop down a gear, mash the gas, and kick the rear end dramatically sideways out of a corner where a cluster of professional photographers are aiming Hubble-size lenses at our car. Hancock punches me. “You notice how you started driving when you saw the photographers?” he asks. Point taken. I was showing off. Driving a racecar in front of a crowd is an unprecedented rush and I did not want to disappoint. I am Russell Crowe in Gladiator right now. Are you not entertained?

Soon, though, I settle into a rhythm and Hancock nudges me to up the pace. Some sections of the course, like King Kong Wash, are boulder-strewn moonscapes where 25 mph feels like stepping into the ring with Mike Tyson in his 1980s prime. In other places, the course opens up to smoothly undulating washes where we sail along in fourth gear at maybe 75 mph, the sandy ruts acting as rails. Just when I start thinking, “Hey, this isn’t so hard,” there is a sharp jolt from the back, as if we were rear-ended. “Did somebody just hit us?” I ask before having my question resoundingly answered by another hard hit to our bumper—this, mind you, while we are already traveling at highway speeds over a surface that offers only the barest suggestion of a road. But somebody back there in the dust has a faster buggy and this is how faster traffic announces itself, Mint 400–style: by ramming your bumper. You cannot hear anything over the wail of your own motor and you cannot see because of the dust, so the bumper-tap is the way to announce yourself. I yield.

While it is now obvious that there are faster buggies than the Zero One, there is also slower traffic—Jeeps and smaller buggies—that must be dispatched. I cannot fathom rear-ending someone at speed, so when we are impeded by a slower buggy I bide my time till the course splits into two parallel tracks. When the buggy goes right, I go left and floor it, watching it recede in my peripheral vision just as my lane ends and spits me out ahead. “Yeah!” Hancock shouts as he punches me in the shoulder. “That was a good punch.” I have just passed someone in the 2014 Mint 400 and behind my dust-caked visor there is a huge, huge smile.

Soon the course spills out onto the dry lake bed—dubbed the Warp Zone—and the Zero One hits its rev limiter in fourth gear, perhaps 100 mph. When the big trucks come through here later, they will be doing 130. Then it is back into the scrub brush and rocks, the mile markers seeming to count off faster now. We stop to pull a stuck buggy out of a ditch. Out here there are constant reminders of what can go wrong—wrecked vehicles, drivers frantically changing tires—so perhaps our stint as tow truck will help our racer karma, if not our overall time.

By the time the pits loom into view, two hours and 29 minutes after we left, I am sad my time is up, even though my mental and physical exhaustion is complete. Masekela and Ware have had enough too, so Hancock takes over for the final lap. He brings us from fourth place up to third, good for a podium finish. Of the 330 vehicles that started the race, less than half of them make it to the end. The Mint 400 is brutal. It is savage. It is more than a little dangerous. And I already want to go back.

The Mint 400 is the main event in desert racing in the United States, but Zero One and other outfits field teams for that race and others throughout the year. Overall, there is nearly one event every month, and the next big one is the General Tire Vegas to Reno, August 14 to 16. Here are three arrive-and-drive options, with specifics on the Mint (www.themint400.com).

Zero One’s 2015 Mint 400 package ($19,500) sets you up in a buggy with full pit support. Prior to the race you get a day of training and the chance to drive your race machine down the Strip as part of a massive parade. All the buggies in this class are identical, meaning that your driving skill (and luck) are the primary determinants of success. The Zero Ones attract serious drivers—Patrick Dempsey won the class in 2013. www.zerooneodysseys.com

Vegas Off-Road Experience, known as VORE, rents truggies—truck-bodied buggies—with 24 inches of wheel travel and a 275 hp Ford V-6. They are a step up from the Odyssey buggies in terms of speed. If you do not want a full-on cross-country race, VORE also runs a 1.5-mile short-course track in Las Vegas. Its 2015 Mint 400 package ($18,000) can be upgraded to include helicopter video footage of your driving heroics for an additional $2,500. www.vore.com

Driven Experiences rents Trophy trucks, those V-8-powered beasts that run in the fastest classes. Driven’s trucks are 435 hp, with about three feet of rear suspension travel. The trucks cost $65 per race mile, or $26,000 for next year’s Mint. Driven also has trucks available for the Vegas-to-Reno race. www.drivenexperiences.com