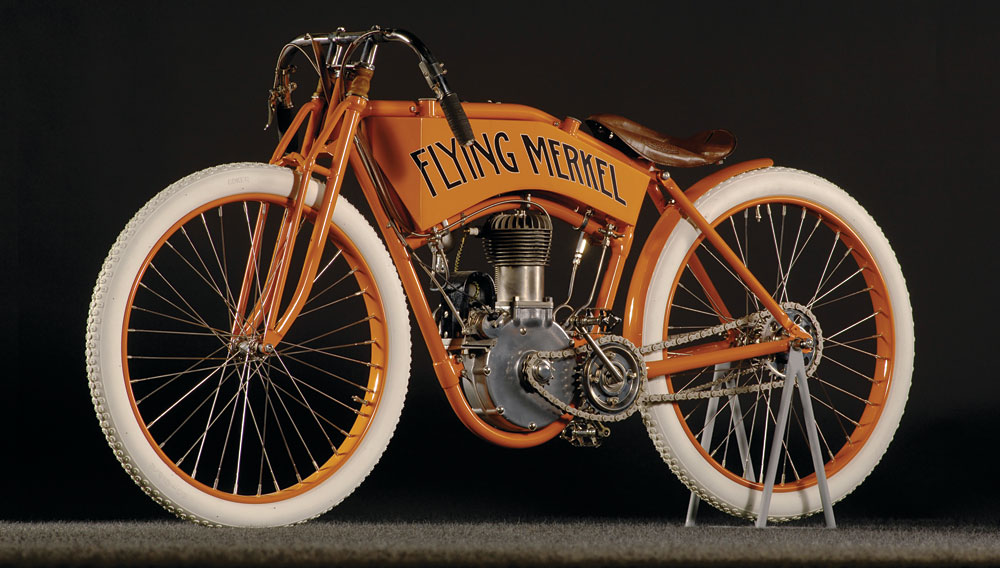 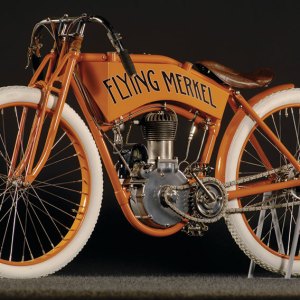 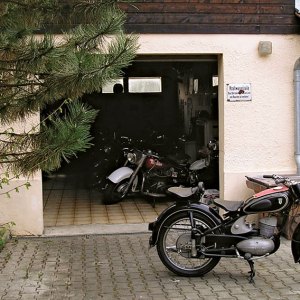 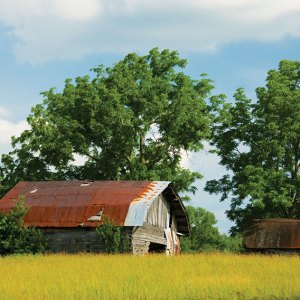 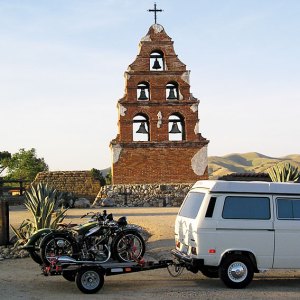 Like Stephen King’s character Ellis Boyd Redding in The Shawshank Redemption, Blue Nel­son is “a man who knows how to get things.” He’s made a part-time career out of it, though his regular profession follows in the line of three generations of television and film producers. When Nelson’s not working on a Hollywood set, chances are the 45-year-old can be found scouring through sleepy hamlets and rural towns the world over in search of rare vehicles stashed in barns, garages, basements, and other obscure locations that might be capable of concealing an antique car or motorcycle.

On a sun-soaked July morning in Monroe, Wash., Nelson is traipsing through an alfalfa field. Accompanied by the farmer—who’s decked out in overalls and work boots and has brought along a beat-up tractor for assistance—Nelson plans to excavate the deteriorated hulk of a Mercedes-Benz W115 coupe that is buried in the overgrowth of blackberry brambles on the edge of the property.

Over the years, Nelson has established a reputation for being a mechanical bounty hunter. Often he is approached by collectors who are hoping to find a specific vehicle or bike but who offer little, if any, information on the object’s specific whereabouts. Sometimes those collectors can provide Nelson with a general location, though in most cases, that direction is nothing more than folklore—for example: “I’ve heard that there’s a Crocker in Waverly, Alabama. Can you find it?” Other times, Nelson’s clients won’t have any specific information at all to share. When that happens, Nelson must rely on his own network of sources and his intuition to track down the desired object. “When other people fail, they call me, and I deliver,” he says, “which is why I’m asked to do what I do.”

Nelson’s current expedition to Monroe is for such an assignment, but the Mercedes-Benz is not the vehicle that Nelson was after. He found that vehicle, a 1967 Volkswagen camper, earlier in the day, and while waiting for a money transfer to clear (which he’ll use to cover the Volkswagen’s transportation costs back to Los Angeles), Nelson hopped in his rental car to survey the other outlying fields and farms in the area. As Nelson explains, he generally starts at the town’s most derelict service garage and will chat with the mechanics to learn of any vintage cars or motorcycles that might be collecting dust in the area. “If you don’t ask,” he says, “the answer is always no.”

Given his affinity for mid-20th-century Mercedes-Benzes, Nelson was overjoyed when he caught a glimpse of the aging W115 coupe’s roofline, and he quickly sought out the farm’s owner to inquire about purchasing it. While such an experience likely would be a rare occurrence for most collectors, the series of events is just another day in the life of Blue Nelson. His exploits and his abilities as a man who knows how to get things are well known throughout the network of collectors who, over the years, have entrusted him with their money and their dreams of owning a rare automobile or motorcycle. But it’s unlikely that most know of Nelson’s own private collection of rare motorcycles—a collection that’s defined by the compelling stories that each bike can tell and the stories of each motorcycle’s unlikely discovery.

as so many younger siblings do, Nelson found that his life and, more specifically, the limits of his allowances as a teenager rested on the behavior of his older brother. Unfortunately for Nelson, his brother fostered many reckless tendencies. For example, when Nelson’s brother ended up in the hospital after crashing his motorcycle, Nelson’s mother forbade her younger son from riding a bike of his own. “Don’t you even think about it,” she told him.

What his mother couldn’t know then, and what Nelson never revealed to her—not until this profile was published—is that his love of motorcycles would override any parental rules. He bought his first motorcycle, a 1965 BMW R50, when he was 15 years old, and he spent the better part of six months putting it together. It was a lengthy project because Nelson started only with boxes full of parts, he had no prior experience or knowledge of motorcycles, and he had to work on the bike and keep it hidden in the basement of a friend’s house about 15 miles away from home. “I didn’t do it just because my mom said I couldn’t, but partially for that reason,” he says of his motivation to buy the bike, which remains a permanent part of his collection. “It’s like your first date or your first girlfriend. It’s the one that got me into everything else, so it’s a significant milestone.”

“Everything else,” as Nelson describes it, is an assemblage of rare motorcycles that at its height, about five years ago, contained 40 rare bikes. These days, the collection numbers about 20—a refinement that Nelson felt was necessary, but one that continues to require discipline. “One of the most difficult things in collecting is having less than more,” he says. “Go to an art museum and look around. Are there 5,000 pieces of art in a room, or are there 10 paintings on the wall with a bench in the middle? It’s more difficult to have less and to display it properly.”

The list of bikes that Nelson has sold reads like a bucket list of holy-grail acquisitions for most motorcycle collectors. He’s parted ways with a Harley-Davidson WLA Liberator, a Flying Merkel, a Brough Superior SS100, and a BMW R32, among others (though Nelson is hoping to reacquire an R32). He believes that his tastes and his understanding of his collection have matured in recent years, and now he’s only interested in bikes that capture the flowing lines and aerodynamic styling of the Art Deco period, but still have a story to tell. “If a bike looks like rolling, functional art, I’ll keep it in my garage,” Nelson says. “That’s the one-word catchphrase that constitutes what I’m going to keep.”

from a narrative standpoint, there’s one motorcycle that stands out from the rest within Nelson’s collection. That bike, a 1932/1933 Zündapp K500, was unearthed during a German home remodeling project about seven years ago. Nelson explains that, leading up to World War II, the German army confiscated every piece of civilian machinery that it could find to use in the country’s war effort. Since not every German citizen welcomed that opportunity to “contribute,” many went to great lengths to hide cars, motorcycles, and even horses.

The Zündapp was found in a fake wall built specifically to conceal it, and after hearing of the discovery, Nelson quickly made a trip to Germany to inspect—and ultimately purchase—the bike. “There was a prewar, nonglorified, civilian bike,” Nelson says, recalling his first glimpse of the motorcycle and explaining that its civilian status made it all the more exciting. As the collector discloses, many motorcycle enthusiasts are enthralled when they see an iron eagle stamped on a war-era German motorcycle, but Nelson knows that most motorcycles that survived the war will bear that mark, because the army seized so many civilian machines. It’s significantly rarer to find a German motorcycle without it.

In this manner, Nelson often finds himself swimming against the current of popular motorcycle-collecting tendencies. For example, Nelson’s father was instrumental in the creation of Happy Days, so Nelson recently was called to verify the authenticity of a 1949 Triumph Trophy 500—a bike that Arthur Fonzarelli occasionally rode on-screen over the course of the television program’s 11 seasons. Nelson recalls the excitement surrounding the bike, especially after he confirmed its identity, but he admits that the bike doesn’t interest him at all. “It’s Fonzie’s bike or it’s Elvis’s bike, but that’s not enough for me,” he says. “I’d rather find a more interesting and compelling reason to keep it. It must be old, and it must be cool, and it must have an interesting story.”

That brings Nelson back to his Zündapp K500, which provided him with more than just a story about its discovery. After he acquired the bike, Nelson brought the motorcycle back to life and rode it through Belgium and the Netherlands en route to the United Kingdom—more specifically, the Isle of Man. Getting the bike running again, after it had languished through about 70 years of neglect, wasn’t too difficult for Nelson, since he believes a vintage motorcycle is mechanically less complex than a vintage automobile. The bigger challenge, according to the collector, is the psychological hurdle that must be overcome. “If you get the car running and something fails mechanically, you can pull over,” Nelson explains. “If you don’t get the bike properly running and something fails, it can cost you your life. If you get a blowout, for example, because you didn’t change the old tires, because you were romancing about a 60-year-old Dunlop, well . . . there goes the romance.”

Still, Nelson declares that a vintage motorcycle is “the best mode of transportation to take you into the past,” and based upon his experiences on the Isle of Man, he discovered that plenty of enthusiasts share that belief.

Nelson’s final destination was the Isle of Man TT (Tourist Trophy) races, where he intended to compete in the classic division. Considered by many to be the most famous motorcycle race in the world, the Isle of Man TT attracts the most avid motorcycle enthusiasts from around the globe each summer, and it was Nelson’s interaction with that crowd that solidified his love for the Zündapp. As Nelson tells the story, the finicky bike (which broke down often on his journey from Germany to the U.K.) broke down again at the start of the race and continued to break down over the course of the event. That might sound like a nuisance, but Nelson claims it was the best repercussion of the race.

Each time Nelson pulled the Zündapp into the pits, it drew the attention of all the other pit crews, who were fascinated by the old German bike and determined to keep the relic on the track. “That camaraderie typifies the motorcycle world,” he says. “Once you’re on your bike, everyone is family. I never finished the race, but it doesn’t matter; I ended up meeting the most interesting people.”

following his debut at the Isle of Man, Nelson entered the Zündapp in the Love Ride, a charity motorcycle ride through Glendale, Calif., but the bike continued its finicky ways. Nelson finished the event, but the engine completely seized up on him shortly thereafter. Not wanting to risk shipping the engine to a Zündapp specialist in the Alps, Nelson instead packed a bag (and his engine) and flew to Germany to hand-deliver the motor to that specialist.

Unfortunately, Nelson lost touch with the mechanic and, as he explains, “By the time I got my act together, he had sold the motor.”

To date, Nelson is working to track down the whereabouts of his antique German motorcycle engine, which to any normal collector would be a daunting—if not impossible—task. But Blue Nelson is not a normal motorcycle collector, and he’s not intimidated by the mission. After all, he’s a man who knows how to get things.