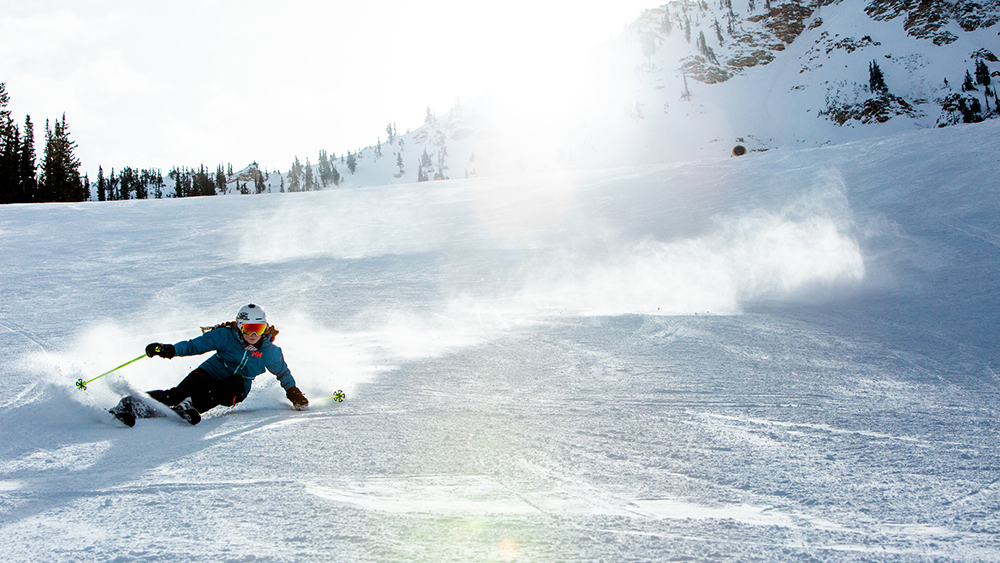 My first time out skiing this winter I got caught in an early powder storm at Deer Valley in Utah. The mountain got pounded with 24 inches in just two days. So, on opening day, instead of skiing the resort’s legendary groomed runs, I pushed off at 9,500 feet and promptly sank deeper into drifts of snow with every turn. I needed some powder skis, pronto.

Growing up on the east coast as I did, you learn to ski in the most miserable conditions of icy trails and bitter cold winds. If you’re lucky, you get some heavy, wet white stuff that eventually skis off into ice. But you learn and believe if you can ski in that, you can ski in anything. I’m here to tell you, that just ain’t true. You get the wake up call the first time you head out West and ski bigger mountains with mounds of fluffy stuff that doesn’t even make a good snowball. And you sort of fall in love. With the winter, the mountains, the snow. Until you sink down in your narrow, ice-shredding skis.

After the Deer Valley debacle, DPS came to my rescue. Founded by a pair of powder addicts—one a longtime ski engineer, the other a ski designer and pro skier—in Salt Lake City, the company makes some of the most sophisticated off-the-shelf skis out there. I needed something wider underfoot that would allow me to float on top of inches (or feet) of new snow but still let me carve up the corduroy on groomer days. They suggested the Alchemist Uschi 94 ($1,299). Great for powder and skiing the glades, but also a solid all-mountain ski.

At Montana’s Big Sky Resort I made first tracks in them at 8 am off the Swifty lift after a major four-day dumping. The silent glide of the skis was exhilarating and addicting. The only sound was the distant boom and crack of avalanche guns. My legs hardly felt like they had to work. Powder can slow you down, but these skis still kept up the speed, partially because of DPS’s new Phantom treatment. It’s like a wax, but not a wax, because it’s permanent. You only need to apply this base coat once, ever. It gives both grip and slide. The regular reaction I got from most skiers who saw it in action was, “That’s rad.” And they were right.

I also tested the skis in Tahoe on Northstar’s expertly groomed runs. Only a few inches of powder fell over three days so it got skied off pretty quickly—a real test of the Uschi’s all-mountain capabilities. And they delivered. They shredded the mile-long-plus steep, slick black diamond runs like Burnout and Challenger on the Backside of the summit.

For the techie skiers out there, one of the reasons the DPS skis are so beloved is because of their combination of space-age carbon-fiber construction and pioneering designs and shapes. That carbon makes them lighter than many other traditional alpine boards made with fiberglass, but also stronger and more dynamic, so they don’t rattle over rough spots and they have an “infinite flex life,” says DPS’ Alex Hunt. “Carbon fiber retains its shape and strength much longer than other materials. That’s why high-end sports cars and aircraft use it.”  much more than the traditional fiberglass ones. The company, founded in 2005, created the first pre-peg, carbon-fiber sandwich ski—a layer of wood sits inside the carbon-fiber sandwich, the first 120mm-waisted powder ski with a pintail end (sort of like the Uschi’s tail, above), the first rockered ski with a sidecut, and the Spoon—a convex three-dimensional shoveled ski with radical edge bevel.

When it came to developing the Phantom coating ($99, plus application), the story is part collegiate genius and part thanks-Mom. Founder Stephan Drake’s mom told him about a TV segment she’d seen on MIT students who invented a new surface for the inside of ketchup bottles to make the ketchup flow out more freely from the bottle. She suggested maybe something like this could be used on skis to help them glide better on snow. DPS realized his mom was on to something and they contacted professor and materials engineer Jeff Bates at the University of Utah. Bates took on the challenge and got Phantom started.

So far, the skis have been transformative. While no one is going to ask me to join the US Ski Team anytime soon, I am definitely mastering powder runs and enjoying both the tranquility of powder skiing the adrenalin of some fast pistes, thanks to these skis.