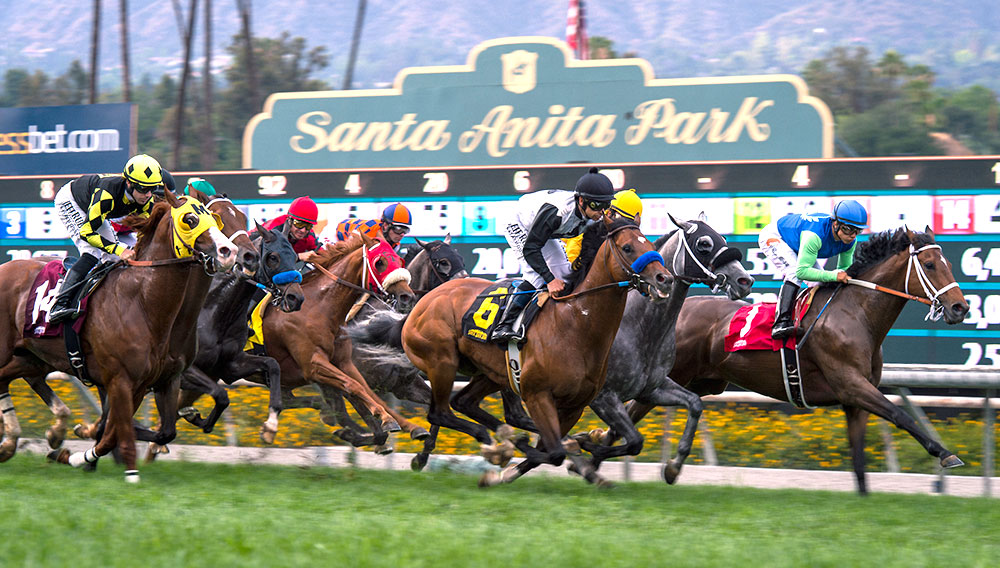 Like many sports enthusiasts, horseracing comes on our radar maybe three times a year—the Kentucky Derby, Preakness, and Belmont Stakes—and even then, only when there is a contender for the Triple Crown. But although we do not follow the sport closely, an afternoon spent lounging in luxury in the newly renovated suites at Santa Anita Park in Arcadia, Calif., has the potential to convert any fair-weather fan of the ponies into a diehard devotee.

Recently, a group of us on the Robb Report editorial staff were invited to experience the esteemed track (home to famed thoroughbreds Seabiscuit and American Pharoah) in one of these new suites, part of a three-year, $40 million renovation project completed by the firms AvroKO and Shawmut Design and Construction under the direction of developer Billy Lehman. First opened in 1934 by the Los Angeles Turf Club, Santa Anita Park—beautifully backed by the San Gabriel Mountains—is one of the sport’s most picturesque venues on the planet and has been a natural draw for Hollywood’s high rollers since its inception. Architecturally striking, Santa Anita showcases a streamlined art deco design (dressed in chiffon yellow and Persian green) that permeates throughout.

Our passcode-protected, third-level suite—one of 13—proved a multisport Mecca, flanked with nine flat-screen televisions tuned either to other races or several simultaneous college football games. The bi-level suites—built from scratch as part of the renovation—provided ample seating (accommodating 10 to 40 guests), retractable glass windows, catering and beverage service, and a private wagering machine. Just below the suites, over 1,200 renovated boxes (equipped with new media panels, chairs, and fabric enclosures) provide an up-close view of the action.

Those in the group gambling on any of the day’s nine races were guided by the suite’s own Betting Concierge, Sean, who demystified terms like “trifecta” and “exacta,” and offered neophytes advice. “Numbers and names,” said Sean, “if you’re just here to have fun, bet numbers and names.” Counsel that was collected on, as a fellow first-timer hit it big in the second race with horse Mac Daddy Mac—parlaying $4 into $56 before ultimately taking home a profit of 43 cents. Another in the crew counted on the No. 3 to come through every time, a suspect strategy until he came away the ultimate winner.

Between races, many of us meandered down to the newly rejuvenated Chandelier Room, its namesake crystalline decor ubiquitous above. Lehman and his team worked with the Los Angeles Conservancy to stay true to the room’s 1930s roots while also transitioning it into a more modern venue.

Alongside historic elements such as artwork from the racetrack’s archives and four original chandeliers, the room touts a redesigned bar and a barrage of glass windows and doors on the second story. One entrance room showcases a Harley-Davidson motorcycle and sidecar from 1934 (the year of Santa Anita’s inception), while another displays a set of saddles so small it is hard to believe they are actually used in the races.

In time for artisanal fare from guest chef Steve Samson of Sotto Restaurant in Los Angeles, we dined amidst the sonic backdrop of the Ryan Cross Trio. (Those who prefer an alfresco dining experience can make their way to the recently refurbished Club House Terrace, which features glass enclosures, all-new dining tables, flat-screen televisions, and nearby betting stations so guests can soak in the sunshine while keeping tabs on the races.) For a Champagne chaser, our host surreptitiously led us to a VIP speakeasy known by rumor alone. The invite-only enclave is accessed through a nondescript door that opens to a narrow tack room replete with equestrian accoutrements and the aesthetic of a storage closet. When activated, the back wall opens to reveal a small but sophisticated sanctuary. Set in dark wood with leather furnishings and anchored by a polished bar, this is where the A-list lounge.

After glimpsing the speakeasy’s glamour, it was off to the Paddock Gardens to view the horses competing in the fifth race, named in Robb Report’s honor. A steed named Fast Magoo lived up to his name and finished first, then patiently posed with us in the winner’s circle before being led away to enjoy the spoils of his victory. Back at the suite, it was only after witnessing Bob Baffert’s horse Dortmund dash the competition in the eighth did most of us cash it in and head for the gates.

Before passing the life-size statue of Seabiscuit on our way out, we paused to watch Baffert be interviewed while Baseball Hall-of-Famer Tommy Lasorda stood behind him, both living legends that seemed a natural part of this rarified landscape and its pedigree of champions. And though a few of us are not gamblers, it is a safe bet that we will be back after live racing returns December 26, if only to once again experience Santa Anita Park’s prominent place in the sport’s rich legacy of numbers and names. (santaanita.com)