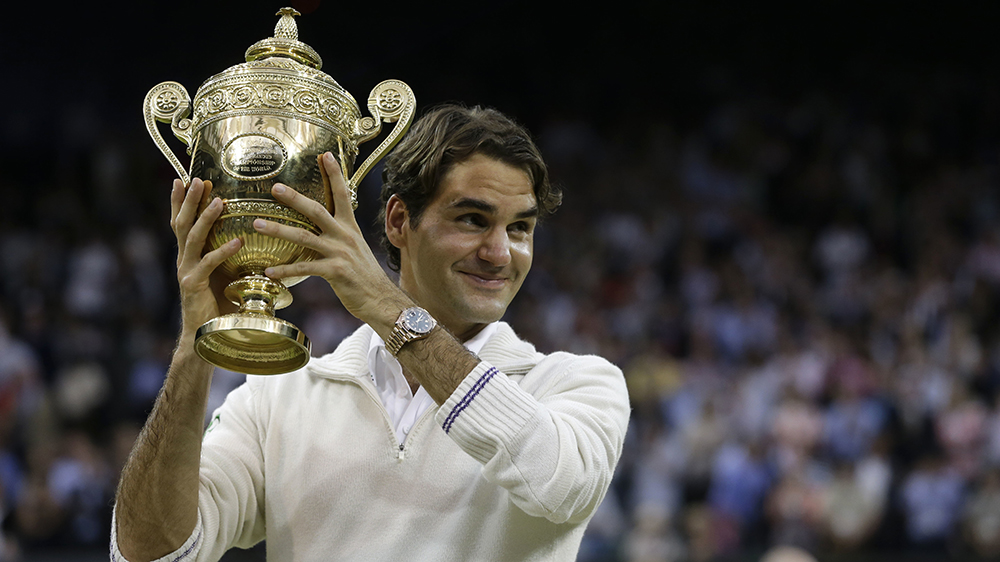 Collectors will soon have a chance to score some of Roger Federer’s ace tennis memorabilia. Christie’s is serving up a selection of the Swiss Maestro’s coveted collectibles during two blockbuster auctions this summer.

The sales, taking place in June and July, will celebrate Federer’s illustrious two-decade career, during which he scored no less than 20 Grand Slam wins to become one of the game’s true greats.

The comprehensive collection comprises rarities that range from roughly $4,200 (£3,000) to $97,500 (£70,000) in pre-sale estimates. All proceeds raised will go toward The Roger Federer Foundation to support its efforts empowering children through education.

Lot 17: The RF cardigan and racket from his victory over Andy Murray in 2012.  Christie's

The first auction will be held live at Christie’s London on June 23. It will feature 20 lots that each correspond to one of Federer’s historic Grand Slam titles from either the Australian Open, the French Open, The Championships Wimbledon or the US Open.

Lot 10: The outfit and racket from the Wimbledon finals that Federer played against Rafael Nadal in 2007.  Christie's

Another standout is the entire outfit and racket that Federer donned during his famous win against Robin Söderling at the 2009 French Open (approx. $70,000 to $98,000). This lot even includes his shoes that are still covered in red clay dust from the courts of Stade Roland Garros.

“Every piece in these auctions represents a moment in my tennis career and enables me to share a part of my personal archive with my fans around the world,” Federer said in a statement. “More importantly, the proceeds will support The Roger Federer Foundation to help us continue to deliver educational resources to children in Africa and Switzerland.”

Lot 13: The outfit and racket from Federer’s famous victory over Robin Söderling at the French Open in 2009.  Christie's

The online sale, meanwhile, will run from June 23 through to July 14. It comprises a total of 300 pieces with more accessible estimates that start from roughly $140 (£100). The memorabilia charts Federer’s career from the seminal Sydney Olympics in 2000 all the way to matches that occurred this year. This sale includes everything from caps and wristbands to a Wimbledon blazer.

“The match objects will bring back fond memories to us all and provide a unique opportunity for Roger’s global fans to own a part of his outstanding, two decades long tennis career,” Bertold Mueller, managing director of Christie’s Europe, Middle East and Africa, added. “The sports memorabilia market has been booming for years, in particular for match-worn and signed pieces. The auctions will no doubt be a milestone in this ever-growing, worldwide phenomenon.”