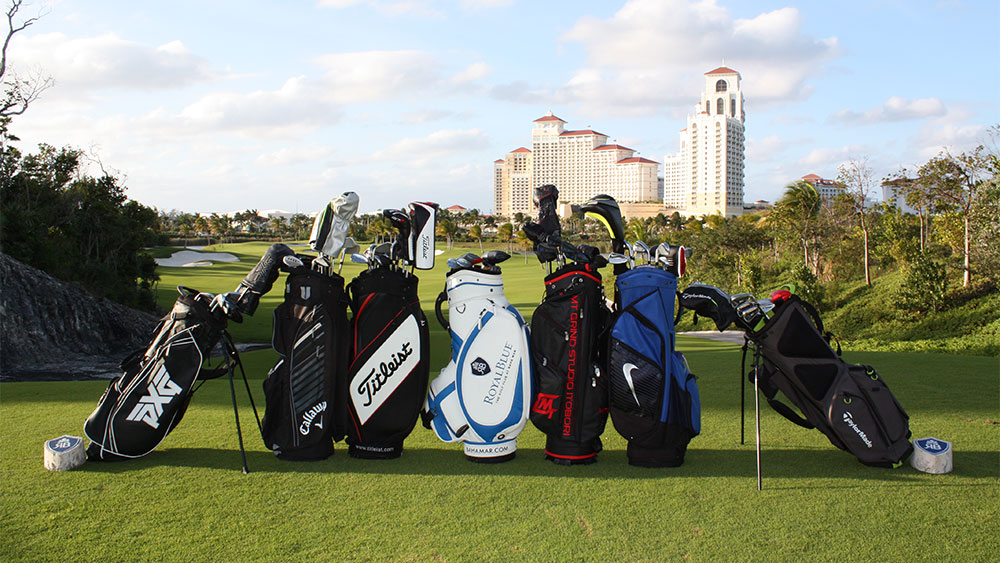 Ten minutes into a warm-up session before my first round at the Royal Blue Golf Club at Baha Mar resort in the Bahamas, I hit a 7-iron from a set of forged Itobori clubs—an exclusive Japanese golf-equipment brand that charges about $12,000 for a fully stocked bag. By way of comparison, I pull a 7-iron from a set of PXGs and hit the same shot. The resulting ball trajectory is similar, but the distance with the PXG club is better. More important, the shot feels better.

The opportunity to hit clubs made by Itobori and PXG—as well as current models from Titleist, Taylormade, and Callaway—is possible thanks to Royal Blue’s “better-than-your-own” club rental program. For $350 ($55 more than the club’s standard greens fee), guests can enjoy the “all-in” package, which includes rental clubs, rental shoes (if needed), and two sleeves of Titleist Pro-V1 golf balls. The rental program, combined with the club’s free-flowing tee box system, has created a unique resort golfing experience, one that could someday change the way other public and private courses—in all parts of the world—manage and deliver the game.

As Royal Blue’s head golf professional, Andy Deiro explains that the club’s rental program was born out of a desire to elevate the traditional rental-club experience in which players are given few options—usually only a choice of regular- or stiff-shafted clubs. Beyond that, Royal Blue guests who rent clubs are provided with an opportunity to test out equipment and to learn which clubs work best with their swings—all under the supervision and guidance of a team that includes the Bahamas’ national amateur champion and highly skilled players who have competed in events on the Web.com tour and with the LPGA.

“The allure of those clubs is the fact that they’re very expensive,” Deiro says of the Itobori sets in the club’s rental program. “You hit them for two reasons: One, you’re a very good player, and you like the feel of a more traditional, forged golf club. Or, you’re the person who says, ‘They’re $12,000 a set, and I’m going to play with them, and I don’t care how I hit ’em because I’ve never done it before.’”

Despite the exotic nature of the Itoboris, it is Royal Blue’s eight sets of PXG clubs that sell out of the rental program on most days. If that should happen—and a guest who wanted to play with the PXGs is unable to—Deiro and his team will do their best to reserve a set for the guest if he or she has another round scheduled during his or her stay.

Multiple rounds are encouraged, not only because the rental-club program offers a chance to experiment with exclusive, hard-to-find equipment, but also because Deiro and Sean Cracraft, Royal Blue’s director of golf, move the course’s one set of tees forward, back, and also laterally—sometimes a little, sometimes a lot. That means the course plays noticeably—and in some cases drastically—different from one day to the next.

“We feel like this golf course is way too good for you to only see one little part of it,” says Deiro.

On most days, the Royal Blue tees play between 6,400 and 6,500 yards, but, as Deiro explains, the length of each hole and the placement of each tee box is merely a suggestion for what he and his team believe will offer golfers the most fun on that particular day. “If you think it’s too long or too short on any given hole,” he says, “play from wherever you want.

“We’re going to have a variety of some back tees, some middle tees, and some forward tees,” he continues, “but just know if you come back tomorrow, it will be a completely different golf course.”

That fact is quickly proven to me as I step on the first tee box to start my second round of my stay at the resort. The hole—a par-4 that plays slightly downhill to a green protected by two close bunkers on the right and a crescent-shaped pond 10 or 15 paces away from the putting surface on the left—measures only 358 yards on the scorecard. During my first round the day before, the tees were set close to that distance, which left me with only a 9-iron from the left side of the fairway after hitting a 3-wood off the tee. This time, the tees are set almost 50 yards farther back. After hitting—albeit poorly—a driver out to the right that is knocked down by the fronds of a palm tree just off the fairway, I am left with a semi-blind second shot about 200 yards from the green.

Many of the holes during my round, like the first one, play much different than they did during my previous round and require different strategies off the tee and on approach shots, oftentimes requiring far different club selections, too. It is no coincidence that on the days when some of the par-5s are unreachable in two shots, the pin placements are more challenging. “If I know a guy will be standing out there with a wedge,” says Cracraft, who typically sets the tee and hole locations each day, “I’m going to give him a more challenging wedge shot with those hole locations.”

The criteria for how drastically the tee locations are moved is influenced most by the list of tee-time reservations that day. Even if only one resort guest is returning to the course for another round, Deiro and Cracraft will make it a point to set up the course in a much different way than it was the days before. In fact, Cracraft has been known to relocate tees midday if a group of guests is scheduled to play twice on that day.

It may not be long before other courses back in the United States begin adopting a similar strategy. “We’ve had a lot of golf operators here that have come out and played,” says Deiro, “and they have said, ‘I like the idea. I don’t know that I’ll go to one set of tees, but you’ve shown me that I don’t need five sets of tees.’”

“When I move back to the States, which, eventually I will, and I build another golf course, this will definitely be one of the things that I take with me,” adds Cracraft. “If I was a member of a club and I didn’t know how the course was going to be set up each day, other than the total yardage was going to be comparable, to me that would be extremely interesting.”