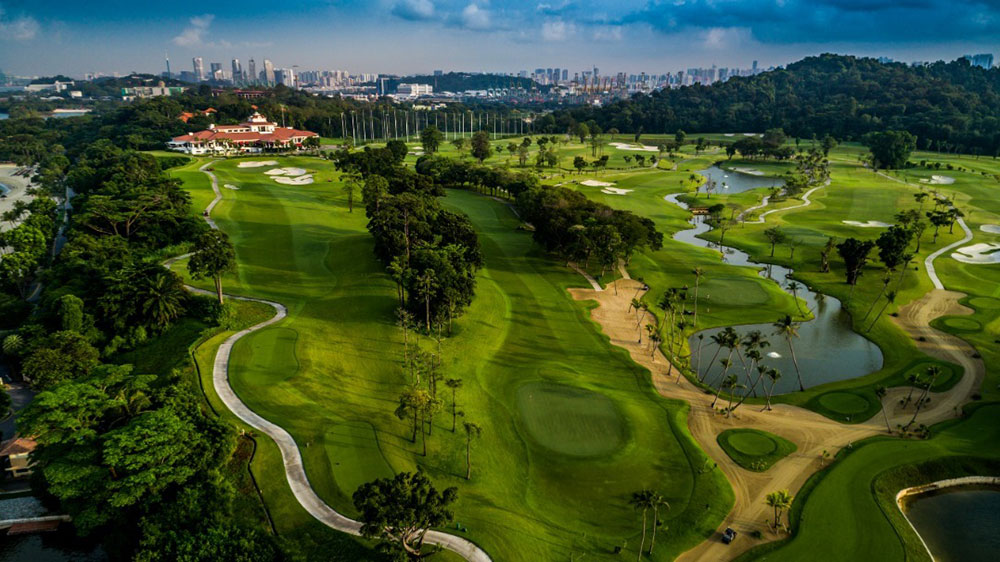 Andrew Johnston isn’t mincing words. “I want golf to lead on climate change,” says the general manager of Singapore’s Sentosa Golf Club. “Because if we don’t, it could be game over.”

Reports of golf’s environmental credentials aren’t usually positive. The sport has become an ecological punchbag, pilloried for the vast volumes of water and tons of chemicals it uses to keep courses in top condition, particularly in locations where grass doesn’t grow naturally. Deserts in the Middle East, for example.

But if Johnston, who is also Sentosa’s director of agronomy, is to be believed, golf could show the rest of the world how to go green. In fact, he says, it already is.

At the end of October, Sentosa Golf Club was named the world’s best golf club at the World Golf Awards. The gong took into account a number of factors. Hosting an unprecedented six televised tournaments in 14 months clearly helped, as did a focus on growing junior golf. The quality of the club’s two stunning golf courses, particularly Serapong, which is currently ranked at 79 in Golf Digest’s prestigious biannual list of the world’s best tracks, contributed, too. But what tipped it was Johnston’s environmental program. “No other club is doing what we’re doing,” he insists.

Some of what the club is doing under his leadership is familiar enough. Scrapping single-use plastics and bottled water on golf carts (previously, the club’s golfers had consumed 150,000 bottles of water a year—”that’s 22 Olympic swimming pools,” says Johnston.); using biodegradable plastic bags for dirty clothes; establishing bee colonies (they have four, with plans to increase to 40).

But the clincher was the new agronomy practices he’s introduced. In 2016, Johnston oversaw the redesign of Sentosa Golf Club’s second course, now called New Tanjong. Part of the redesign involved installing six reservoir-water features so the course would become self-irrigating. He’s also introduced biochar, a natural alternative to fungicides and chemical fertilizers that are applied to the courses once a week. “We’re making our plants and grasses healthier so we can reduce the amount of chemicals we use on the course,” he says.

His mood darkens when he remembers that a number of Singapore’s courses have either closed recently or are due to shut when government leases run out. Singapore’s reclaimed land can take a decade or two to bed in, and before it can be developed with high-rise buildings the land is sometimes used for recreation activities—such as golf. Raffles Country Club went in 2018 to make way for the Singapore to Kuala Lumpur high-speed rail project, and Johnston expects that the Marina Bay Golf Course, currently the island’s only public course, will soon follow. He’s confident the same fate won’t befall Sentosa, however.

“It’s sad,” he says. “None of us likes to see these courses close.” Golf in Singapore is already prohibitively expensive. The city-state’s population of 5.5 million now has fewer than 20 courses to choose from, and annual memberships can cost hundreds of thousands of Singaporean dollars. Annual packages for Sentosa’s 1,500 members start from the equivalent of $185,000.

Clearly, Johnston is not your average golf club GM. “People in my position are not normally agronomists, environmentalists and course designers,” he says. “Normally they’re just F&B guys.” As well as New Tanjong, Johnston re-sculpted Serapong 12 years ago, too. He began his career with Arnold Palmer Design Company before working with Gene Bates and former Ryder Cup player Fred Couples. He’s been involved in more than 100 projects around the world and is recognized as one of the leading course designers and voices in the industry today.

Sentosa Golf Club’s two courses will be familiar to fans of professional golf. The SMBC Singapore Open held in January on Serapong is one of the big draws on the Asian Tour and counts Sergio Garcia, Angel Cabrera and Adam Scott as past champions. A number of holes on the course, which was built largely on reclaimed land using sand dredged from Singapore’s harbor, run along the waterfront. The dramatic backdrop of Marina Bay’s skyscrapers and the hulking cranes of Singapore’s bustling port (currently the world’s leading maritime capital) is one of the most iconic sights in world golf. The LPGA Tour’s HSBC Women’s World Championship in February takes place on the New Tanjong and has the bigger purse of the two blue ribband events, offering its field a share of $1.5 million.

Environmental upgrades continue at Sentosa. Five electric charging bays have been installed, with more to come. “In five years’ time, we’re expecting 60 percent of Singapore’s cars to be electric,” Johnston says. A new ultra-efficient air conditioning system has just gone in, and they’re testing a food waste digester that turns noodles and burgers into a powder that can be used as fertilizer. “It might cost us around $400,000,” he says. “We get a grant if we go through with it, but that’s not the reason we’re doing it. It’s because it’s the right thing to do.”

Given his scientific mind and lifetime observing the environment, what’s his take on the long-term health of the planet? “Once we’re past the point of no return?” he asks. “I don’t know. Carbon emissions continue to rise in a way that’s unprecedented in human history. It doesn’t look good. But as I said, I want golf to be a leader in reversing climate change.”

Singapore is not a bad place to start, although the paradox here is that, as Johnston admits, the tropical climate gives him an advantage over say, Dubai. He estimates that 80 percent of the water he needs to keep his courses in championship condition comes from the atmosphere. Singapore is the world’s 13th wettest country, and half the year is monsoon season. According to government statistics, it rains 167 days a year. But so pioneering are his strategies that he’s now being called on to preach his vision at conferences all over the world.

While we’ve been talking, a wild electrical storm has rolled in off the South China Sea, signaling a course closure that has flooded the covered terrace where we’re sitting with golfers while they cower from the deluge. A wall of rain has engulfed the boats that litter the harbor and so cacophonous are the thunderclaps that they drown out our conversation when they come. “My reservoirs are low at the moment,” says Johnston, a broad grin spreading across his face. “So I hope it does this all afternoon.”

Sentosa island, or “The State of Fun” as it calls itself, is Singapore’s recreation capital and riddled with amusement parks, shopping malls and adrenalin experiences. Sentosa Golf Club’s courses are open to the public, although Serapong is closed for maintenance on Mondays. The club has no accommodation, so here are three hotels to base yourself in.

Opened at the beginning of December, The Barracks Hotel was once a British artillery outpost. It’s now been transformed into a boutique hotel inspired by the golden age of travel.

Capella hit the headlines in 2018 when it was hired out for the summit between President Trump and North Korea’s Kim Jong-un. The hotel is built around two colonial bungalows that date back to the 1880s.

The Shangri-La’s family-friendly Rasa Sentosa Resort and Spa is Singapore’s only beachfront hotel. Take a suite with your own private jacuzzi and views out over the South China Sea.