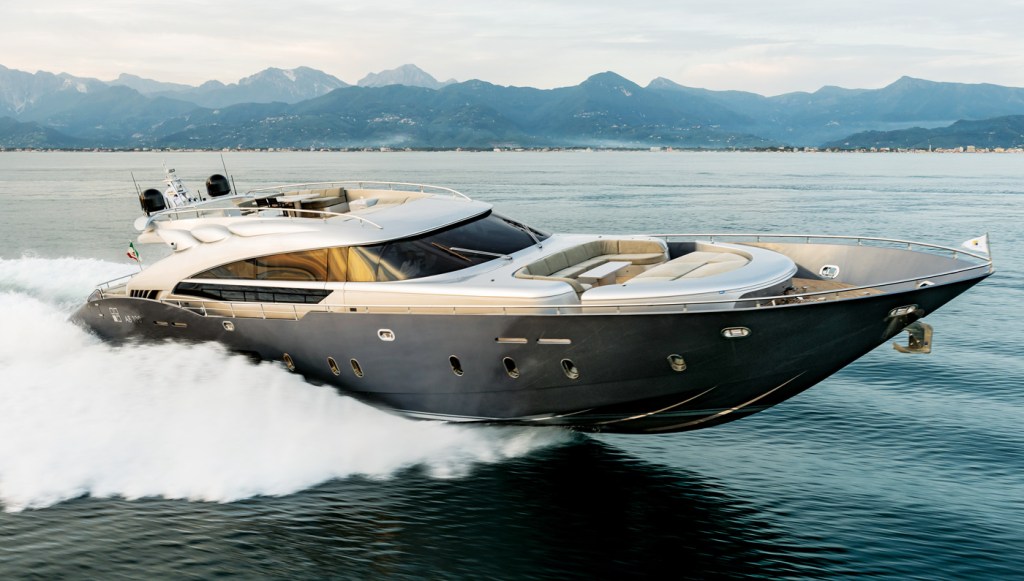 Spectre, the first launch in the Italian brand’s new model line, enables its owner to enjoy his leisure time at a hurried pace.

Commissioning a 100-foot yacht that reaches 62 mph sounds like a response to a midlife crisis. But the owner of the vessel, a new AB Yachts 100 named Spectre, had a perfectly logical reason for making the purchase: His previous yacht plodded along at only 25 mph, and “he appreciates getting between destinations fast,” says Rudolf Berglehner, who is the head of marketing and sales for AB Yachts’ parent company, Fipa Group. Berglehner concedes, though, that the AB 100 is “the ultimate toy for a big boy.”

AB Yachts, an Italian builder that has been in business since 1992, constructed the 100 with lightweight materials and equipped it with three 1,900 hp MAN engines, each of which is paired with an MJP water-jet. But the design doesn’t sacrifice comfort for speed. The living spaces include a spacious main-deck saloon, a full-beam master suite, and a tender garage at the stern that converts into a beach club. (abyachts.com)

The World’s Fastest Boat
When George Wood reached 92.8 mph in Miss America VII on the Detroit River in 1928, he established what is considered the first official world water speed record. A year later, his brother Gar used the same boat to set a new mark of 93.12 mph. By the mid-1950s, following the advent of jet engines and hydroplanes, the record had climbed past 200 mph. Then in 1977, Ken Warby, piloting Spirit of Australia—a craft he built in his backyard in Sydney—reached 288.60 mph. Warby used the resulting sponsorship deals to fund improvements to his boat, which was powered by a Westinghouse engine found in jet fighters and other aircraft. On October 8, 1978, on Australia’s Tumut River, he blew past the 300 mph barrier by achieving an average speed of 317.6 mph across two runs. (He briefly reached 345 mph.) His record still stands, and Spirit of Australia remains on display at the Australian National Maritime Museum (anmm.gov.au) in Sydney.

Twitter Is Finally Launching Its Edit Button in the U.S. — but Only for Paying Subscribers