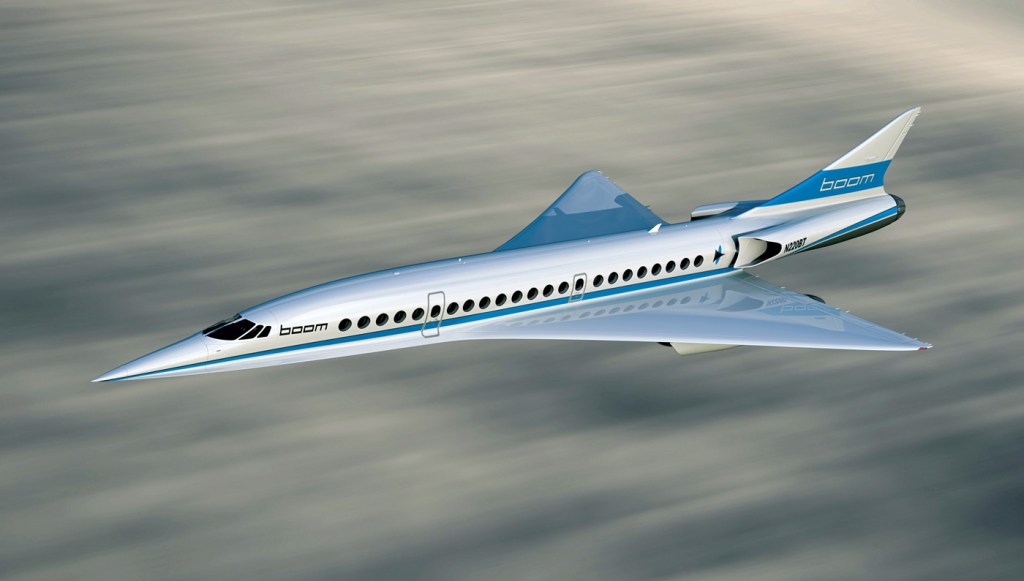 A Denver company is developing a passenger jet that will travel at 1,451 mph—more than 100 mph faster than the Concorde.

In November, Denver-based Boom Technology unveiled the XB-1, a supersonic demonstrator aircraft at one-third the scale of the airliner it’s developing. Nicknamed “Baby Boom,” the plane is scheduled to make its first flight and become the world’s fastest civil aircraft by the end of this year. The full-size airliner is expected to make its first flight in 2020 and enter service in the early part of that decade. When it does, according to the company, it will travel as fast as Mach 2.2, or 1,451 mph (over oceans and other areas where supersonic flight is not prohibited). That’s about 2.6 times as fast as many of today’s airliners.

The Boom airliner will carry 45 passengers, each of whom could pay a fare that’s about the same as the price of a business-class seat on a subsonic airliner. “The fuel economy on Concorde was so poor that the airlines had to charge $20,000 a ticket [round-trip from New York to London],” says Boom CEO Blake Scholl, who founded the company 3 years ago.

The Boom aircraft’s efficiency will come from its aerodynamic design, which is made possible by its carbon-fiber construction. “Concorde was made of aluminum, and with aluminum you can’t do more than have a tube with wings,” says Scholl. “Carbon fiber can be molded in the shape you want,” he continues, noting that Boom’s design is tapered toward the back. “Carbon fiber also holds up better than aluminum to high temperatures. The temperature of the airframe rises as the speed increases, so that’s another reason our aircraft will be able to travel at Mach 2.2 versus Concorde’s Mach 2.0.”

Scholl says the aircraft will cost $200 million in 2016 dollars. (boomsupersonic.com)

The First Super-sonic Airliner
The Concorde was the last supersonic airliner to fly, taking off and touching down for the final time in 2003, but it wasn’t the first. That distinction belongs to the Soviet-built Tupolev Tu-144. It made its inaugural flight on New Year’s Eve 1968, 2 months before the Concorde took to the air.

The similarities in the two aircraft’s appearance—the delta wings and needle nose—have persistently prompted accusations that the Tu-144’s development, which began after the British and French started work on the Concorde, benefited from Soviet espionage. However, the planes’ design and engineering were not identical. With a seating capacity of 126, the Tu-144 carried 26 more passengers; and more significantly, it had a faster cruising speed: Mach 2.3 versus the Concorde’s Mach 2.0. But the Tu-144’s range was not as great as the Concorde’s, and neither was its longevity. It didn’t go into service until 1977—nearly 2 years after the Concorde began carrying passengers across the Atlantic—and it served as a passenger transport for only 6 months and 55 flights before it was grounded following a test-run crash in May 1978. The Tu-144 remained in service for another 5 years, but only as a cargo transport.