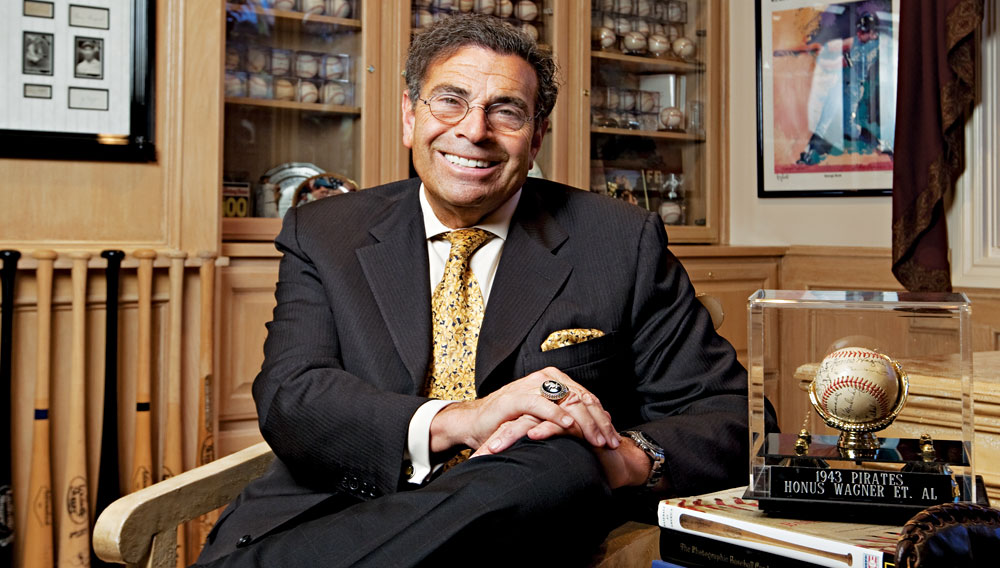 Dennis played in the minor leagues from 1966 to 1971 for the Boston Red Sox and New York Mets organizations, but his real success in the sports world came as a steward for such stars as Jose Canseco, Bobby Bonilla, and Barry Bonds, all of whom he still counts as friends. A cofounder of the Professional Baseball Scouts Foundation, Gilbert currently serves as the senior partner at an insurance and estate-planning firm and as an advisor to Chicago White Sox owner Jerry Reinsdorf. Thanks to his personal and professional attachments to baseball, he has a direct connection to nearly every piece in his collection—from former client Mike Piazza’s autographed all-star jersey to the glove, bat, and ball signed by Gilbert’s rookie-year hitting coach, Ted Williams. Gilbert has no interest in speculating on the worth of any of his memorabilia; that, he claims, is for the kind of collector who keeps a Sharpie in his breast pocket. “That’s not me,” he says. “Most of my pieces were gifts. I’ve never asked for an autograph in my life.” Well, maybe one time: Gilbert’s prized possession is a collection he commissioned of autographs from each of the 100 greatest baseball players of the 20th century, a one-of-a-kind assortment that, like everything else at Cooperstown West, evolved purely out of a love for the game. —Lisa Sweetingham

Sporting News came out with a story about the 100 greatest baseball players of the 20th century, voted on by the sportscasters and sportswriters of America. Maybe a third of the players were still alive. I commissioned a guy named Drew Donen and gave him an awful lot of money to find me an autograph from every single one of the 100—and that includes Negro League players, by the way. Some are autographs, some are signed baseball cards, some are signed checks. It took a couple years, but we got every single one of them—except for “Shoeless Joe” Jackson. He didn’t know how to write. His wife would sign his name for him, so that’s what we got. It’s a one-of-a-kind piece that nobody else has, and it’s one of the only things I’ve ever paid for.

Name of the Game

I know baseball and I know the players, but I don’t know values. That’s not my thing. So for me, when it comes to collecting, it’s about uniqueness. See this Bret Saberhagen jersey here? This was worn in the 1985 World Series by the guy who was the most valuable player. The whole team signed it, and it’s the jersey Saberhagen wore when they won the last game of the World Series. It’s a one-of-a-kind jersey from a one-of-a-kind moment. That’s unique. Some people, they buy stuff or they have things made, but it’s all contrived—it has no warmth. My collection? There are stories behind most of our pieces. I mean, look at this Barry Bonds jersey. It’s inscribed, “To Dennis and his family.” A true collector might not want his name on this jersey because it loses value when they want to sell it. But nothing here is for sale.

Most of what I own are gifts from players, scouts, and baseball executives. I also inherited a lot from my grandfather. He was the maître d’ at the Café Chambord in New York, a place where all the old ballplayers would come in when they were playing the Yankees or Giants. He left me a book filled with autographs, like that Cy Young signature and others. I also have a very special framed piece in the bar room, with Joe DiMaggio’s Yankees jersey, a home plate, a bat, and a photo of me and DiMaggio—all of it signed—taken the year before he passed. Joe and I hung out the whole day. He kept saying, “If I’d have had you as an agent, I wouldn’t have to be signing things today.”

I’ve seen tons of people’s collections, and I’ve never seen a Honus Wagner signed ball like mine. He signed it on the sweet spot, in 1943, when he was coaching the Pittsburgh Pirates. The whole team signed it. This ball was donated to the Professional Baseball Scouts Foundation for a charity auction. Jerry Reinsdorf outbid everybody and gave it to me as a present. I have no idea how much it’s worth. I mean, how many baseballs did Honus Wagner sign? That baseball card that went for some stupid number? That’s just a card.

Derek Jeter has no real value. I mean, OK, he’s got value, but you can go to the store and get as many Jeters as you want. That one ball? It might be worth a bit more. But if it were me who’d caught it, I’d have probably given it back, too, and I’d have been a hero.

It has to be fun and serious. I started collecting baseball cards in grammar school, and it was fun because I loved the game and loved reading about the players. But I was also very serious about getting every card. That’s how it started for me. No matter what you’re collecting, you have to have a passion for it; it has to be something you truly love.