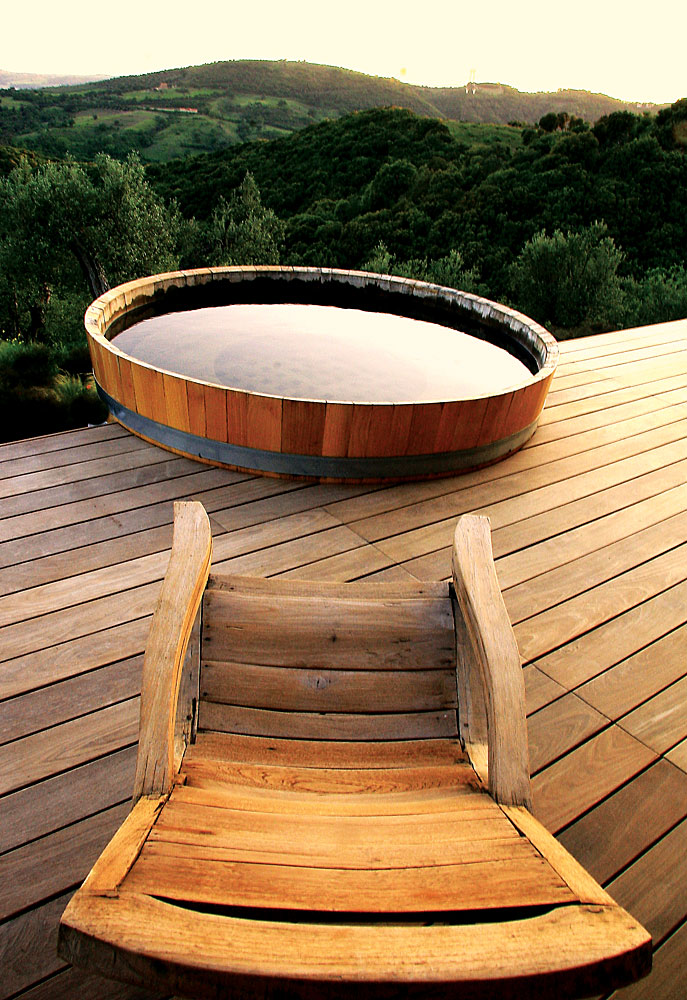 An oversize hot tub positioned at the periphery of a steep ravine discreetly suggests that there is more to Castello di Vicarello than just the vineyards. Owners Aurora and Carlo Baccheschi Berti had the tub custom-made to resemble the oak barrels they use to produce their two wines: a savory combination of Sangiovese and Merlot called Terra di Vico, and an organic blend of Cabernet Franc, Cabernet Sauvignon, and Petit Verdot named after the estate. The opportunity to sample both varietals while soaking in the hot tub is one among many therapeutic pleasures offered at Vicarello, as the 12th-century-fortress–turned–hotel in Italy’s Tuscan countryside is more commonly known.

“This is not a typical spa experience,” says Carlo, “so you won’t find any wheat germ and sprouts and herbal tonics. This place is about wellness.” His definition of wellness would please even the most spa-phobic traveler. Here the pursuit of a healthy condition involves meals like crunchy, coated roast pork (obtained from the Baccheschi Bertis’ 780-acre hunting estate nearby) or Florentine steaks with homegrown vegetables prepared by Aurora and her kitchen staff of two. It also includes daily massages, trips to the sauna and Turkish bath, and, of course, hot-tub soaks under the open sky.

“It’s a spa for men,” beams Carlo, noting the masculine bent of the hotel’s facility, which caters to both male and female guests. The hotel’s accommodations include two rooms, four suites, and a freestanding one-bedroom villa (rates range from $540 to $1,717 per night). The property also has two outdoor swimming pools.

The spa, which opened this past spring, is separated from the guest rooms by a grove of olive trees and a field of fragrant rosemary. Upon reaching the ipe-wood structure, guests are greeted by therapist Lissy Thomas, whom Aurora met two years ago while visiting an Ayurvedic center in Kerala, India. Thomas offers Ayurvedic treatments to soothe everything from muscle aches to arthritis, headaches, sinus issues, and even memory problems.

Thomas begins my one-hour massage by reciting a short Indian prayer as she anoints my forehead and shoulders with warm, scented oil. Afterward, she slathers an herbal-infused cream from India over my body, working her hands into my tired muscles until they are as limp as strands of tagliatelle. Finally, she wraps me in a sheer linen towel and directs me to the next room, where I can linger and meditate in silence on a yoga mat.

Though I feel at ease, my meditations seem ineffective; my mind wanders back to the stories that Aurora and Carlo tell about how they found Vicarello in the late 1970s and began restoring it in the 1980s. The couple also enjoys recalling the tale of how, in 1991, when Aurora was pregnant with their second child, a midwife claiming to have psychic powers told them that in a previous life they had perished in a fire on the property. The Baccheschi Bertis thought the woman insane until they discovered that, early in the 14th century, the German emperor Arrigo VII set the fortress and its inhabitants ablaze in his attempt to unify the Italian peninsula with the Holy Roman Empire. The midwife’s grimly fascinating tale is worthy of Boccaccio’s Decameron, yet its details are questionable—particularly the assertion that the Baccheschi Bertis are the reincarnations of two of Arrigo’s soldiers who were meant to live at Vicarello forever.

Contemplating my pleasant surroundings, I must admit that the idea of eternal residence here is appealing, if impractical. And while reincarnation is not among the therapies listed on the spa menu, my treatment has left me feeling like a new man as I linger in the oak-barrel hot tub over a glass of estate-made Cabernet.