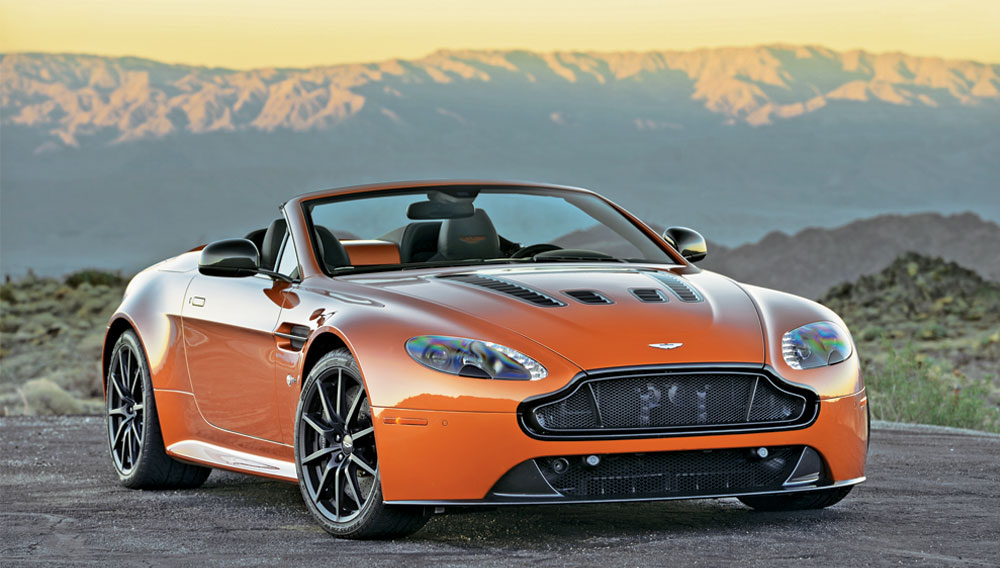 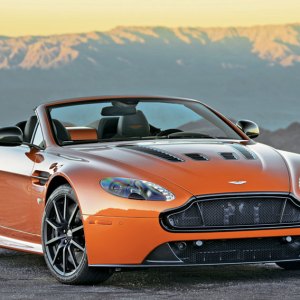 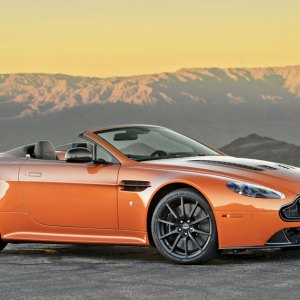 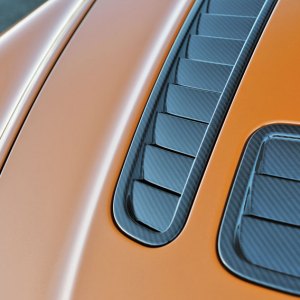 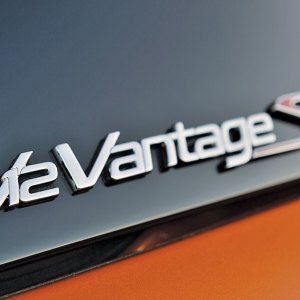 Aston Martin’s small and sporty V12 Vantage S Roadster has the potential to live a long and fast life.

The Ritz-Carlton in Rancho Mirage, Calif., sits atop a bluff in the Santa Rosa Mountains, surrounded by a bighorn sheep reserve and overlooking Palm Springs and the Coachella Valley. The setting is breathtaking and exclusive. It is also convenient to the Palms to Pines Highway, a two-lane route that wriggles upward through a gap in the mountains and admits travelers to Southern California’s lesser-known, semiarid interior valleys.

Earlier this fall, the Ritz-Carlton hosted Aston Martin’s preview of the V12 Vantage S Roadster, a breathtaking and exclusive new two-seater that joins the 2+2 Vanquish Volante and the DB9 Volante to give the marque a trio of V-12-powered convertibles. Drivers invited to the preview tested the Roadster on the Palms to Pine en route from the Ritz-Carlton to Borrego Springs, a remote desert village where there are no stoplights and no streetlights. Nighttime lighting of any kind is restricted because it would interfere with the view of the stars, which, along with golf courses and mild winter temperatures, draws travelers to the community.

The visitors’ bureau describes the pace in Borrego Springs as slow and uncomplicated. The Roadster is neither. It is a sophisticated machine that is Aston Martin’s fastest-ever convertible. It is on sale now for just under $200,000; a small batch will arrive at U.S. dealerships in time for Christmas, with the bulk to follow in January 2015.

Although the Roadster has a wheelbase of only 102.4 inches, it nevertheless accommodates the huge all-alloy engine; a driver and passenger whose feet rest inches from the engine; the mechanism for the power-operated, suede-lined fabric top; and the rear-mounted transmission that contributes to a 51/49 front-to-rear weight ratio, which helps balance the car’s 3,847-pound mass. A bonded-aluminum chassis supports the whole works. From pert nose to bobbed tail, the Roadster is 172.6 inches long—just 15 inches longer than the Mazda Miata.

The Roadster is equipped with a 7-speed automated manual transmission that debuted with the V12 Vantage S coupe in 2013. The transmission upgrade was among several refinements that Aston Martin made to the earlier Vantage models, which featured a 6-speed fully manual gearbox. The stout automanual unit, made by the Italian supplier Oerlikon Graziano, uses hydraulic actuation to mesh the gears. There are two shift paddles on the steering wheel, and there is no clutch pedal on the floor. When the car is loafing along in the normal driving mode or zipping ahead in sport mode, the computer operates the clutch, giving the driver the choice to use the paddles or allow the computer to shift gears. When the car is in sport mode, the driver can choose any gear and hold it through the mighty 6-liter V-12’s peak torque output of 457 ft lbs at 5,750 rpm and 565 hp at a screaming 6,750 rpm.

On the drive through the desert, the transmission worked unobtrusively, supporting Aston Martin’s claim of “precise and swift gear changes.” It executed even block shifts flawlessly, changing rapidly from fifth to second when the car was braking for a tight bend. The transmission and the naturally aspirated engine enable the Roadster to accelerate from zero to 62 mph in 3.9 seconds. Top speed is rated at 201 mph. Because the engine’s power band is so broad—more than 80 percent of the torque is available off idle—drivers on public roads will seldom need to execute block downshifts or push to the upper limit of the 8,000 rpm tachometer.

Thanks in part to the four hollow camshafts, the engine operated smoothly and willingly on a relaxed drive where the road climbed over a boulder-strewn divide extending from the foothills of the Santa Rosas. When the road dipped and outcrops closed in on both sides, the car was set to sport mode, which makes the suspension firmer, sharpens the driveline responses, and increases the volume of the tailpipe’s battle song. In this driving mode, the accelerator is so delicately weighted that the slightest pressure variation can raise or reduce the engine speed by 250 rpm. The track setting engages a plethora of electronically governed chassis controls and fosters a fierceness not found in mass-market automobiles.

After two more junctions, the route made a thrilling, cliffside descent into Borrego Springs, which is located within the immense Anza-Borrego Desert State Park and bears the Spanish name for the bighorns that inhabit the area. The Roadster’s mighty braking system, which includes carbon-ceramic discs and 6-piston calipers, provided a sense of security during this part of the drive. The exactness of the steering enabled the car to make a precise line through each bend in the road, until a flick of the steering wheel and a tap on the brake pedal stopped it at a point that afforded a panoramic view of the great arid bowl below.

In Borrego Springs, Aston Martin arranged lunch at La Casa del Zorro, a charming resort that was owned in the 1960s by the newspaper publisher James Copley. It first hosted guests in the 1930s and reopened last year following a renovation. Parked on the resort’s shaded grounds, the Roadster displayed a fascia that eschews the prevailing gaucheries of automotive design, in particular the gaping front intakes and other overly obvious attempts to manage airflow. When the car is viewed in profile, especially with the top down, the crisp character line and deep sill dramatize the excellent overall proportions, while the tail rounds off with assured grace. The spoiler suggests the insouciance that only a 200 mph supercar can rightly affect.

No two examples of the Roadster need be alike. Aston Martin offers dazzling combinations of bold exterior and interior colors. An extrovert could select a Madagascar Orange outside with Spectral Blue upholstery, although the appeal of a more conservative Morning Frost White body and Kestrel Tan leather would surely last longer. The soft top can be the same color as the body or it can serve as a stately contrast. Red carbon-fiber louvers instead of the standard black ones will change the signature hood vents from menacing to merry. The grille can be black or silver mesh, and forged-alloy 10-spoke wheels are also an option.

On the return trip from Borrego Springs, the searing heat and harsh sunlight demanded that the top be raised, which is a touch-of-a-button operation that takes about 14 seconds. The air-conditioning refreshed the cabin as the car retraced the cliff-hugging path, snapping through the turns on its way to cresting the summit, about 3,500 feet above the village. The audio system, which includes tweeters that rise automatically from the corners of the dashboard, provided a soundtrack to the splendid view from the summit.

Upon returning to the Ritz-Carlton, the Roadster went off with the valet and tea was served inside the hotel. Decades hence, this scene could be repeated with this very car. It should age well because of the skill with which it was assembled, and because it possesses a beauty that seems as though it will be timeless. The Roadster will be enjoyed now by driving enthusiasts and could, like many of the classic Aston Martin convertibles, be treasured for generations by car connoisseurs.