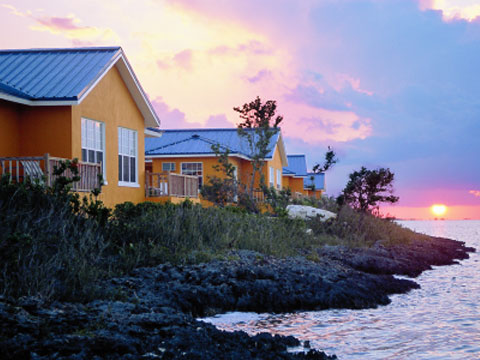 There are two kinds of fly-fishing, a saltwater guide once told me: bonefishing and everything else. The torpedo-shaped speedsters known as bonefish are renowned for reel-searing runs that can leave the uninitiated breathless. So impressive is their initial burst of power that bones have developed a following of adrenaline junkies who venture as far as Christmas Island and the Seychelles to pursue the fish. However, some of the most prolific bonefishing is found just two short plane flights from Miami, off of Andros Island, the largest landing in the Bahamas archipelago.

The island’s eastern shore has always been its most popular fishing spot—so popular, in fact, that many of the bonefish have migrated to the less frequently visited flats along the remote western coast and in the water-ways, or bights, that divide the island. Situated on the grounds of a former coconut plantation on the south shore of the Middle Bight, the Mangrove Cay Club offers ready access to these waters and their bounty of bonefish, which average 4 to 5 pounds and occasionally weigh in at 10 pounds or more.

The club, which is a five-minute drive from the Moxey Town airport and its twice-daily flights from Nassau, accommodates guests in eight spacious, air-conditioned duplex villas, each of which includes a screened veranda overlooking the water.

The eight skiffs in the club’s fleet are powered by 90-hp engines that can quickly transport you through the Middle Bight to the bonefish flats on the west side of the island. The skiffs’ friendly, well-trained pilots join guests each morning to go over that day’s fishing plans. Following our initial meeting, our guide, a 22-year-old Bahamian named Charad Williams, steers our boat to one of his favorite bonefish flats, a football field–size sandbox covered with about 18 inches of water. It is a bonefish playground, and I am ready for a game of hide-and-seek.

Williams slowly poles our skiff along as he perches on an elevated platform and peers eaglelike into the water below. The ever-present wind has died down, providing ideal casting conditions. The Bahamas’ best fishing months are April through June and October through December, but some of the largest fish are caught in February, when the winds areat their worst. As if on cue, a pair of bones—perhaps 5-pounders—nose their way toward us. I shoot a 60-foot cast to the fish and drop my fly 2 feet ahead of them. “Good cast, mon . . . Let ’em come,” whispers Williams.

The fish ease ever closer to the fly, stirring up a cloud of sand as they till the bottom. “Strip your line, mon . . . Stop . . . Strip . . . Stop . . . Fish on!” The bone darts across the flat in an instant, taking nearly all of my line with it. When it appears as though the fish is going to outrun its tether, it turns and zips back toward the boat. I scramble to keep tension on the hook as I retrieve most of the line before the fish repeats the run. After three bursts across the flat, it surrenders to Williams, who leans over the boat to unhook the fish and revive it before returning it to the turquoise water.

The experience is repeated a half-dozen times before we return to the club’s main lodge, where a group of five husband-and-wife angling tandems are already on the covered veranda sharing cocktails and fish tales. Indeed, there is bonefishing and everything else, and there is Mangrove Cay and everywhere else.