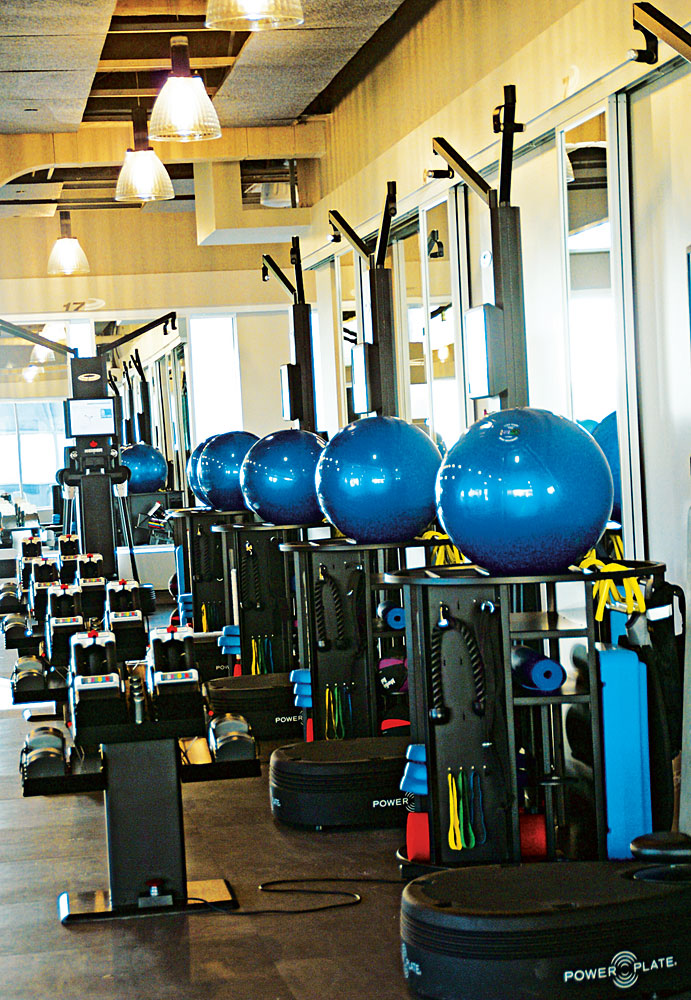 On opening day at Core Performance Center, a new health club in Santa Monica, Calif., trainer Sarah Cahill apologized for the awkward pace she had asked me to maintain during an eight-minute treadmill test designed to measure cardiovascular fitness. “Tomorrow we’re moving forward with new protocol,” Cahill assured me. “We’ll calculate your exact pace beforehand so we can avoid this step altogether.” I nodded but was unable to reply verbally—the trainer had also apologized while strapping a gas mask–looking apparatus around my head to measure my breathing.

Cahill performed similar tests on NFL players and Olympians while working in Tempe, Ariz., at the Athletes’ Performance Institute, an elite training facility. In 2008, API founder Mark Verstegen launched the Core Performance Center to offer the institute’s professional-level programs to amateurs. “I joined Core primarily because of Mark. He is the best in his field,” says Bill Allard, Core’s CEO. Allard, the former CEO and chairman of Marquis Jet, says that Core attracts the same types of clients he worked with at the private-aviation company. “Our members are what we call the ‘achiever set,’ ” he says. “No matter what they’re doing, their end goal is the same: They want to perform at the highest level.”

John Sitaras, a former bodybuilder and the founder of Sitaras Fitness, works with a similar customer base at his facility in Manhattan. “My clients are what I call ‘triple type A’ personalities,” says Sitaras, who reviews applications and invites potential members in for interviews. If accepted to the gym, which opened in 2006, Sitaras’ clients pay a $2,500 initiation fee and $12,000 in annual dues.

Sitaras tracks the progress of his 120 members by hand and uses physical therapy and bodybuilding techniques to prevent injuries and accommodate specific requests. “Recently, males have wanted a little bit rounder shoulders,” he says. “I have them working their deltoids—their medial, anterior, and posterior muscles—all separately so each muscle will have exactly the same strength and size.”

When his clients are traveling, Sitaras sends workout regimens to their mobile phones. Allard and his team, meanwhile, incorporate electronic devices into routines at the Core Performance Center. The company’s CPro system, which includes LCD interfaces mounted to weight machines, can process information about a client instantly and prescribe an appropriate workout. “You’re being trained by technology, but we don’t play up that part too much,” says Allard. “The technology is really just the delivery mechanism.” Or, as Cahill calls it, “an assistant coach.”

After you log into the CPro system, the screen prompts you to answer a series of questions about your energy level, soreness, and other factors that might affect your workout. The system then dictates your routine for the day and plays a video to demonstrate how you should perform each exercise. A Core specialist guides you through the hour-long session, which costs about $60. (The company does not charge dues.)

Cahill coached me through the treadmill portion of my workout, allowing me to push through a challenging interval. Before arriving at Core, I had taken a 10-minute online personality test designed to give trainers insight into how I like to be coached. Cahill studied my profile and determined that, as a competitive person, I would prefer to work through challenging situations without much assistance.

Allard, who is based in Boston—where Core Performance plans to open a fitness center this year—also displays a competitive streak when discussing his CPro training. “I used to be a guy who would run five miles in the morning, and never lifted that much,” he says. “At 48 years old, I’m in the best shape of my life. I played on a basketball team with my son and can beat my kids when we run road races.”