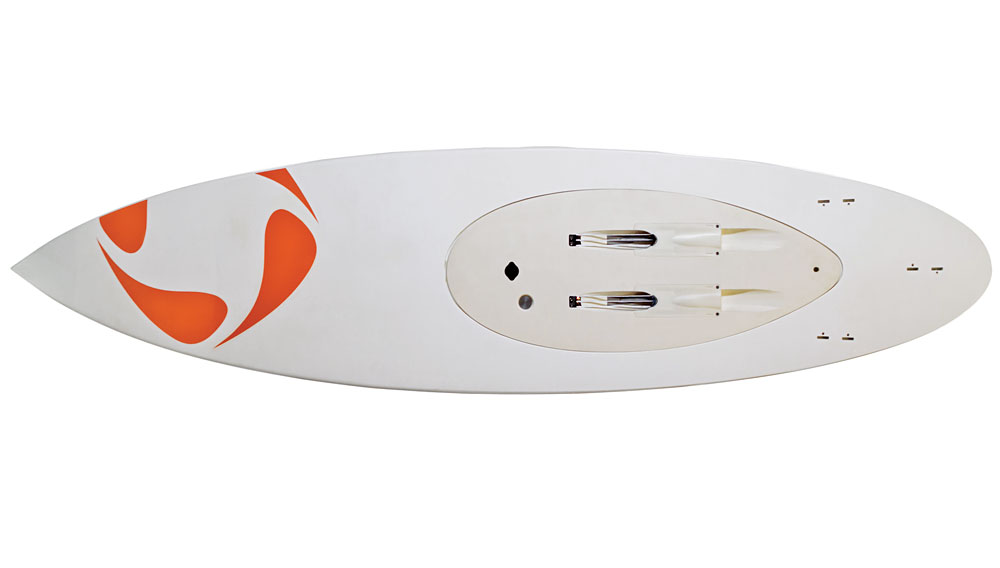 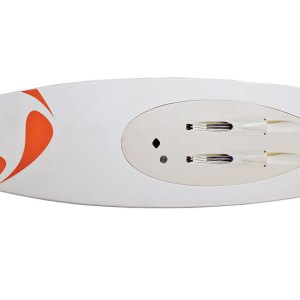 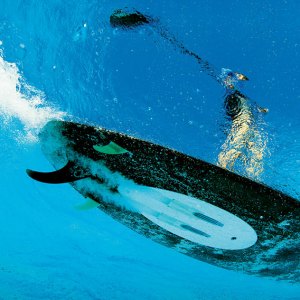 Southern California native Mike Railey has been an avid surfer most of his life. But about a decade ago, the 49-year-old amateur inventor grew tired of spending his time in the water waiting for waves, rather than riding them. His remedy—an inboard electric surfboard motor he built in his garage using hobby-shop motors, water bottles, and his wife’s Tupperware—is now poised to change the sport of surfing.

Though Railey’s initial prototype fell flat (“It only lasted for 20 or 30 seconds,” he recalls), he continued tinkering with various designs. This past June, through his Southern California company WaveJet, he began delivering his inaugural line of electric surfboards.

Railey’s patented design uses dual impellers similar to those of a personal watercraft to draw water from beneath the surfboard and shoot it backward, thus creating forward thrust. “The forward propulsion moves you forward,” says Railey, “but it also provides suction to help stabilize you in the water, making surfing easier for beginners.”

Beginners can test the waters at the TradeWinds Island Grand Resort in St. Pete Beach, Fla., where the first WaveJet Surf School launched in April. Though Florida’s Gulf Coast has few waves, electric boards are helping students stand up and ride the ripples as a casual introduction to the sport.

WaveJet is also attracting the attention of experts in Cal­ifornia and Hawaii, where big-wave surfers are often towed into breaks by personal watercraft. The company’s Team WaveJet sponsors big-wave legends Garrett McNamara, Cory Lopez, and Steve Walden, who can now ride 20-foot-plus waves without a tow. Walden, known as the “Father of the Modern Longboard,” calls WaveJet “the biggest advance in surfing technology since the fin.”

WaveJet sculpts and sells its surfboards (from $4,395 for a shortboard) with a space carved out of the underside for the engine system. The system includes a rechargeable-battery-powered pod and a wireless ignition remote that is worn on the wrist; the remote shuts off the pod’s motor when the board gets beyond the 12-foot range. (Extra power pods are sold separately for $2,500.) WaveJet offers two power configurations for the elliptical pod, which is 3 inches thick and nearly 3 feet long and weighs 16 pounds. On a single charge, one power option delivers 20 pounds of thrust for 40 minutes of use; the other provides 14 pounds for 60 minutes.

WaveJet’s engine options can propel a 200-pound surfer to speeds up to 7 mph, without the aid of a wave. The adaptable pod design means surfers can use the propulsion system with multiple boards—from body boards to stand-up paddleboards—to add a new element to each of their endeavors.

“I couldn’t consider going back to a non-powered board,” Railey says. “Instead of bobbing around and waiting, I’m on my board riding waves back and forth and going out every day. It’s simply a better way to surf.”