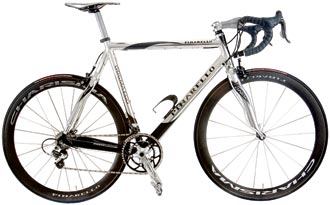 While veneration is duly accorded to Ferrari and Lamborghini for their iconic, candy-colored beasts, another Italian marque can claim a similar head-turning, race-winning distinction for its vehicles. The machines of Pinarello, however, race on two wheels and are powered not by 12-cylinder engines but by healthy legs and lungs.

At its factory in Treviso in northeastern Italy, Pinarello designs and builds some of the world’s most sought-after bicycles for professional racers as well as weekend riders. The Dogma Ego, the company’s new flagship, rides to unseen heights of élan, performance, and exclusivity. The $16,250 bicycle, of which only 199 will be constructed, is a refined version of the Dogma, Pinarello’s professional-class model, which sells for approximately $9,000 less than the new bike.

The Dogma Ego’s signature characteristic is its lustrous finish, a proprietary coating that is applied in five layers. Unlike standard finishes that can be oven-dried, the Dogma Ego’s coatings must be air-dried, which is why it takes Pinarello builders two full days to complete the painting process. The finish is so startlingly reflective that a rider can look down at the tubes and see his own visage—ergo the Ego moniker. Brendan Quirk, owner of Competitive Cyclist in Little Rock, Ark., was one of the first dealers to offer the Dogma Ego. “The person who buys this bike is a huge Pinarello fan. This won’t be someone’s first Pinarello, unless they have a fixation they’ve never really indulged,” Quirk says.

In the late 1930s, 15-year-old Giovanni Pinarello began building bicycles in a factory in Paglianti. He soon launched a racing career that ended in 1952 when he was asked by his team’s sponsor, Botecchia, to relinquish his place in the heralded Giro d’Italia road race to an up-and-coming young rider. Buoyed by a 100,000-lira bonus from Botecchia, Pinarello opened a bicycle shop in Treviso, which evolved into the source for bikes ridden to victories in the Giro, the Vuelta di España, and the Tour de France.

Beneath its otherworldly coating, the Dogma Ego has the only magnesium frame on the planet. The metal provides the frame with unprecedented shock absorption and weight savings; at 16 pounds, the Ego’s frame is 34 percent lighter than that of a similar-size aluminum bicycle. Most important, the frame’s rigidity prevents it from absorbing as much energy as its steel, carbon, and titanium counterparts do. “It’s got excellent stiffness for racing or accelerating up short, steep hills,” says Quirk. “It’s got a snap to it. It really gets up and goes.”