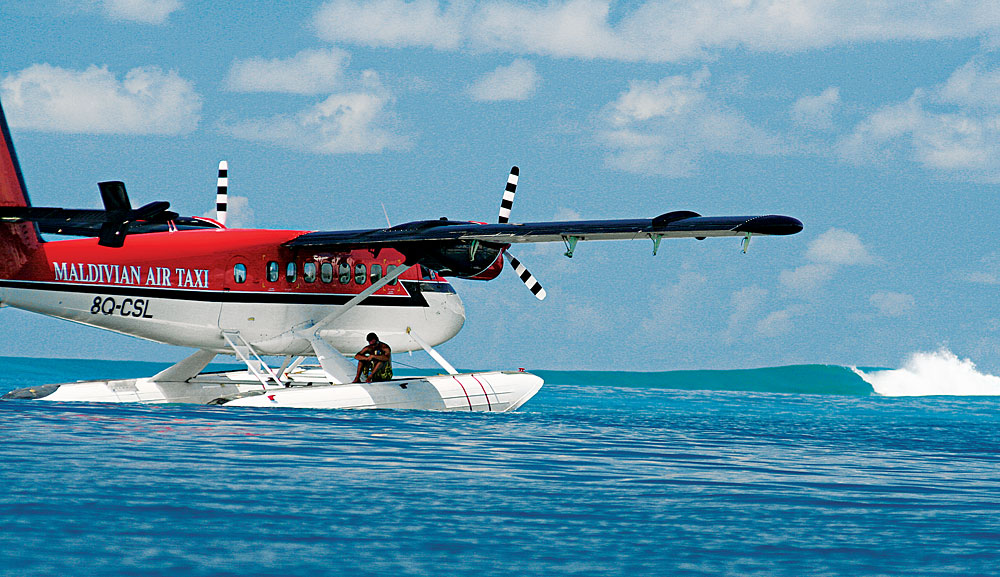 When you know where to look, the intricate maze of reefs and atolls in the Maldives—a nation of 1,190 low-lying islands off the southwest coast of India—can reveal what every surfer is in search of: the perfect wave. Today, however, Jack Chisholm will settle for any waves at all. Chisholm, a guide with Australian surfing outfitter Tropicsurf, has been monitoring a low-pressure system traveling northeast from Madagascar for the past few days. The forecast predicted waves for this morning, but by 10 am only the tiniest swells were lapping around Naladhu, a 19-villa island resort where Tropicsurf recently opened a surf school. Now, one hour later, Chisholm is scanning the seascape from a plane that carries me and three other Tropicsurf students. “On a February day like this, we’re outside of the Maldives’ normal surf season,” he shouts over the twin-engine din. “But with the plane, we can keep flying until we spot the swells.”

Tropicsurf’s team of surfing instructors has been cruising the Indian Ocean in search of the finest lefts, rights, peaks, and tubes for the past decade. The company offers trips aboard a 120-foot TS Handy Cruise boat, as well as a catamaran operated by the two Four Seasons resorts in the Maldives. Last year, Tropicsurf added a new dimension to its surfing safaris by forming a partnership with Maldivian Air Taxi, one of the largest seaplane operators in the world, to lead daytrips in De Havilland DH6 Twin Otter aircraft. The seaplane tours, which cost $2,700 per flight hour for as many as 10 people, can take clients to any of more than 50 isolated surf breaks that Tropicsurf’s instructors have discovered throughout the islands.

I have been training for this day since Chisholm coaxed me onto a surfboard two years ago at the Four Seasons Resort Maldives at Kuda Huraa, in North Male Atoll, where Tropicsurf operates another of its three schools in the Maldives. Like a baby learning to walk, I wobbled before first standing on a long board. But after several return visits to Kuda Huraa, I eventually worked up to surfing Sultans, Jails, and Honky’s, three of the nine breaks that are accessible by speedboat from the resort.

Aboard the seaplane, we fly high above one of Chisholm’s favorite breaks, and my anticipation soars. However, even I can see that the surface below is flat, with no indication of a rising swell. Chisholm directs the Maldivian pilot to change course, and we head south toward Gaafu Dhaalu Atoll. There, at the sight of a perfectly peeling right, the pilot swoops down and anchors the plane in a deepwater channel near the break.

Wearing rash guards and a slather of sunscreen, we paddle out to glassy, powerful waves that curl as high as 5 feet overhead. We are the only surfers for some 100 miles in any direction, and yet, after a brief but invigorating session, we board the plane in search of more surf. Over the next five hours, we fly to three more secret breaks, where the waves, if not perfect, certainly add to a perfect day.