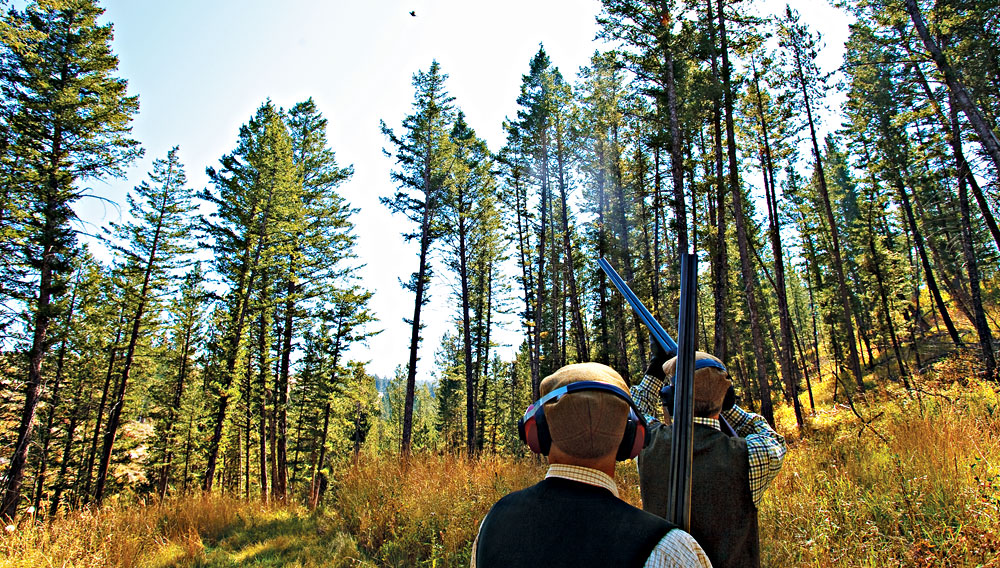 My lesson with Lars Magnusson seems to be paying off. The 36-year-old founder of Wyoming-based driven-shooting outfitter Blixt & Company has just walked me through the weight-forward, upright-stance, gun-to-cheek position that proper clay and wing shooting demands. Now, just 15 minutes later, I shatter the first four black clay disks that come into my range. But I have not come to Lazy Triple Creek in eastern Idaho to blast flying saucers. I am here, in the heart of the American West, to participate in a traditional English driven pheasant and partridge shoot.

The 2,200-acre Lazy Triple Creek—where fields of barley, corn, and sunflowers are flanked by sage-covered canyons—is an unlikely location for a traditional English hunt. In fact, according to Magnusson, who has worked at prestigious shooting schools in England, Sweden, and New Jersey, his company is the only public U.S. operation to offer true driven shoots (though he says several outfitters throw birds out of towers or off hills and promote the experiences as driven shoots). By Magnusson’s definition, the true mark of driven shooting lies in the hands of the gamekeeper, who manages thousands of pheasants and partridges without the use of fences or pens. The gamekeeper drives, or herds, the birds over a gun line with the help of a team of beaters, who wield sticks and orange flags.

Blixt & Company, which holds the exclusive hunting rights at Lazy Triple Creek, has offered driven shoots on the property since 2009, running from September through mid-November (from $4,000 per day, per shooter). In addition to the gamekeeper and beaters, the eight shooters in a gun line are assisted by eight picker-uppers (handlers and dogs), eight loaders, and two game-cart operators, putting Lazy Triple Creek on a par—in manpower and experience—with traditional English shoots. Blixt & Com­pany’s American endeavor, however, offers something its counterparts across the pond do not: access. “You have to know someone to get on the best English shoots,” a fellow guest tells me. “You can’t buy your way in at any price.”

Guests stay at Lazy Triple Creek’s 10,000-square-foot hunting lodge, which was built from logs exchanged for pines felled on the property. Hunters retire to the lodge for gourmet meals—often featuring the local game—at the end of each day’s driven shoot.

My luck from the morning lesson with Magnusson carries over to this day’s shoot. Moments after the drive begins, I ease the trigger and watch my first pheasant tumble. Still, even though I look the part—dressed in traditional European shooting attire—I realize I am no marksman. The bird is one of approximately 9,000 that will fly over our gun lines during the day’s six drives, affording ample opportunities to hit my mark.