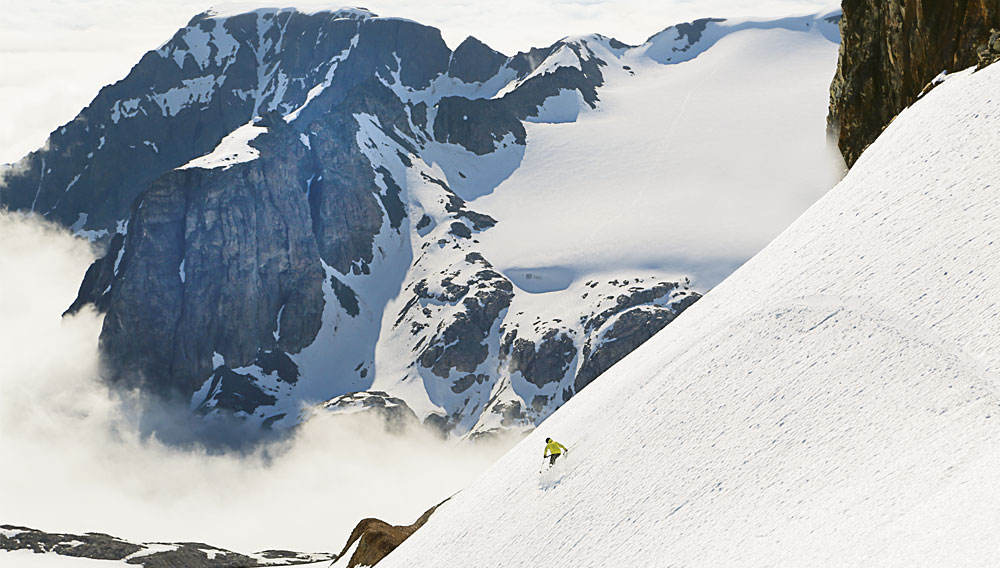 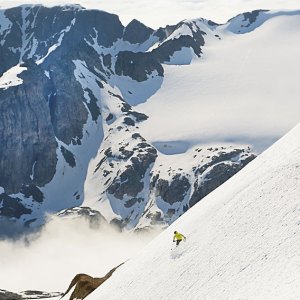 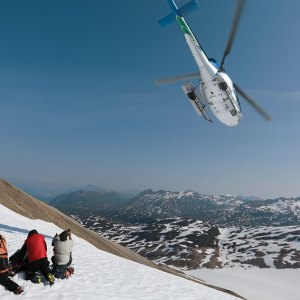 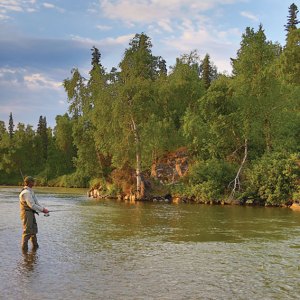 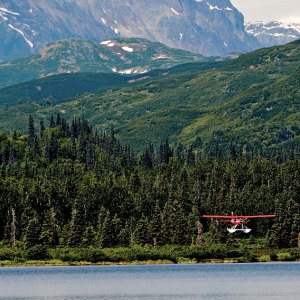 “I think we’re going to ski that,” I say jokingly to my neighbor in the Eurocopter AS350 AStar. To our left, an absurdly vertiginous slope drops like a waterfall, one of countless death-defying descents in Alaska’s Tordrillo Moun­tains. But our pilot appears to be climbing to the top of this particular behemoth, and when we settle down on the peak—on a tiny promontory barely large enough to accommodate a bicycle—I realize that we are going to ski it.

I have not been on skis for at least five years, and, to make matters worse, I have never heli-skied. Wavering between appropriately nervous and downright panicked, I express my concerns to Tommy Moe, the 1994 Olympic gold- and silver-medalist skier who is standing next to me at the cliff’s edge. “You can do this,” says Moe, who is a guide and co-owner of the nearby Tordrillo Mountain Lodge. “Just follow me.”

With that, Moe pushes off, using the soft corn snow to slide sideways the first 10 yards, taking some of the steepness out of play before a series of effortless turns. I follow quickly, if not gracefully, and a few minutes later, I reach the bottom of the vast bowl intact.

After an adrenaline-filled first morning on the slopes, I take some comfort in knowing I have a more tranquil alternative at Tordrillo Mountain Lodge. I am a participant in the lodge’s Cast and Carve program, in which guests split time as they choose between heli-skiing and fly-in fishing throughout the 1.2-million-acre Tordrillo range. The five-day program—which the lodge launched last year and offers each June ($9,000 per person)—balances the rush of heli-skiing with the relaxation of fly-fishing and spin-casting for chinook salmon (commonly weighing between 35 and 50 pounds), arctic char, and Dolly Varden and rainbow trout.

Weather conditions—and guests’ courage levels—determine the arc of each day. Visitors can ski in the morning and fish in the afternoon, or alternate between full days of skiing and fishing. The possibilities are endless, though the excitement remains consistent, as the thrill of flying along the Talachulitna River above moose and black bears proves equal to that of dropping down a precipitous peak on skis.

In addition to the heli-adventures, Tordrillo guests can spend time stand-up paddleboarding and riding personal watercraft on Judd Lake, target shooting with the lodge’s arsenal of firearms, and hiking through glacier-carved valleys. A wood-fired hot tub and sauna offer restorative measures at the lakeside lodge, as do a wine cellar and a restaurant that serves such local specialties as Kachemak Bay oysters, Alaska king crab, and vegetables from an on-site garden.

Of course, with Alaska’s 20-plus hours of daylight in June, a call to action can occur at any time. Indeed, after dinner one night, Moe’s partner, the heli-ski pioneer Mike Overcast, surprises our group with an announcement: We are going skiing.

Fifteen minutes later, just before 10 pm, the Eurocopter sets down on a snowy peak, the golden sun hovering in the distance. Diffused through wisps of cloud and fog, the light swirls into miniature rainbows as we follow Overcast’s line to the bottom of the slope, where the helicopter waits to spirit us to another run.