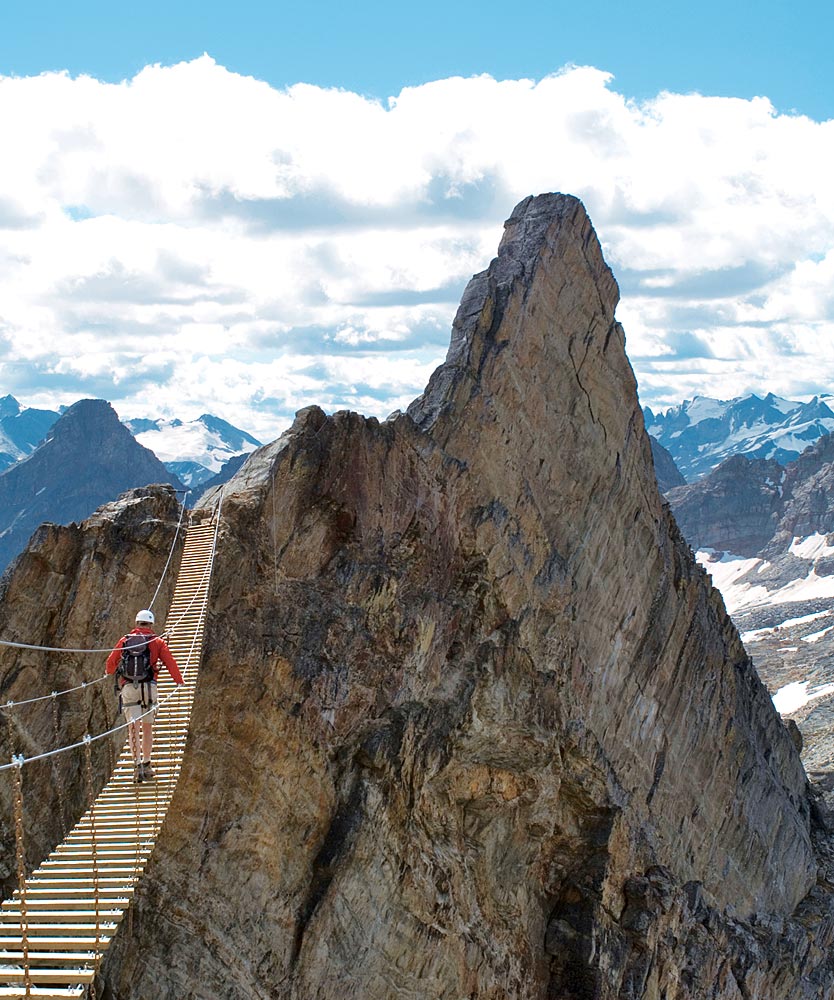 Our group of a dozen hikers huddles in a circle, shoulders hunched, hands clutching our backpack straps. Loose pebbles scatter on the ground around our feet, and Gore-Tex jackets flatten as the blades of our helicopter accelerate. At our guide Bernard’s signal, we rush into the chopper, which ascends quickly toward a W-shaped mountain formation known as the Waldorf Towers. The vehicle swoops between the vertical rock walls before landing on a small patch of dirt at the edge of a glacier.

To a backpacker who twice has trekked from Mexico to Canada, being dropped on a mountain by a helicopter seems like cheating. But my prejudice fades after I step from the chopper onto the massive sheet of ice. Here, in eastern British Columbia—among the world’s wildest, most beautiful, and least accessible peaks—a helicopter is the only practical way to reach the remote center.

Austrian hiker Hans Gmoser began guiding hikers in Canada in 1953, the same year that Sir Edmund Hillary and Tenzing Norgay made history by becoming the first people to summit Mount Everest. Gmoser later formed a tour company called Canadian Mountain Holidays, and by 1965 he was flying skiers via helicopter into the Bugaboo Mountains. When other operators followed, Gmoser pushed the British Columbian government to regulate prime hiking and skiing areas to prevent them from becoming overdeveloped. His company now maintains exclusive helicopter access to some of the region’s most spectacular terrain.

CMH celebrates its 50th anniversary this winter, but there is still history to be made among the many unclimbed peaks in the area. Of the company’s 12 heli-skiing lodges—which offer fine dining, wine cellars, massages, hot tubs, and other urbane amenities—five remain open during the summer to accommodate the 2,500 hikers who arrive each year to explore some 2,300 square miles of terrain.

CMH’s newest attraction is set within the 430-square-mile Bobbie Burns range. Opened this summer, the private Adventure Trails network consists of three hiking routes that feature high-ropes challenges, zip-line river crossings, rappels, and via ferrata systems, a concept CMH adopted from the Italian Alps, where cables fixed to rocks provide places to clip on carabiners. The network includes a hike to the summit of Mount Syphax, during which participants scramble onto an exposed ridge, cross a via ferrata route, ascend toward a snow dome, and rappel onto a glacier. A helicopter then takes the hikers back to the lodge.

Not all CMH outings require advanced mountaineering skills. Guides can suggest hikes ranging from strolls with stops for smelling the glacier lilies to boot-skiing excursions down snowfields. Hikers can hire a private guide for $765 per day (minimum of three days). The company also offers High Flying Heli-Adventures (approximately $2,275 per person for three nights) that are limited to just nine guests and include trips on the Adventure Trails.

CMH dictates that its guides achieve Canadian or international certification, which requires three or 10 years of training, respectively. Bernard’s record includes both first ascents and mountain rescues—experience I find reassuring when I slip and fall on the glacier. The rope Bernard is holding catches me faster than I can dig my ice ax into the snow. “I guess I’m not going to pull you off the mountain,” I joke.

“Nothing is going to pull me off the mountain,” he replies.

Even more than my massage that evening, Bernard’s words offer comfort in this isolated corner of Canada.