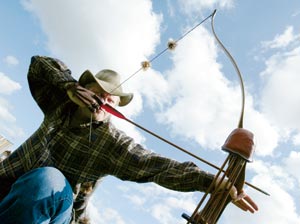 Clad in sleek, black suits that render them nearly invisible at this evening hour, the members of a small band of neophytic ninjas silently wind their way through the high alpine wilderness of Colorado’s White River National Forest. They employ their newly honed skills of evasion to slip undetected among the shadows before using their hand and foot spikes to scale a 10-foot wall as easily as a bear would. As they pause to plan their next move, one of them picks up the sound of clanging glasses and the scent of tangy barbecue. Breaking through the brush, they drop their utility belts, which carry arsenals of throwing stars and blowguns, shed their masks, and join the other Aspen Man Camp guests for dinner. Tonight, the chef has prepared wild game, which will be paired with fine Napa Valley wines.

As its name implies, the Aspen camp is a man’s world, one that combines testosterone-fueled activities such as nighttime ninja training, intuitive archery, and backcountry survival training with the more traditional acts of fly-fishing, rock climbing, hiking, and mountain biking. Also in the mix are a few offbeat—though no less masculine—tasks such as participating in a belly flop contest and judging a beauty pageant.

Designed to rid men of their inner child and unleash their inner beast, the four-day camp (which can be customized to be longer or shorter) is the creation of Joshua Landis, an Aspen-based personal trainer who holds a second-degree black belt in soo bahk do. He had grown tired of hearing about boot camps for women that promised tasty tofu, tighter buns, and inner peace, and he was horrified that women were dragging their male companions along to these places. “Going to a yoga retreat may feel good, but you can’t brag to your friends about it,” says Landis. “Men need to train intuitively. They need to have fun and let off steam.”

His philosophy involves liberating men from their artificial environments of office, gym, and auto, and introducing them to natural settings. “Instead of working out in a gym, we get out on the rocks and river and in the forest,” says Landis. Activities take place in spectacular Aspen settings such as the 12,095-foot summit at Independence Pass, which crosses the Continental Divide. Instead of being transported in a van, participants arrive at these destinations astride shiny Harley-Davidson motorcycles wearing custom-made leather jackets bearing the Man Camp logo.

“We want participants to gain a better understanding of their fitness and their goals,” says Landis. He achieves this by showing guests their physical limits and then respectfully pushing them so they learn to expand their comfort zones. “When you get scared, you begin to view things in a more instinctual way, and the activity then involves the mind along with the body,” says Landis. He allows groups to customize their camps, and he also runs four preset camps throughout the season (two in June, one at the end of July, and the other at the end of August, with prices beginning at $1,200 per person, depending on the activities selected). Accommodations can be arranged at the St. Regis hotel with the option of spending a night camping in a well-stocked 10th Mountain Division Hut after a day of hiking or mountain biking. To balance the barrage of physical pursuits, campers also enjoy gourmet dinners, cigar and Scotch tastings, and spa treatments.

“The Man Camp is more about living the good life and having fitness be a big part of that life. It’s not about cutting the carbohydrates out of your beer,” says Landis. He adds that he hopes participants return home with a renewed sense of balance in their lives, excited about the challenges they faced and happy to have reconnected with friends, self, and nature. Failing that, at least campers can keep their ninja suits.