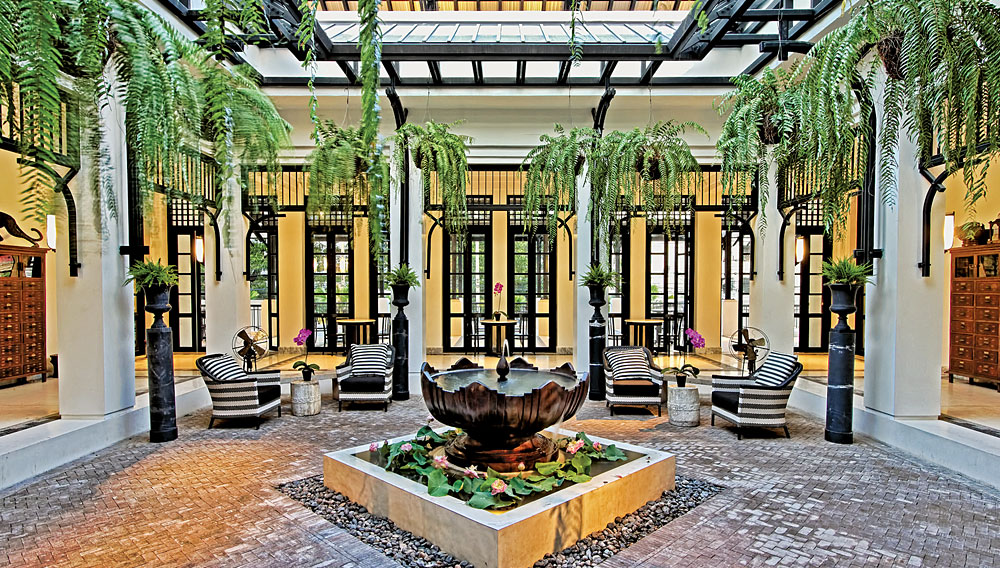 “Jab, kick, jab, kick!” Khun Bee commands as I hurl my limbs awkwardly at the muay Thai master’s sparring pad. Bee, who runs the new martial-arts training program at the Siam hotel in Bangkok, has been polishing what he calls my “eight weapons”—elbows, fists, knees, and shins—all morning. My weapons do not get as much regular exercise as they should, but I dutifully follow Bee’s instructions, positioning my legs apart in a perpetually swaying stance, my forearms raised in front of my face and angled inward like the roof of a Thai temple. From the moment my first punch makes contact with the pad, I am hooked.

The Siam’s muay Thai training program, which launched in May, gives guests the opportunity to practice the ancient sport while staying at the colonial-style retreat (one of Robb Report’s 2013 Best of the Best hotels). Customized programs range from one day to one week and accommodate everyone from advanced boxers to ring rookies like me. During my three-night itinerary (priced from around $2,500), I attend sessions at the hotel’s professionally equipped training center, where, for several hours each day, Bee and I spar in short stretches—allowing plenty of time in-between to catch my breath. With each knee strike, elbow slash, and cobra punch, I feel more and more like an ace fighter. Sporting the hotel’s custom black-and-white satin boxing shorts and a pair of sleek leather gloves embroidered with my name, I certainly look the part.

When not sharpening my fighting skills, I recuperate with healthy meals specially prepared by the Siam’s acting executive chef, Tawachin Keanchan, and perfect my technique by watching films at the Siam Cinema that explain the culture of muay Thai. At the hotel’s Opium Spa, daily treatments such as the Thai herbal-compress massage restore my aching limbs for the next bout. Private sunrise yoga sessions overlooking the Chao Phraya River are also offered, but I choose to save my strength for my sessions with Bee.

My fighting fantasy meets reality, however, when Bee sends me to Bangkok’s legendary Lumpini Stadium to witness a real muay Thai prizefight. The scent of camphor fills the arena as fighters ferociously hook-jab-knee-kick their opponents under the gritty green light of hanging fluorescent bulbs. Blood and sweat fly through the air, sometimes landing inches from my ringside seat, while all around me screaming fans erupt at every blow.

The action at Lumpini proves encouraging, if mostly unrecognizable from my session back at the Siam the next morning. During my final spar, Bee tells me that some Thai people believe muay Thai has curative powers—even though it has historically been used to fight the Khmer, the Burmese, and each other. Indeed, as I unwrap my wrist guards, my creaking joints and trembling muscles feel more like spent weapons than aching limbs.