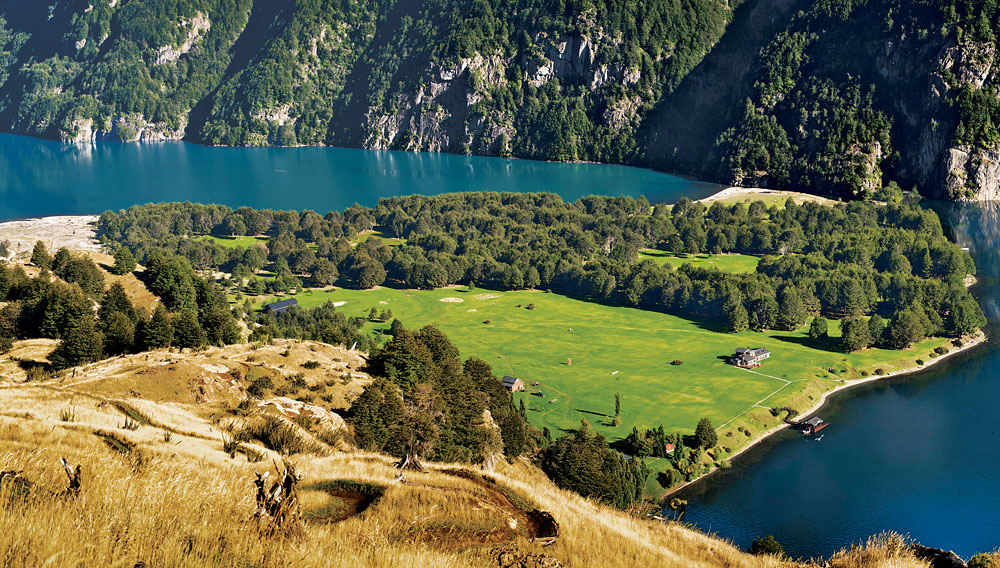 The kill happens suddenly with a pounce and a hare’s tail dangling from one of our dogs’ mouths. Our group sits on horseback in an open field, with the jagged peaks of the Andes rising all around us. Fifteen minutes ago, we were speeding across Lago Azul on a 420 hp jet boat, on water so turquoise and shimmering we could have been in Polynesia. But there is no mistaking where we are now; coigue and lenga forests cloak the Patagonian peaks, a few capped with snow. In a few minutes, we will be riding through the hills with a herd of Angus cattle while waterfalls cascade on either side of us. Tomorrow, we will fly-fish for trout on otherwise inaccessible rivers. Yesterday, condors soared overhead as we mountain biked through private canyons and then soaked in a wood-fired hot tub, gazing at a glacial lake 2,000 feet deep.

Our base for these blissfully remote adventures is Dos Lagos, an Endless Waters Ranch Lodge, in southern Chile. Opened in late 2010, the nearly 15,000-acre property sprawls along the edge of the Cerro Castillo National Reserve in Patagonia. The lodge itself sits on a narrow peninsula between two lakes, where a short boat ride—preceded by a two-hour flight from Santiago and a 50-minute drive—marks the end of the long journey to reach Dos Lagos.

Alberto Sassoon, one of Dos Lagos’s owners, thinks of the property as “Fitzcarraldo in Patagonia,” a nod to Werner Herzog’s film about a man who wants to build an opera house in the South American jungle. “There was nothing here when we got started,” says Sassoon. “We had to bring everything in by barge, helicopter, or boat, since that’s the only way to get here. But that’s also what makes Dos Lagos private.”

Available to just one group at a time for a minimum of five nights, Dos Lagos hosts guests in a four-bedroom main building, two two-bedroom cottages, and a barn-style structure with six additional rooms. Rates for a five-night stay range from $13,200 for four guests in low season to $42,200 for eight guests during high season. All meals—featuring local delicacies such as barbecued Patagonian lamb, overseen by Santiago chef Giancarlo Mazzarelli—are included.

The “barn” at Dos Lagos also features a hangar for the resort’s twin-turbine helicopter, which is outfitted with racks for heli-biking. Guests enjoy use of eight double-suspension mountain bikes plus two smaller bikes for kids, as well as seven boats, 13 Polaris UTV buggies, kayaks, river rafts, and horses.

Waiting to be explored are the property’s four interconnected lakes, four large trout-rich rivers, many smaller fishable rivers and streams, waterfalls, pastures, mountains, and forests. Seventy-five miles of professionally built mountain-biking trails (also used for hiking and for Nordic skiing) make up what is likely the longest private network in the world.

Most guests at Dos Lagos take full advantage of the endless opportunities for adventure that the Patagonian terrain affords. However, says Sassoon, a good time is guaranteed at Dos Lagos “even if you choose to do nothing here but sit back and relax.”