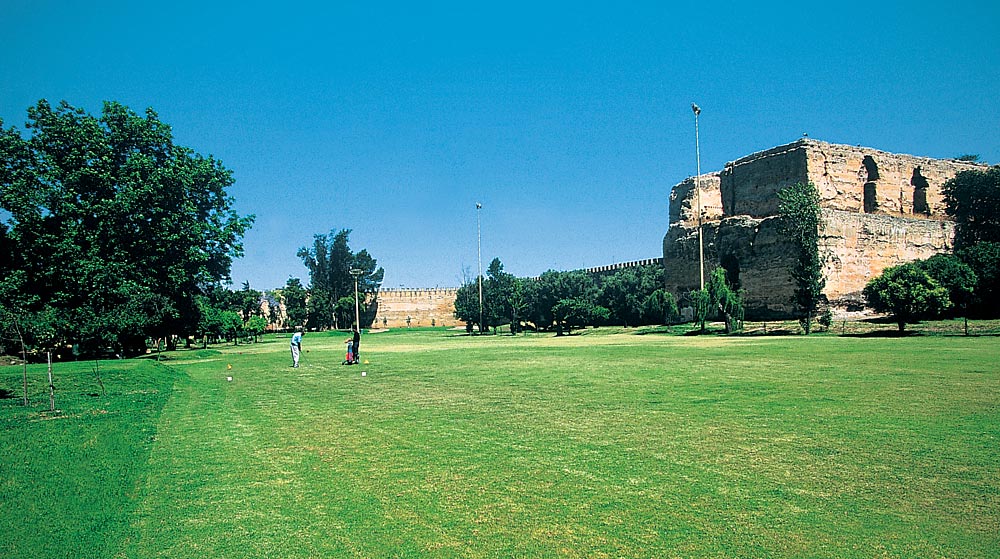 Golf first came to Morocco in 1914, when Sultan Abdelaziz, who had ruled the country from 1894 to 1908, commissioned a pair of British golf architects, Henry Cotton and Frank Pennink, to design an 18-hole course at the foot of the Rif Mountains in Tangier. Neither designer saw the course completed, though, as Morocco was then in turmoil. The final nine holes were not added until 1960, and King Hassan II subsequently reshaped the course time and time again, according to his whim. In its current form, the Tangier Royal Golf Club (+212.39.93.89.25) overlooks the confluence of the Atlantic Ocean and the Mediterranean Sea; the wind blows off the water and through stands of oak, pine, and eucalyptus trees.

The city of Marrakech, to the south of Tangier, is home to three clubs. The oldest and most fashionable is the Marrakech Royal Golf Club (+212.44.40.98.28), where the terrain is ablaze with bright red flowers and apricot and orange trees. Built in 1923 by the Pasha of Marrakech, the Marrakech Royal was designed by Arnaud Massy and was a favorite of such golfing luminaries as Winston Churchill, David Lloyd George, and Dwight Eisenhower. The club offers Africa’s only David Leadbetter Golf Academy, but the most distinctive feature of the three courses is the Koutoubia course’s ninth hole’s “Brigitte Bardot,” a pair of twin hillocks, which, if you have a vivid imagination, seem to be heaving passionately.

The Meknes Royal Golf Club (+212.35.53.07.53, www.royalgolfmeknes?.com) is located in the heart of Meknes. Historians and botanists consider the city—founded in the 17th century by Sultan Ismail, who is said to have fathered 888 children—the Versailles of Morocco. This nine-hole, par-36 course is set within a garden of hyacinth and mimosa and surrounded by palace walls. Hassan II transformed the garden into a golf course and equipped it with lights for nighttime play.

The Royal Golf of Fez (+212.55.66.52.10) lies just outside of Fez, which is the site of the world’s oldest continuously operating university and the third-century B.C. Roman city of ?Volubilis. The Fez medina, or old city, has some 9,000 different streets that zigzag every 20 feet or so, changing names as they go. Some golfers find navigating the Fez club’s par-72 golf course, which Cabell Robinson laid out in an olive grove, as challenging as finding their way through the medina.