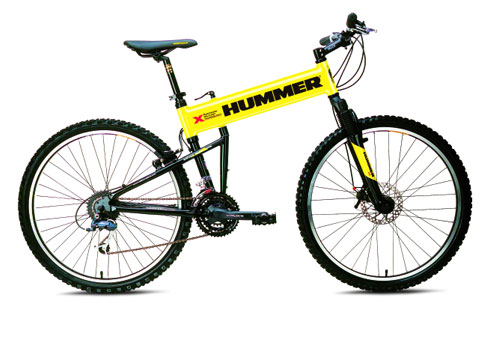 The roads of late winter, battered for months by snow, sleet, and ice, devolve into a patchwork of glacial potholes and mountainous frost heaves, pounding suspensions and puncturing tires of everyday vehicles. The new Hummer, however, rumbles worry-free over such obstacles, creating a wake of slush, salt, and gravel. Even a road-closing construction site cannot deter the driver of this Hummer. Simply pick up the machine, sling it over the shoulder, and walk around the obstruction.

David Montague, president of Montague Corp., calls the $700 vehicle that his company makes the most inexpensive Hummer—and, at 29 pounds, the lightest—on the market. The machine is the Hummer Tactical Mountain Bike, a 24-speed bicycle available online (www.hummerstuff.com) and at Hummer dealerships. The bike can be purchased separately or as an accessory—like a grille guard or roof rack—for the H2.

While the 10-mpg H2 consumes nearly $50 of unleaded per tank, its two-wheeled counterpart runs on a healthy set of lungs and legs, making it the most, if not the only, environmentally friendly Hummer. The frame is constructed of sturdy lightweight aluminum and features a front suspension fork with 65mm of flexibility that renders the bike firm but just cushy enough to negotiate pockmarked roads. Shimano components allow for smooth shifting.

The truly distinguishing feature of Montague’s bike is that it can be folded into a tidy shape only slightly larger than its 26-inch wheels. This can be especially convenient for H2 drivers. For all of its immensity, the 189.8-inch-long SUV suffers from a puzzling paucity of interior space. After removing the bike’s front tire, flipping a lever, and folding the frame in half, you can stand it upright next to the H2’s spare tire and leave enough room for several shopping bags. “People have no idea, not in a million years, that you can fit it right into a trunk,” says Montague, demonstrating his ability to fold the bike in 10 seconds. “It’s continually an eye-opener with people. There are a tremendous number of folding bicycles, especially in Japan, but the big difference is that they have small wheels. We make full-size high-performance bicycles. It’s a bicycle, first and foremost.”

The Hummer bicycle is the civilian version of a model Montague designed for the U.S. military in 1997, the Paratrooper, a folding 24-speed bike used in airdrops. According to Montague, American soldiers recently rode the Paratroopers in Afghanistan to patrol areas between light armored vehicles. When not riding the bikes, the soldiers stashed them in the backs of their Humvees. “It doesn’t make a lot of noise,” says Montague. “It doesn’t produce a heat thermal source, so it allows you to go silently and undetected.”

With warmer days upon us and repaved blacktop under our wheels, the Hummer Tactical Mountain Bike is no longer necessary for navigating the New England streets. But then again, it does share kinship with the H2, a vehicle that can hardly be deemed a necessity.

Michael Jordan How to Buy Like Mike: Where to Get Michael Jordan’s Favorite Tequila, Cigar, Watch and More
ad