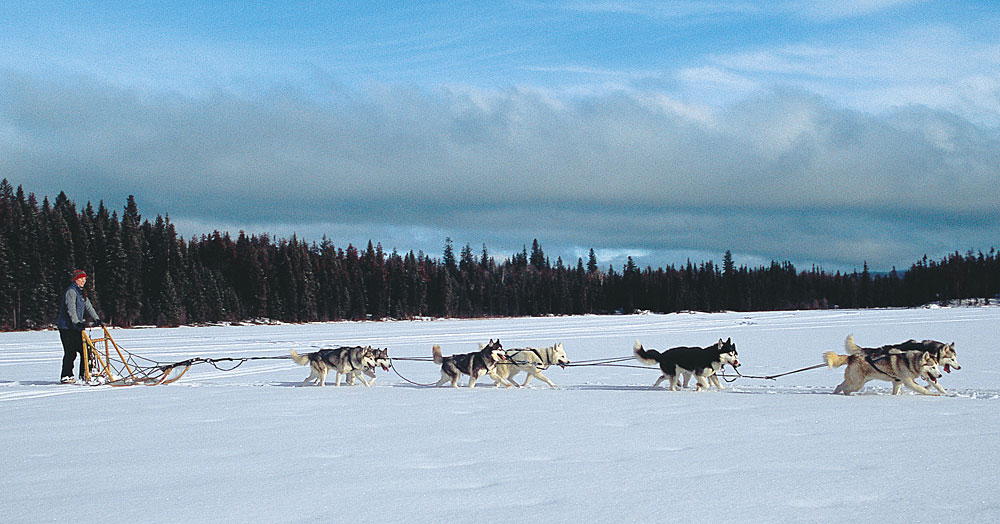 Rough start, I think, as my sled—pulled by eight yapping Siberian huskies that suddenly have become a blur of tangled harnesses and black and white fur—skids out of control across a frozen driveway. Per instructions, I had begun the ride with one boot firmly planted on the drag mat, a device designed to slow forward progress, and the other on the brake, a device theoretically capable of halting it. Yet now, with both feet and all my weight on the brake, I hurtle across the ice at an alarming speed. The pace is all the more surprising given that the two lead dogs are behind the second-position dogs and facing sideways.

The night before, at the Siwash Lake Ranch lodge in British Columbia’s Cariboo Country, owner Allyson Rogers explained the rudiments of dogsledding to her guests. The trails we would negotiate cut through 80,000 acres of wilderness, land that Siwash visitors explore mostly by horseback from May 1 through mid-October. During January and February, however, one group of guests at a time can stay in the elegant 7,000-square-foot ranch house (which accommodates a maximum of 12 people in six rooms) and romp through the powder and ice on snowmobiles or dogsleds.

I was concerned initially that we had flown from Vancouver to Kamloops, then driven two and a half hours to Siwash, for a kiddie ride, the kind of once-around-the-parking-lot introduction to dogsledding that some Alaskan resorts offer. But as Rogers explained the mushers’ calls, then gracefully demonstrated how to transfer one’s weight so the sled does not topple over in tight turns, I began to understand why Siwash’s questionnaire had asked how fit we were. Rogers emphasized that the sport has only one inviolate rule: Never let go of the sled. She then acknowledged that she has been dragged occasionally while heeding that rule.

Before I have an opportunity to disobey dogsledding’s one commandment, an employee of Nakitsilik Outdoors Adventures, the mushing concessionaire for Siwash, hops on my runaway sled, stomps on the brake along with me, then jumps off to untangle the dogs. “Hike!” I yell when the lines are straight again. The dogs jolt forward and descend the steep driveway at a sprint. When I shout, “Gee! Gee!” they veer right onto a narrow trail through the woods.

Over the nearly 18 miles we cover that morning—past frozen lakes and across meadows bisected by zigzagging fences—I awkwardly muscle the sled around tight turns, stumble a few times, and struggle up hills. While going uphill, I run behind the sled to lessen the dogs’ burden; on the descents, I apply the brake so the sled does not crash into the animals. And though nearly doing so on a few occasions, I let go of the sled only once—after yelling “Whoa!” back at the ranch.