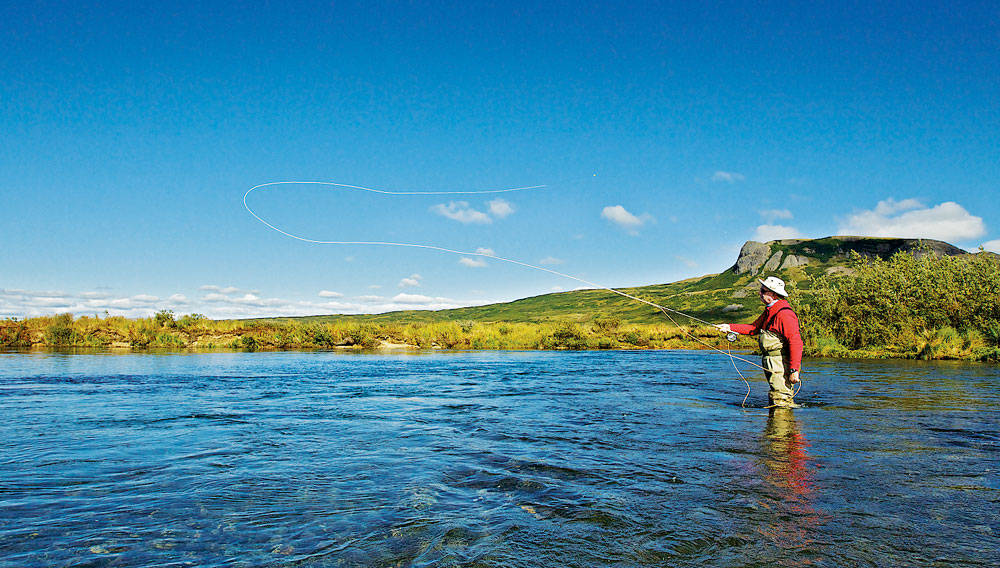 The yellow strike indicator disappeared below the surface of Alaska’s Upper Newhalen River, followed almost instantly by a huge silver flash breaking the water downstream. My fly line unspooled with a high-pitched whine as I quickly raised the tip of my rod, a reaction that by then had become second nature. Back and forth I had been doing this dance for three hours on the Newhalen, an icy river that feeds into Lake Iliamna, Alaska’s largest body of freshwater. Strike after strike, the flood of silver salmon, grayling, and massive rainbow trout was unceasing.

“How many places can you go and catch a 25-inch trout and say, ‘That’s not what I came for—I came for a 30-incher’?” a fellow guest of the Rainbow King Lodge asked me before the drive to the Newhalen Gorge that morning. Indeed, the Rainbow King Lodge, located 190 miles southwest of Anchorage in Iliamna, has long been renowned for the immensity of the local fish—which might explain why 85 percent of guests return to the resort. Now, however, the lodge itself is looking more like a good catch, following a change in ownership and a range of upgrades last year.

Set on the shores of Lake Iliamna, Rainbow King’s 40-year-old main lodge retains the atmosphere that returning guests expect, complete with log furniture, wall-mounted trophies, and pool and card tables oriented around a central fireplace. Flanking the main lodge, the eight guest accommodations (all-inclusive, six-night stays cost $8,150 per person, including round-trip airfare from Anchorage) have been upgraded with new bathrooms and custom mattresses.

Rainbow King has also updated its fleet of three de Havilland planes, which specialize in carrying heavy loads and taking off at low speeds to maximize access to small bodies of water. The three aircraft and the lodge’s seven rafts and 25 boats facilitate trips into a 90,000-acre wilderness that includes Alaska’s only designated trophy-trout fishing area and five unnamed, privately licensed streams.

Over the 16-week summer season, Rainbow King’s expert guides fish between 30 and 40 locations, matching the desires and abilities of their guests (the lodge accommodates a maximum of 16 at a time) to productive waterways. Target catches include Arctic char, grayling, halibut, northern pike, all five species of Pacific salmon, and, of course, rainbow trout. The best time to catch the fat rainbows—whose girth has given rise to the nickname “footballs”—is late August through early September, when I visited last season.

In addition to our day on the Upper Newhalen, the Rainbow King guides led me by de Havilland Otter floatplane to the Lower Talarik River for fishing and a lunchtime feast of shrimp jambalaya by the shore. Other excursions included a float down the Gibraltar River, where we passed a half dozen grizzlies on sockeye-salmon patrol, and a jet-boat fishing trip on the Lower Newhalen. Though I never landed the elusive 30-incher, in three-plus days of fishing I caught and released approximately 50 fish, mostly rainbows, some of which measured as long as 24 inches.