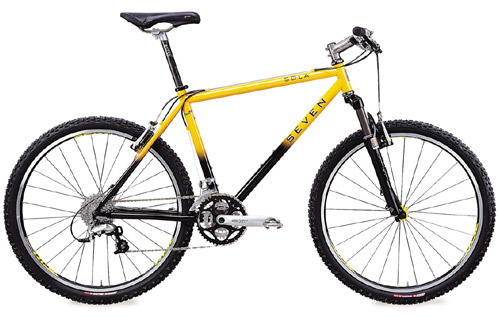 Behind the dusty windows of a tiny storefront, Allen Trepel and his son Keith hover over Paul Livornese like surgeons, eyeing him intently. They pull out a measuring tape and gauge the lengths of the 39-year-old’s inseam, torso, forearms, and calves. They calculate the angles of Livornese’s body—standing, seated, hunched over, leaning.

The Trepels are master tailors, but instead of working in doupioni silk, their materials are titanium and carbon fiber, the stuff of today’s high-end custom bicycles. Their Savile Row is Brooklyn’s Coney Island Avenue, where the Trepels, after taking Livornese’s measurements, ask their client to ride a bicycle up and down the sidewalk in front of their shop, Roy’s Sheepshead Cycle. Livornese dodges broken glass while Allen Trepel crouches at the curb and examines his every stroke.

For 10 years, Livornese struggled riding stock bikes jury-rigged to fit his 5-foot-9 frame, until he went to purchase a Merlin bicycle at Roy’s, where Allen Trepel instead recommended a custom-fitted Seven Cycles machine. Roy’s is a dealer for Seven Cycles, a Watertown, Mass., company that claims to be the world’s largest custom frame builder. “I came to realize that ergonomics are such an important part of comfort on a bike,” says Livornese, a creative director at Essence magazine.

At Roy’s, Allen Trepel drops plumb bobs from Livornese’s knees to calculate his pedaling posture and grills him about his riding style. Trepel points out that a custom-fitted bike won’t turn you into Lance Armstrong—in fact, Armstrong has raced a production bike to three Tour de France victories—but it will make your ride infinitely more comfortable. “I draw an architectural, anatomical picture, find your weak points, and compensate for them,” says Trepel, who sells about 25 custom bikes a year in the $4,000 to $6,000 range.

After hours of study, Trepel sends Livornese’s specs to Seven Cycles, which handcrafts road, mountain, and tandem bikes from titanium, carbon fiber, and steel. Using the data provided by Roy’s, Seven Cycles begins to assemble Livornese’s custom bicycle. Rob Vandermark, the company’s cofounder, calls Livornese during the production process, directing his client to a private web site that enables him to monitor his bike’s progress during assembly.

“Riders have come to accept that numbness or pain is part of cycling,” says Jennifer Miller, who cofounded the company with Vandermark in 1997. “But they’re not. Custom bikes are for riders who will not compromise on fit, handling, or performance. They are for those who want to maximize their free time on a bike.”

Six weeks after his appointment at Roy’s, Livornese receives his $5,500 Sola titanium mountain bike. After the initial day of measuring, fitting, and tailoring, it’s no surprise that Livornese feels as though he’s wearing his bike, not just riding it. “I can ride this bike for hours and feel like I was never on it,” says Livornese, “but the best thing is I know there’s not another one like it in the world.”