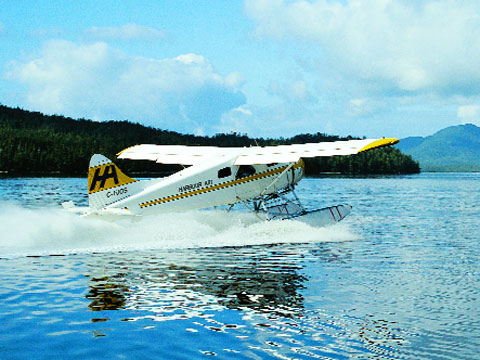 After 19 hours of riding in a truck, a shuttle, an Air Canada airbus, a prop plane, a van, and a floatplane, I finally arrived at King Pacific Lodge, a floating paradise in British Columbia’s Barnard Harbour. Having traveled from Los Angeles to Vancouver to Prince Rupert, then another 56 miles south to the lodge, I gladly traded modern means of transport for a paddle and a canoe.

A mere 10 minutes from the lodge’s deck, with a radio tucked in my life vest just in case, I found myself entirely alone in a paddler’s wonderland as the sunlight slanted through the mist. Not a man-made object was in sight—no boats plying the intricate waterways that snug the area’s archipelago, no roads spoiling the thickly forested islands, no hurry, no stress. The only sounds were the caws of seagulls and the snorting of a sea lion.

Nature’s offer of tranquillity is the recurring theme of a visit to this destination, which for me also included kayaking in nearby Cameron Cove, where I was fascinated by the pink salmons’ timeless march toward reproduction and death and by the bald eagles’ seemingly effortless swoops and soars. All of nature’s sights and sounds combine to convey a sense that King Pacific Lodge exists in a different time-space continuum than the rest of the world. Even FedEx delivers only twice a week.

KPL, as the monogram declares, settles like a platonic kiss along the shore of uninhabited Princess Royal Island, and the lodge’s understated, rustic elegance complements the pristine surroundings. Pine columns, red-cedar paneling, and slate flagstone floors harmonize with the Sitka spruce and Douglas fir that define the water’s edge. The 17-room lodge, which is part of the Rosewood Hotels & Resorts group, sits just off shore, moored to pontoons from May to October. Once the guests have completed their guided summer hikes, kayaking trips, fishing excursions, and wildlife viewings—or merely indulged in the relaxing scenery and the spa—KPL is towed north to Prince Rupert for the winter.

Other floating lodges exist, of course, but KPL is far more than a rudimentary fishing camp. With its warm light, welcoming sofas, regal fireplace, and well-appointed rooms, KPL feels like home, right down to the top-shelf staff. World travelers could find more luxurious accommodations, but no five-star hotel is as comfortably remote and melds with nature as thoroughly and as gracefully.

The day of canoeing was appropriately capped off with a dinner of grilled spring salmon in a miso-prawn broth and a restful night’s sleep aided by a stream-sung lullaby. The next morning, I disappeared into the wilderness again, this time via a helicopter that deposited us on the B.C. mainland, on the shore of the stunning Khutze Lake in the Kitimat Range. We were 1,000 feet below our destination: a windswept, unnamed peak. The view of the Inside Passage far below, as well as the moss-covered cirques, the glacier-carved valleys, and the fog-cuddled summit of Marmor Peak only a wolf’s-howl away, upped the ante for hiking for me forever. Undoubtedly, on future outings a little voice will repeatedly say, “Nice view, I suppose, but don’t you remember Khutze Lake?”