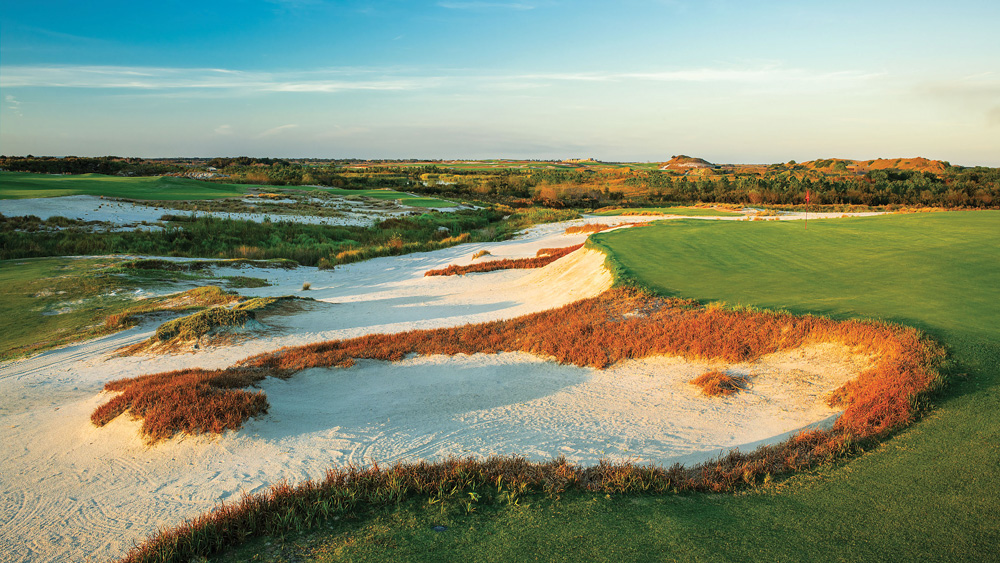 The buzz around Streamsong Resort has barely relented since it debuted in January 2013. Even though it did not have lodging finished during its first year, golfers were willing to trek to this abandoned phosphate site in the middle of central Florida. Though only an hour from Tampa, driving to Streamsong feels like you’re driving into the heart of a Florida that has yet to be touched by the outside world—or the large mouse in Orlando. Making a turn onto one of the region’s many back roads, where native grasses bow to your car as you speed by, you eventually see the ultramodern resort’s new lodge seem to rise out of the landscape like a beacon.

Once inside, you’ll be greeted by sleek Herman Miller–inspired comfort and gourmet food. But make no mistake: Streamsong is all about the golf. This fall, the resort, which already boasts the acclaimed Red and Blue courses, opened the Gil Hanse–designed Streamsong Black. The man with the vision behind Streamsong was mining outfit Mosaic Company’s Rich Mack, who saw what the land could offer to golfers while four-wheeling on the property one summer.

What made you think of creating a golf course rather than the sort of land-reclamation project the Mosaic Company would have typically employed?

In 2007 or 2008, we were looking for different strategies for our land holdings in Florida. In the process of mining phosphate or potash for fertilizer, we reclaim the land and restore it back to various forms of Floridian landscape—such as wetlands or prairie lands. I was out with a colleague, and we were four-wheeling, and we went out to search and see if we could find something that would be viewed differently by the various constituencies we deal with, from regulators to environmentalists.

From my perspective, growing up around golf and playing a lot of elite courses, once I realized the topography and sand base we had, I saw we had something special. I took a lot of that inspiration from Sand Hills Golf Club in Nebraska. I mentally and emotionally registered the sense of tranquility and isolation I felt when I was out there, and I see those parallels in Streamsong.

How hard was it to convince the Mosaic Company to get into the golf business, especially when the project began during the economic downturn? How much was the resort’s potential profitability a hindrance or motivation?

In the end, this is an investment that is intended to have a return on it. From the very beginning, the general premise was to do this in a way that was shareholder-friendly and return capital to Mosaic over time, and that was a large consideration. It was a new concept at one of the most illogical places in the country at a time when golf was on its heels [due to the economy]. We had to do something that was unique and appropriate. If you do it the right way and it’s thoughtful and you partner with the right folks, you can do something that provides an experience that is a significant differential from anything you might be able to get out there elsewhere. To have three top-25 golf courses in the United States at a public facility where you can get out and play, and the only venue in the world with Bill Coore and Ben Crenshaw, Tom Doak, and Gil Hanse [whom Robb Report recently spoke to about Streamsong Black] with the critical review and feedback we’ve had, is almost surreal. But I do have big expectations, and I try to drive our team to deliver excellence in everything we do—and we’re doing great.

What’s in store for the future?

Three courses is great, but I believe four courses is something Streamsong should have. A destination resort like ours has to maximize the fixed income investment, and we are a golf facility. There are some interesting potential things we have in mind. A lot of places have added short courses, and we’ve done something different with our Gauntlet putting course and the Roundabout course, which is free-flowing and lets you pick your way around the course. I think some villas along the water are in our future. But if we were to build a fourth, it would need to be one that provided sufficient distinctiveness and variety versus Red, Blue, and Black. You need to have a story more than anything else. It can’t be haphazard. There needs to be a rationale and a positive and compelling story as to why we’re building a fourth course and how it fits in with the rest of the resort.

What differentiates Streamsong from other golf destinations?

I think what separates us is the all-in experience—the sense of the moment on the courses when you’re playing, the unexpected topography matched with the unexpected architecture of our buildings, and what I would say is the significant passion of the people that work there that want to make sure you have the best time of your life. We’ve worked hard on food and creating special experiences from our rooftop bar at the lodge to the specialty foods offered at the halfway houses out on the courses. When I go down there, I don’t touch my car for 2 or 3 days. It’s a great way to check out and be away.