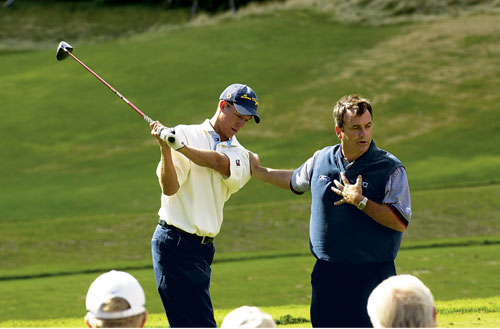 Rick Smith does not have a particular style to imprint on his pupils. When working with professionals such as Phil Mickelson—or with amateurs at his Rick Smith Golf Academies at Treetops Resort in Gaylord, Mich., and the Ritz-Carlton in Naples, Fla.—the instructor prefers to make the most out of what the golfer brings to the practice tee. “You have to do something to get them excited and pumped up,” says Smith, one of Golf Digest’s Top Five Golf Instructors in the World every year since 2000. “Show a guy who’s spent a lifetime battling a big slice how to hit a draw, and he’ll start jumping up and down!”

Smith, who also is a course designer and host of the Golf Channel’s The Big Break, emphasizes the importance of knowing yourself and your swing. Perhaps for that reason, students at Smith’s academies can expect to spend plenty of time in front of a mirror, perfecting and, at times, distorting their body motion. “I get students into exaggerated modes of change to show them that it’s okay,” says Smith. “The mind hates to make changes, especially the pros, who deal with fractions and very sensitive variables.”

Working with his longtime school director, Henry Young, and other apprentices, Smith limits his classes to two students for every instructor. His staff utilizes an array of swing aids, video technologies, and other gizmos, but Smith’s and Young’s experienced eyes are the most effective tools in identifying the traits to exploit or expunge from a particular golfer. Of course, because of his many roles in the golfing world, Smith is not present for most classes at his two academies. However, those who want to spend quality time with the man himself can enroll in a Rick Smith Premier program, which consists of a 31¼2-hour session with Smith, Young, and another of the academy’s instructors.

Location:  May through September at Treetops Resort in Gaylord, Mich.; year-round at the Ritz-Carlton Golf Lodge at Tiburón in Naples, Fla.

Format: The school offers several sessions, ranging from two half-days with Young to a three-day, full-day program that covers the entire swing. The Rick Smith Premier session is limited to six participants and includes 31¼2 hours of instruction with Smith, Young, and one additional academy instructor.

Rates: Begin at $675 for the two-half-day program.