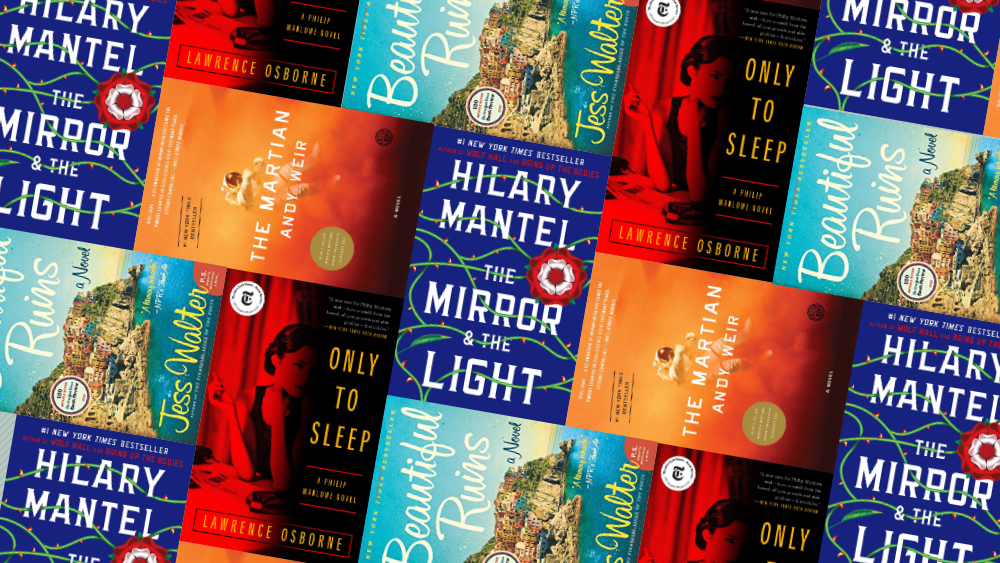 This summer you may be among the lucky few to be heading off on an actual beach vacation, but even if you are summering within the confines of the four drab walls where you’ve also spent the last four months, we are here to bring some light relief, distraction and exotic dispatches from far-off lands. We’re talking summer beach reads —“beach” to be interpreted in the widest possible sense, including your back yard or the cupboard you go to escape your children.

In the world of the literary imagination, there are no travel restrictions; no public health advisories limit the scope of escapist novels, thrilling memoirs or tales of high crimes and misadventures from Mars to Monaco, from Baroque Sicily to Tudor London or from the Gulf of Finland to the Mexican border, while debutantes dance through Southern ballrooms and expats bed-hop around colonial Alexandria.

Our recommended reading list does not restrict itself to new releases, though these are included. Robb Report staff have also weighed in to recommend their favorite escapist, evocative books, tales that transport them to another, preferably more glamorous, world. This summer (and let’s hope it is only this summer), let’s indulge in unrestricted travel, in our imaginations.

‘The Leopard’ by Giuseppe di Lampedusa

A semi-autobiographical novel by the last Prince of Lampedusa, The Leopard is a majestically evocative elegy for Sicily’s fading aristocracy. The compassion and pathos with which Lampedusa—who died childless in 1957 having failed to find a publisher for his only novel—describes the destruction of his own family is irresistible. He depicts in sumptuous detail the glittering parties, gardens and palaces of the nobility as they shimmer and desiccate in Sicily’s blazing heat, the crumbling citadels a metaphor for the decaying power of the entire feudal system. Published a year after Lampedusa’s death, it became an instant best seller. Read it, then luxuriate in Visconti’s lavish 1963 movie adaptation. —Lucy Alexander, staff writer

‘The Summer Book’ by Tove Jansson

Best known for her endlessly charming Moomin comic strips, Jansson also penned a number of slim novels for adults, each of which are perfect in their own unique way. My favorite is The Summer Book, a quiet story about a little girl and her grandmother whiling away their summer on a small island in the Gulf of Finland. Although it’s meant for older readers, it’s slightly melancholic in the way that so many children’s classics are, and just as transporting. —Bryan Hood, digital staff writer

‘The Martian’ by Andy Weir

A self-published novel that became a Golden-Globe-winning movie starring Matt Damon, this fictional tale of Mark Watney, an astronaut who gets stranded on Mars, is prime sci-fi escapism. It’s also a study in extreme isolation. Watney’s humorous voice and lighthearted attitude make this tale of survival under adverse circumstances a surprisingly fun, quick read. Plus, Watney’s not a top astronaut: He’s a botanist and a pretty normal guy, which made me feel like exploring Mars was a (slightly) more attainable goal that I too might be able to experience come 2035. —Helena Madden, junior writer

This hair-raising account by three UN aid workers of life on the front lines in 1990s conflict zones is one of my favorites. A travelogue/true story/war story/memoir that’s heartbreaking and joyful and makes you want to make a difference. —Paul Croughton, editor in chief

This book transports me to India. Its descriptions of the subcontinent are so evocative and accurate that I’m back as that child stepping off the plane for the first time with my parents. And it has the single best opening sentence of any piece of fiction, ever: “It took me a long time and most of the world to learn what I know about love and fate and the choices we make, but the heart of it came to me in an instant, while I was chained to a wall and being tortured.” —Viju Mathew, automotive editor

‘Only to Sleep’ by Lawrence Osborne

Osborne was hired by the Raymond Chandler estate to write an authorized Philip Marlowe private-detective novel. Only to Sleep, which is very well-written, has Marlowe as an old man investigating shady characters in Mexico. Osborne does an excellent job capturing the spirit of Chandler without lapsing into a bad imitation. And the setting on Mexico’s west coast is well evoked, at times luxurious, at others gritty and parched. —Jim Cholakis, senior copy editor

An epic, obsessive food odyssey by one of the finest non-fiction writers alive. After profiling the (yet to be disgraced) chef Mario Batali for the New Yorker in the mid-2000s, Buford follows the famous cook’s culinary education: first in the scalding, anonymous pressure cooker of a Michelin-starred NYC kitchen, then learning the secrets of pasta in Italy and, finally, under the tutelage of a wildly anachronistic Tuscan butcher. Buford leads the reader across the world, into kitchens both personal and professional, deftly exploring cuisine’s role in shaping identity, community and personal history. —Josh Condon, deputy editor

‘The Sisters Brothers’ by Patrick DeWitt

A Western novel with a modern sensibility and sense of humor, with great characters and a gritty feel. There’s a sense of camaraderie between the two brothers in the novel, who are paid assassins hired to find an inventor who has a secret for finding gold during the California Gold Rush. —Michael Verdon, marine and aviation editor

The origins of this principality might technically lie in the Middle Ages, but Monte Carlo as we understand it was really created in the late 19th century by a smart Frenchman with an eye for an opportunity and then turned into an international playground by the American proto-publicist Elsa Maxwell in the 1920s. Though it doesn’t tackle modern Monaco—a pity, given the stories that it could have covered—it’s a delicious dive into how and why this tiny rock on the Med turned itself into the archetypal sunny place for shady people. —Mark Elwood, editor at large

A decade-spanning story of a Hollywood starlet whisked away from Richard Burton and Elizabeth Taylor during the filming of Cleopatra, and hidden in a coastal Italian village. The innkeeper watching over the young actress falls for her and years later ventures to Hollywood to see if he can find her. —Jeremy Repanich, culinary editor

‘The Cartiers: The Untold Story of the Family Behind the Jewelry Empire’ by Francesca Cartier Brickell

I was expecting this history of the Cartier clan to be drab but educational. Instead, it’s a page-turning glimpse into the lives of a fascinating family, who against all odds—including the Great Depression and two world wars—turned a tiny Parisian retail boutique into a great jewelry house. Brickell, the granddaughter of Jean-Jacques Cartier (the last family member to run the empire), wrote the book after discovering a dusty old trunk in her grandfather’s wine cellar on the eve of his 90th birthday: It contained a treasure trove of handwritten family correspondence, lost for decades, that would shed light on the personal lives of four generations of luxury’s greatest entrepreneurs and creatives. A must-read for watch and jewelry enthusiasts. —Paige Reddinger, watches and jewelry editor

‘The Dutch House’ and ‘Bel Canto’ by Ann Patchett

Patchett is a master of the modern fairy tale, transporting the reader into finely realized fantastical worlds, woven through with melancholy and threat. Bel Canto, which won the Orange Prize and the PEN/Faulkner Award in 2001, is a whimsical hostage thriller set in a palatial embassy, while last year’s The Dutch House spins a story focused on a sumptuous mansion, whose grand façade conceals a complex history. It’s a master study in the power one place—a home—can wield over a family across time, in both healthy and unhealthy ways. —Janice O’Leary, executive editor

I read the first of Durrell’s “Alexandria Quartet” before a recent trip to Egypt. The writing, at times a bit florid, really captures Alexandria’s allure—equal parts elegant and squalid—and transports you to this time and place of gritty glamour between the two world wars. It has posh café society, a seedy underworld and bed-hopping intrigue, all set against a backdrop of the Mediterranean. —Kareem Rashed, style editor

‘Sex and Vanity’ by Kevin Kwan

The latest confection from the author of Crazy Rich Asians is a Hamptons-set homage to E.M. Forster’s A Room With a View. The plot is the same: Will our heroine, a well-bred but insecure ingenue, chaperoned to within an inch of her life, jilt her eligible fiancé and run off with gorgeous George? Don’t expect subtlety or character depth; do expect a romp through what the publisher calls “summer playgrounds of privilege, peppered with decadent food and extravagant fashion,” shot through with wicked satire.

‘Love and Theft’ by Stan Parish

Old-fashioned escapism in the form of a classic crime caper. A high-octane Las Vegas jewel heist, a drug cartel closing in, hard-partying protagonists drinking away their pasts, all articulated in pacey staccato dialogue against a backdrop of pool parties, Mexican beach retreats and Mediterranean marinas. For those who like their beach reads hard-boiled and fast-paced.

‘The Mirror and the Light’ by Hilary Mantel

The final volume in Mantel’s Thomas Cromwell trilogy, reinventing Henry VIII’s enforcer, wife-wrangler and monastery asset-stripper as a sensitive and sympathetic man of the people, fighting for his survival in a shark-infested court. It’s a trick she pulls off beautifully, immersing the reader completely in Tudor society by sprinkling every description with meticulous poetic detail and drawing out the humanity in her characters: We are charmed by their sauciness, their weariness, disappointment, wit, malice, pride and grief. It’s a glittering treatise on the human nature of both princes and paupers.