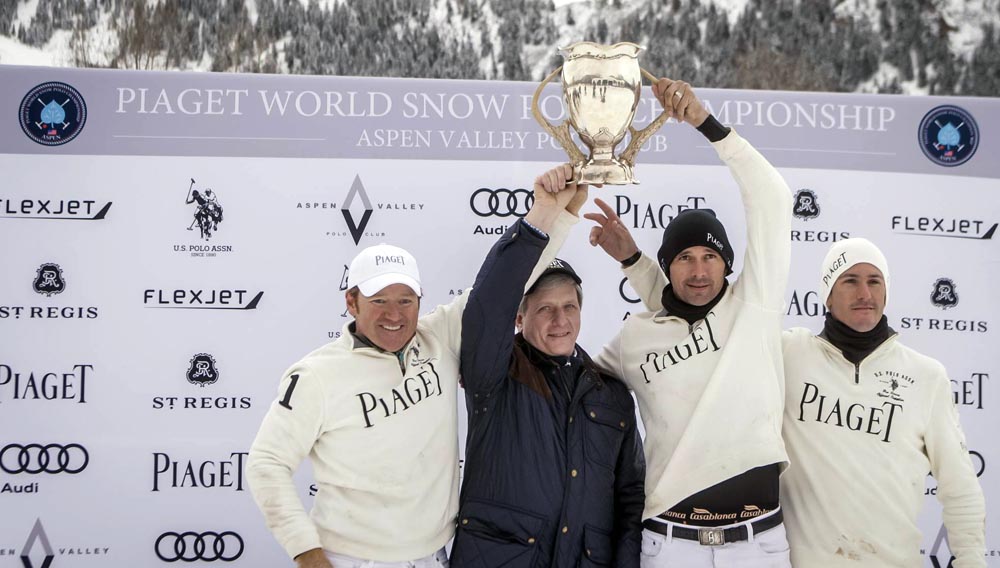 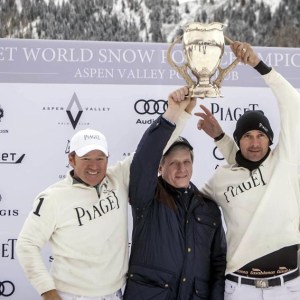 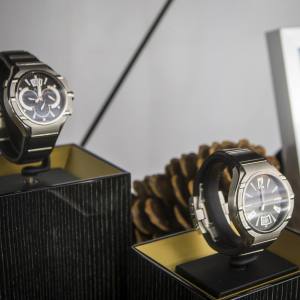 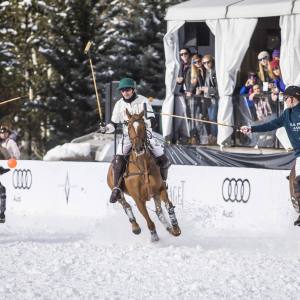 On Friday, with the picturesque Aspen Mountain as the backdrop, Aspen Valley Polo Club defeated St. Regis in a 4-2 victory, claiming 5th place.  The following afternoon, Team Audi trumped FlexJet 11-8, setting the stage for the final match between Piaget and USPA.

The first chukker saw Nic Roldan bolt into action, scoring two goals for Piaget. USPA’s Tommy Biddle retaliated quickly in the second chukker, tying the match 2-2 only to have Jeff Hall score in the third chukker putting Piaget back in the lead at 3-2.  It looked promising for Team Piaget, but with 1 minute and 30 seconds left in the final chukker, Grant Ganzi made his shot, tying the score at 3-3.  With Piaget and USPA locked in a stalemate, a tie-breaker seemed imminent. Then in the last 60 seconds, Jeff Hall took a penalty shot and scored, winning the match for Team Piaget.

Inside the VIP tent, Piaget hosted an intimate lounge for Aspen’s best and brightest to enjoy the polo action.  On display were the House’s newest Piaget Polo FortyFive timepieces along with photos showcasing Piaget’s long history with the sport of kings.  Following the match, Larry Boland presented the trophy, a silver cup accented with deer antlers, to the winning Piaget team. Nic Roldan was awarded MVP and Marc Ganzi’s horse, coincidently named “Piaget”, was recognized with as Best Polo Pony for the tournament.

“We are proud to return to Aspen, the only place in the US where snow polo is played, and are especially thrilled to have won the championship,” said Boland.   “Snow polo provides a rare to opportunity to strengthen our connection to the sport of polo, while bringing together the world’s best players in a breathtakingly beautiful location with exactly the right audience.”

Marc Ganzi echoed Boland’s thoughts stating, “We are thrilled to continue the tradition of snow polo in Aspen and to have Piaget as our official timekeeper.  Our hope is that this will become a tradition for many years to come.”

For the first time, the tournament will be televised by NBC Sports Network (NBCSN) on Dec. 27th at 4 p.m. EST.

Piaget has a long history with polo, dating back to the 1970s when Mr. Yves Piaget became a major advocate of the sport. He strongly believed that polo embodied the same attributes of the brand: beauty, daring and precision.  In addition to the Piaget World Snow Polo Championship, Piaget is the title Sponsor of the USPA Piaget Gold Cup and the Piaget Hamptons Cup.

‘The First Time’ With Bruce Springsteen