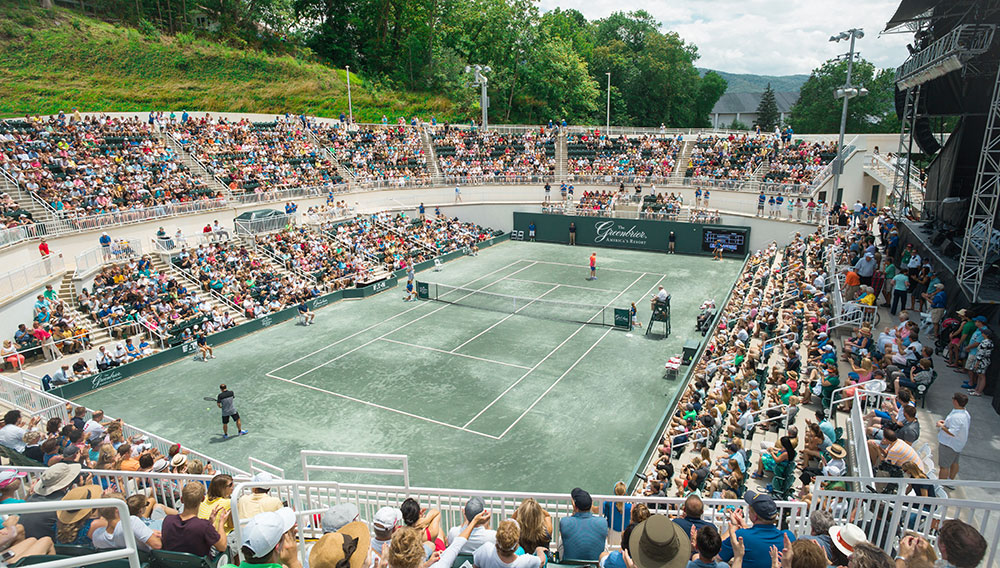 Four tennis titans and a few of their fans will rally together for a worthy cause at the fourth annual Greenbrier Champions Tennis Classic on September 26 and 27 in White Sulphur Springs, West Virginia. Held at the Greenbrier hotel (whose underground bunker was the planned emergency shelter for the U.S. Congress during the Cold War), the three-match tournament will host the sport’s elder statesmen Pete Sampras, John McEnroe, Jim Courier, and James Blake as they hold court at the resort’s newly constructed tennis facility—the 2,500-seat Center Court at Creekside stadium.

The action starts on Saturday morning with Courier holding a question-and-answer session for young players and their parents. At noon, McEnroe and Courier, two players who were formerly ranked No. 1 in the world at different times, will face off. During his career, McEnroe garnered seven Grand Slam singles titles and another nine for doubles, while Courier earned four Grand Slam titles and is currently the only man to win the French and Australian Open championships in the same year.

Later that afternoon, Sampras and Blake will battle it out. At the time of his retirement in 2012, Sampras had won 14 Grand Slam titles—more than anyone in history—and remains second only to Roger Federer, who has 17. Blake was formerly the No. 1 American player and No. 4 in the world at one point.

Fans will have a chance to mingle with these greats of the game at a Sunday-morning meet and greet before the doubles match featuring Sampras and McEnroe against Courier and Blake. Ticket packages for both days start at $100, while Saturday and Sunday tickets also can be purchased individually for $75 and $50, respectively. The opportunity to meet the players will cost an additional $100.

With a fund-raising goal of $100,000, proceeds from the Greenbrier Champions Tennis Classic will go to the Wounded Warrior Project, established to provide physical and emotional support to veterans injured during service. (greenbrier.com)