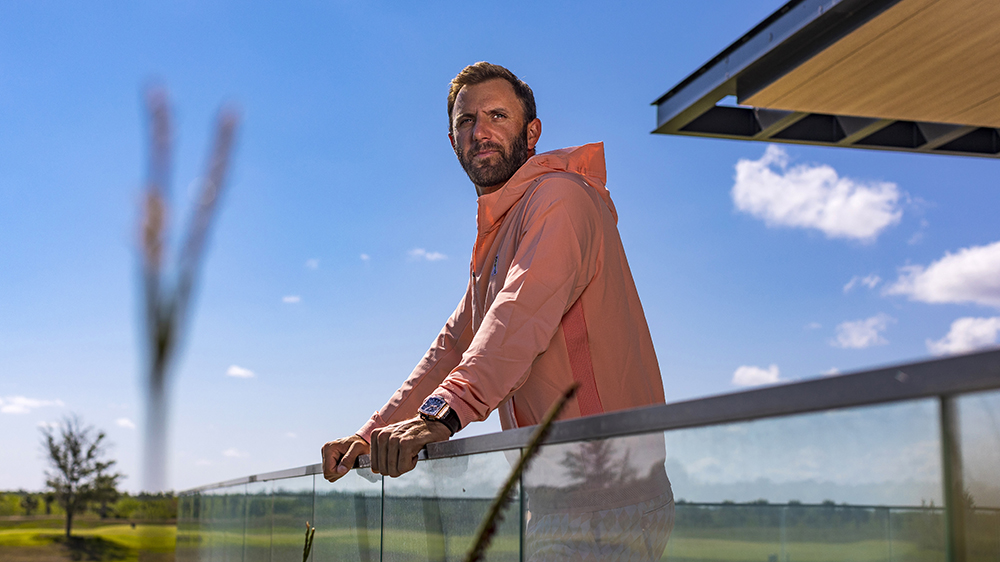 Dustin Johnson is the number one golfer in the world. In 2020, after his Travelers Championship win, he also became the fourth player in history to win a Tour title in each of his first 13 seasons. That’s a feat accomplished only by Johnson, Jack Nicklaus, Arnold Palmer and Tiger Woods. The 37-year-old South Carolina native, who now lives with his family in South Florida, is also one of the longest drivers on the circuit and has been annually ranked since 2008. To date, his swing has achieved 24 wins on the PGA Tour and two majors, putting more than $71 million in prize money into his pocket. It has also caught the attention of brands such as Adidas and Hublot, which both signed him as a long-term ambassador. After undergoing surgery to repair cartilage damage this year, Johnson had some extra free time during recovery to tee up his other passions. He’s even working on mastering a new game, far off the green.

I haven’t done it yet, but I’m going to fish in my first marlin-fishing tournament in the Bahamas.

I’m pretty happy with my life but, obviously, winning more golf tournaments and maybe having another kid.

My workout gear. I pretty much wear that all day every day.

Netflix. Unfortunately, I’ve had a lot of time on the couch in the last year. Yellowstone is one of my favorite shows. I also just started watching StartUp, which was pretty interesting.

Going out on my boat and spending time with my kids and Paulina [Gretzky]. I like to go fishing and diving. I have a 41 Bahama and 76 Viking Sportfish.

I just got a new green Hublot golf watch. It’s cool and really light. I don’t

I train every day, everything from Olympic lifts to a lot of golf-specific stuff. I’m still doing a lot of rehab work. I’m usually at the gym for an hour and a half a day. I ride the bike for half an hour and then I’ll train.

A yardage book holder from the 2020 Masters, which Johnson won.  Saul Martinez

I would like to be able to play the guitar. I’ve always been kind of drawn to it, but I’m horrendous.

I like jeans from J Brand, Hudson and Citizens of Humanity. Most of my suits, shirts and shoes are Prada. That’s where I get all of my dress-up clothes. I also like sneakers. I have a few hundred from Adidas. I’ve had a partnership with them for 14 years, so I have quite a collection.

Aisle. I usually sit in the first seat on the right on NetJets.

Which are your regular tables in London, New York or LA?

When we are in LA, we always go to Nobu in Malibu or La Scala in Beverly Hills. At home [in South Florida], we go to 1000 North. It’s open to the public, but upstairs they have a members-only section. It’s on the water and we go there often.

I’m wearing the Hublot Spirit of Big Bang. I own 15 Hublot watches. The Big Bang is my go-to. I also have a few more at the store I need to go pick up. I have a few other watches, but I’ve put them aside for my kids.

When I went to Baker’s Bay in the Bahamas.

The Bellagio in Vegas.

Whom do you admire most, and why?

Golf-wise, growing up I was always a big fan of Davis Love and Fred Couples. Michael Jordan is my favorite basketball player. And, obviously, Wayne [Gretzky] is one of my idols, and I feel fortunate that I now get to spend a ton of time with him. We play golf together and he’s pretty decent. He’s a 10 handicap. He could be a lot better if he wanted to be, but he just enjoys playing.

Extra chargers and cords; allergy medicine, a Z-Pack, B12 and vitamin C; my watches; a Theragun massager and a red-light machine that helps with inflammation. Four or five pairs of Maui Jim sunglasses. I always have a pair of sweatpants, a hoodie and a T-shirt because I’ve lost my luggage a few times. I still do it now even though I fly private.

I like a good Napa Cabernet or a Bordeaux. One of my favorite wine companies is Hundred Acre.

My Masters and US Open trophies. I keep them in my office, but they are in boxes because we are about to move.

Sherwood near LA. I like that neighborhood and the golf course there.

What was the last live performance you saw?

I have a foundation, which is the Dustin Johnson Foundation, and junior golf is a big focus. We support a lot of initiatives that try to get clubs in kids’ hands through outreach, through schools and sponsorships.