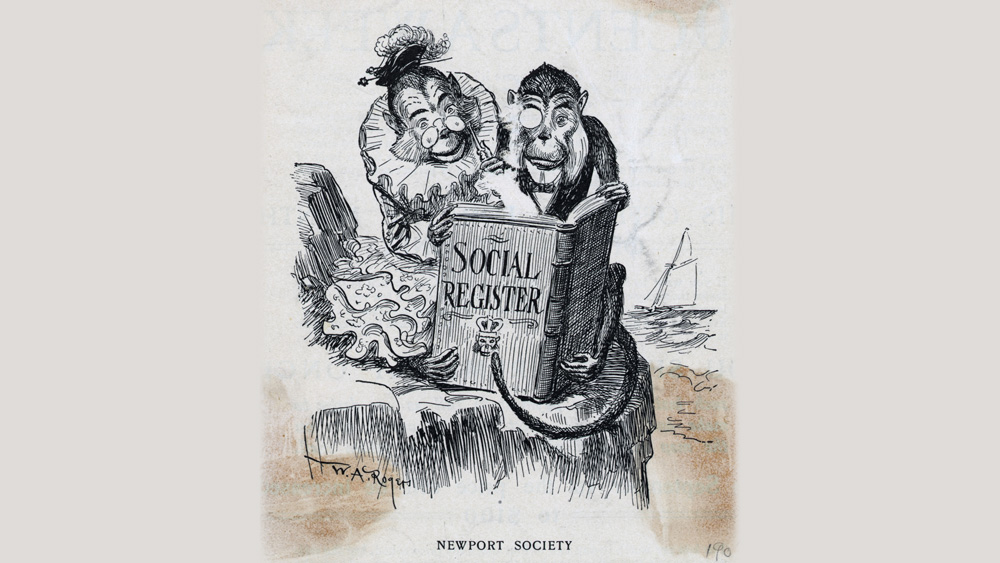 Around me, more than 175 members of one of this country’s most exclusive societies were gathered for cocktails last spring at the Woman’s Athletic Club of Chicago. There was a prosperous though understated look to the crowd—more Brooks Brothers than Armani—and the room buzzed with pent-up excitement. “This is the first time in our 130-year history that we’ve ever done something like this,” confided the evening’s host, financier Christopher Wolf.

The guests were no less aware of the momentous nature of the event. One partygoer, his tone hushed, observed, “This has always been like a secret society. I’m honored to be a member, but you don’t want to ask too many questions.”

The woman standing next to him agreed. “I still don’t know how I was selected for membership,” she said. “It’s like your name gets pulled out of a little black box somewhere, and you’re in. After that, it’s best to keep a low profile lest you do something that might cause waves.”

This is all too true, said an elderly gent with a Commander Schweppes beard. His was a distinguished family: His grandfather was ambassador to Switzerland, and his mother was “in the book.” Then she married a professional athlete, and the family was out. “Maybe tonight I’ll hear if our membership has been restored,” he said wistfully.

Whether his membership was restored or not, his sentiment was clear: Once you’re in, nobody wants to be dropped from the rolls of that most prestigious of American institutions, the Social Register Association. For generations, the association’s namesake weighty black book with the pumpkin-colored letters across its front has been emblematic of this country’s upper crust. It bespeaks old money, Ivy League, trust funds, privileges of birth, fox hunting, debutante balls, yachting, polo, distinguished forebears, family compounds in the Adirondacks, and a pedigree studded with 19th-century robber barons. In short, it has symbolized the American aristocracy.

There’s just one catch: While being listed in the Social Register  may bestow a leg up in life, traditionally it has been bad form to discuss it or tell anyone you belong to it. Indeed, as one doyenne of the debutante scene explained a few weeks after the Chicago affair, much of the organization’s mystique seems predicated on a kind of upper-class omertà. “Are we allowed to even talk about the register?” responded Lydia Butcher, the executive director of Philadelphia’s gauzy Charity Ball, when asked about her membership.

Butcher had this ethic drilled into her as a child. “My parents were exchanging addresses with another couple when I was about 11 years old,” she recalled. “I wanted to show how much I knew, so I blurted out, ‘You can look us up in the Social Register.’ ”

At that, she said, her mother chastised her sternly. “Don’t ever again tell anyone we’re in the register,” she scolded.

But what’s the fun of belonging to an elite society if nobody knows it or if there’s no way to recognize others of your elevated caste? The Social Register has no secret handshake and no club tie. You don’t want to pronounce your socially registered status on your résumé or business card, and people will look at you funny if you slip it into conversation: “Hold on a minute. Let me check my Social Register.”

We might wonder, in an era of unbridled connectivity—when every day brings a flood of would-be friends over the Internet and you can tap into entire libraries from your iPhone—who needs an institution one step removed from a Rolodex to affirm your station in life?

Yet as the association’s chairman explains, it is precisely the restrained human element that gives the Social Register its unique flavor. “We’re experiencing an upsurge in applications for membership,” said Wolf. “Individuals and families want to be part of a nice, dignified, low-key, and friendly association as opposed to the cynical ‘metadata-mining’ commercial operations.”

It doesn’t hurt that the Social Register comprises a disproportionate share of very wealthy members. “Our members represent well over $1 trillion in net worth, but there are also many, many talented families in the arts, design, entertainment, culture, education, and civics,” said Wolf. “Every edition of the Social Register carries the quote from Thomas Jefferson: ‘Let us in education dream of an aristocracy of achievement arising out of a democracy of opportunity.’ ”

It’s a noble sentiment, yet it hasn’t cost the register any of its exclusivity. According to Wolf, who acquired the association from the Forbes family in 2014, the register contains the same number of member families as it did in 1934—about 25,000—while the U.S. population has tripled since then to 325 million. “So we’re more exclusive than ever,” he noted.

More remarkably, while some see the Social Register as the symbol of an immutable, stodgy caste system, there are signs that the stereotype is giving way to something the old establishment never envisioned: The register is becoming social.

Under the stewardship of publisher Malcolm Forbes, who acquired the association in 1976 and consolidated the individual city books into a single publication, the Social Register seemed to keep members at arm’s length of each other. It’s not an exaggeration to say that under Wolf the association is bringing members—“the right sort,” he said—together.

“The Chicago event was the first time we’d ever hosted an event for members, and it was wildly successful,” said Wolf. “We didn’t know how our subscribers would respond. We expected 40 or 50 to turn out, and we got over 175.”

That was just the beginning. Similar mixers are scheduled in other major U.S. cities, and a Social Register clubhouse is planned for Manhattan. “It will be a convivial place for members to use while in town,” said Wolf, “to gather with friends, have drinks, hold meetings, and to research genealogy records.”

The Social Register’s roots can be traced to an arcane 19th-century custom called visiting lists. They held the alphabetically arranged names (and addresses) of prominent New York families—mostly of English and Dutch origin. In 1886, New York man-about-town Louis Keller consolidated the most important of these lists into one. His register was a smash, and by 1918 there were 18 annual volumes representing 26 cities.

Hollywood exploited the new class consciousness early on with story lines inspired by the association. There was the Our Gang silent movie of the 1920s called Social Register, and then came the 1931 play The Social Register, in which a high-society playboy becomes smitten with a working-class woman and hilarity ensues. A film version was released
3 years later. Popular culture didn’t always treat the Social Register crowd kindly. In one episode of Gilligan’s Island, the ditzy socialite Lovey Howell complains, “I don’t know how we’re going to explain to our friends that we spent several years with people who aren’t even in the Social Register.”

There is something to what Mrs. Howell said. While the rest of the country has become increasingly mobile, America’s blue bloods tend to gravitate toward the same orbits as their forebears did, attending the same schools, joining the same private clubs, and excelling in arcane sports such as royal tennis—a pastime favored by Henry VIII—and racquets, a rarer and more dangerous version of squash.

“If you want to move in certain circles, the Social Register gives you credibility,” said David Rawson, the founder of a private bank in Philadelphia. He divides his time between his sprawling estate outside Philadelphia and his tony flat in the 16th arrondissement in Paris. Rawson first became acquainted with the register while a freshman at Princeton. “My two roommates were in the book, and they used to talk about it all the time. They said the first thing a mother will do when her daughter has a new beau is look him up in the register to see if he’s for real.”

Conversely, as one veteran of the “stud line”—a name given to the corps of debutante escorts—observed, the Social Register is the Swiss Army knife of directories. “It’s a handy tool. Let’s say it’s 3 am, and you’ve been drinking, and you’re wondering what ever happened to some bygone girlfriend,” he said. “Well, you pick up the Social Register, and there’s everything you need to know—whether she’s been married and to whom and when, whether she has kids or not, where she went to college, her address, and, best of all, her phone number. You won’t find that kind of stuff on the web.”

Assuming your intentions are honorable, there are several ways of getting into the Social Register. The preferred way is to be born in, which leaves no doubt about your bona fides. The youngster may then remain a junior member until age 21. A second avenue to membership, popular among impoverished European nobles and assorted fortune hunters, is marriage, which automatically bestows membership on the lesser-pedigreed spouse and eventually their children. The third is to be sponsored, which requires the applicant to assemble as many as five letters from current members praising their friend’s philanthropy, unflagging taste, and discretion.

Though presumed by many to be the last bastion of snobbish WASP-dom, the register includes members who are not white, Anglo-Saxon, or Protestant. Still, the standards for inclusion remain rigid and arbitrary. The members of a 25-person advisory board—anonymous, of course—simply ask themselves one question when evaluating a candidate: Would I want to have dinner with this person on a regular basis?

You can only imagine the exquisite torture of waiting to hear whether you’re in or out. “We don’t send out letters of rejection,” said Wolf. “After a while, the candidates will simply realize they haven’t been admitted.”

If accepted, the applicant can claim kinship with Julia Child, Andrew Carnegie, Geoffrey Holder, George Plimpton, David Rockefeller, Hiram Bingham, Henry Kissinger, Oscar de la Renta, Richard Byrd, Chevy Chase, and every president since Ulysses S. Grant. Now that he is president, Donald Trump will be invited to join, even though his billionaire status had not earned him entry beforehand.

But it’s hard to say how membership will change your life. Your mailbox may fill up with invitations to posh affairs of all sorts. Your picture might appear in your local newspaper’s society pages. Your daughters could be invited to make their debut while your sons are welcomed into the stud line. But one thing is certain: You’ll have no lack of reading to do, because the association produces a number of publications aimed at enriching a subscriber’s life.

Under Wolf’s direction, the association reintroduced the Locator, which Forbes discontinued in 1976 when he consolidated all the city books into a single Social Register. The Locator offers the ease of locating members by country, state, and city, and then alphabetically within zip code. It can be especially helpful for travelers seeking the company of fellow members.

The main Social Register publication is the biennial winter edition, which comprises about a thousand parchment-like pages crammed with vital statistics: family names and addresses, memberships in clubs and societies, academic affiliations, and notices of births, marriages, and deaths.

Other Social Register publications regale readers with party pictures, profiles of prominent members, stories of interest to collectors and gourmets, and reports of weddings with pictures of brides and grooms and sometimes grooms and grooms. “Same-sex weddings are the kind of thing the old register never used to mention, but we do now,” said Wolf. “It’s just one of the ways we’re working to stay relevant to our members. If you don’t change, you fall behind.”