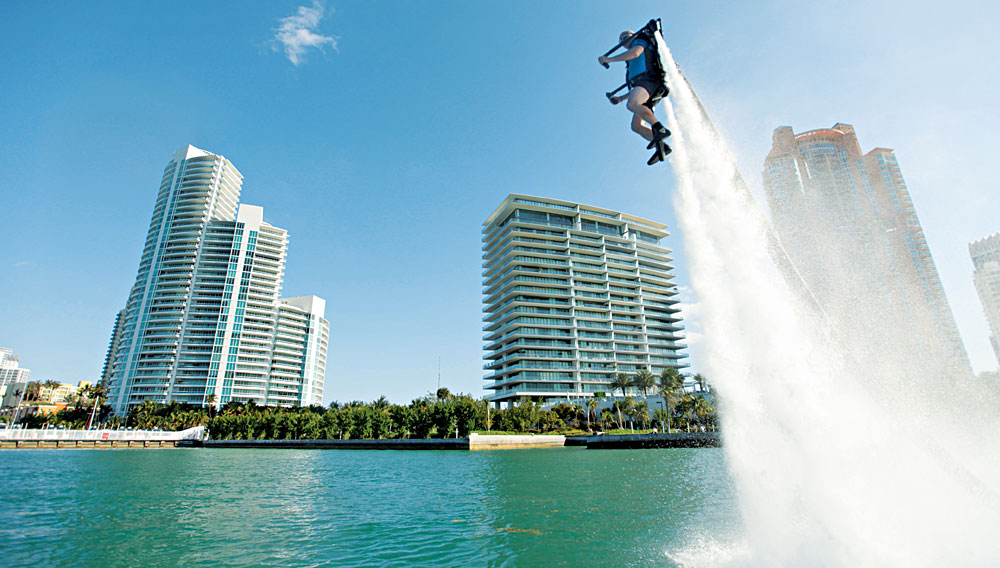 Aside from the occasional appearance as a spy-movie prop, the personal jetpack is a technology that never took off. But these long-anticipated recreational flyers have finally become a reality—if you just add water.

Jetlev Technologies of Dania Beach, Fla., released in April its Jetlev R200, a nearly $100,000 jetpack that employs a water-propulsion system similar to that of Jet Skis and other personal watercraft. A decade in the making, the R200 delivers 420 pounds of force—enough thrust for an average-size wearer to achieve airspeeds faster than 20 mph and heights of nearly 30 feet for as long as three hours.

The R200, which is designed for use in both freshwater and saltwater, utilizes a 200 hp four-stroke gas-powered marine engine housed in a small mobile boat. A 33-foot-long hose tethers the boat to the jetpack, delivering pressurized water that shoots from the pack’s two side-mounted water nozzles to propel the user skyward.

The jetpack’s wearers govern their direction by weight shifting and their speed with throttle-grip controls that adjust the angle of the water nozzles. A quick-release harness and a protective backrest and head support help ensure the user’s safety—as does the forgiving surface of the water below.