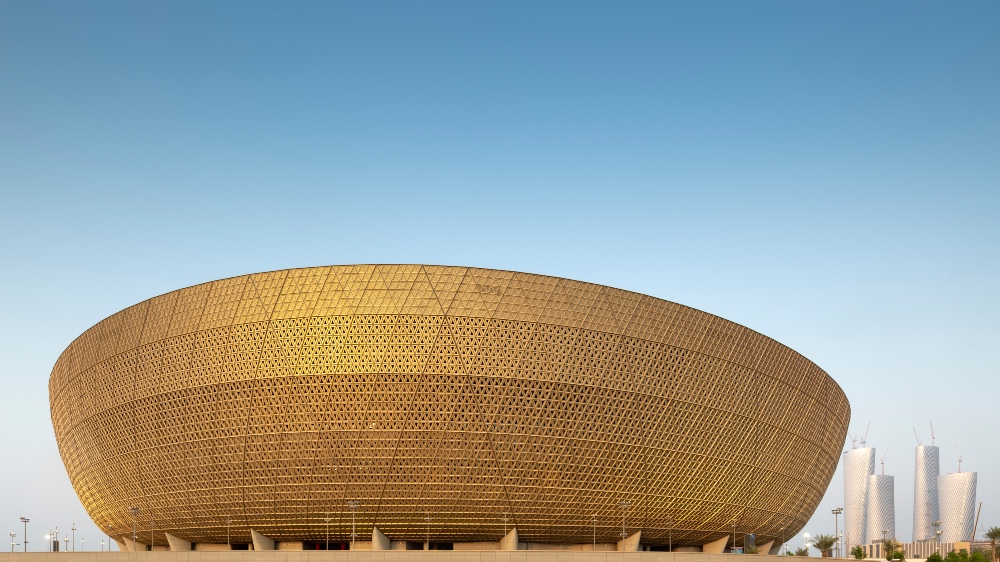 Soccer fans, it’s almost time! Football fever has descended upon Doha, Qatar, leading up to the world’s most prestigious sporting tournament. This week, UK-based design studio Foster + Partners unveiled the design for the Lusail Stadium which will be the setting for 10 matches during the soccer World Cup—including the final.

The stadium is unmissable, thanks to its burnished golden exterior: It lights up beautifully at night and even sparkles under the sun. Inside the showpiece, a muted sand-colored palette will allow fans to provide the color splash with flags, kits and scarves. The eye-catching design was inspired by Islamic bowls and fanar lanterns in addition to the region’s local architecture.

The venue comes with air conditioning—Qatar is one of the hottest countries in the world, with temperatures reaching 41º C—which should make matches or concerts more bearable for the 80,000 fans that can fit in. Foster + Partners’ past projects include the Panama Tocumen International Airport and various Apple stores including those at Marina Bay Sands in Singapore and Los Angeles’s The Grove.

“Spectators enter the vessel between two tiers of seating that have been intentionally compressed to heighten the sense of drama as they emerge into the generous seating bowl flooded with natural light,” explains Luke Fox, Head of Studio, Foster + Partners in a press statement.

Earlier this month the venue also hosted the Lusail Super Cup final between Saudi Pro League champion Al Hilal SFC and the Egyptian Premier League’s Zamalek — serving as a precursor to what we might see once the World Cup games kick off.

“Together with our joint venture partner, Arup and sports specialist Populous, we believe the stadium will be a truly memorable venue for this year’s final and many other international events in the future,” ” says Angus Campbell, Senior Partner of Foster + Partners, in the statement.

The World Cup kicks off with Qatar vs. Ecuador on Sunday, November 20. The final, at the Lusail Stadium, is on Sunday, December 18. Game on.

Click here to see the Lusail Stadium in photos.