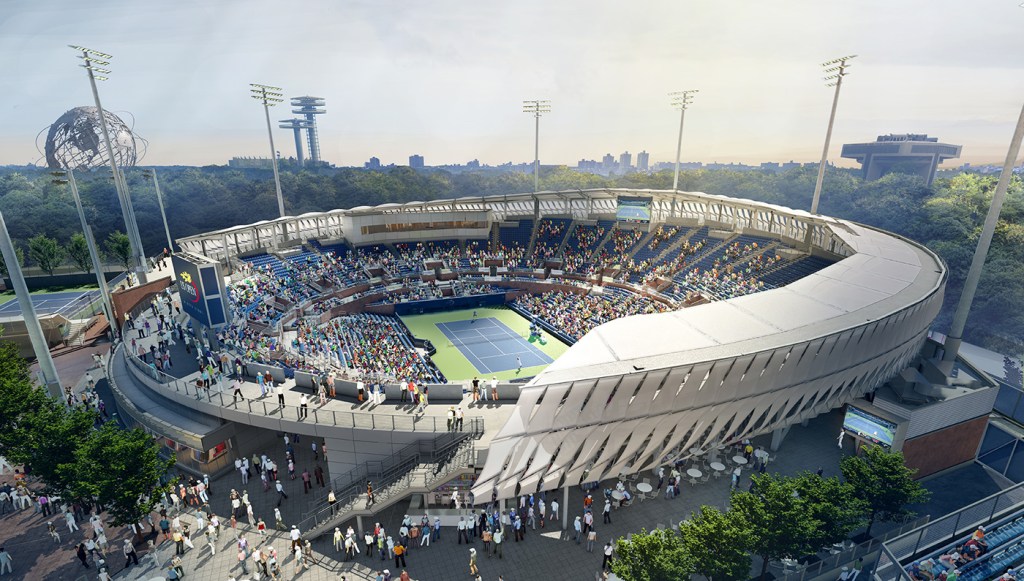 Soon to serve up a sensational new stage for the US Open, the United States Tennis Association (USTA) and the architectural team at Rossetti have collaborated on a $550 million enhancement to the National Tennis Center in New York City. As part of the USTA’s “Sports Spectacle Vision Plan,” the Detroit-based design firm has run point on numerous projects throughout the 46-acre complex in Flushing Meadows, including three new arenas. And renovations to the existing Arthur Ashe Stadium are through the roof—literally.

Taking center court in the most recent upgrades, the 125,000-square-foot Grandstand Stadium will open in August and seat 8,125 attendees (almost 2,000 more than the existing version) while providing an airy aesthetic. With the look of well-aligned leaves, the exterior comprises 486 panels fashioned from Teflon-coated fiberglass membrane that extend over 26,000 square feet. Fan traffic will flow easily throughout the structure thanks to several staircases along the flanks, as well as an extensive upper walkway along the circumference that offers a premier perspective.

A real game changer, the largest retractable roof of any tennis facility to be found has been installed over the 23,771-seat Arthur Ashe Stadium (originally designed by Rosetti), making the chance of rain irrelevant. Adding to the increased level of comfort are 84 private suites (spanning two levels) and two exclusive restaurants (each accommodating 300 patrons).

Also in full swing is development of the new South Tournament Courts (and South Plaza), the Mercedes-Benz Pavilion, a redesign to the 14,000-seat Louis Armstrong Stadium, and relocation of the famed “Court of Champions.” A grand pedestrian thoroughfare will help visitors volley between venues.

Despite Rossetti’s concurrent projects (including businessman Dan Gilbert’s proposed $1 billion MLS Stadium and Sports District in Detroit), it expects the US Open’s home to be completely refurbished by 2018, culminating 10 years of construction. The two-week tournament begins on August 29 and will draw over 750,000 people by the last game, set, and match. (rossetti.com)