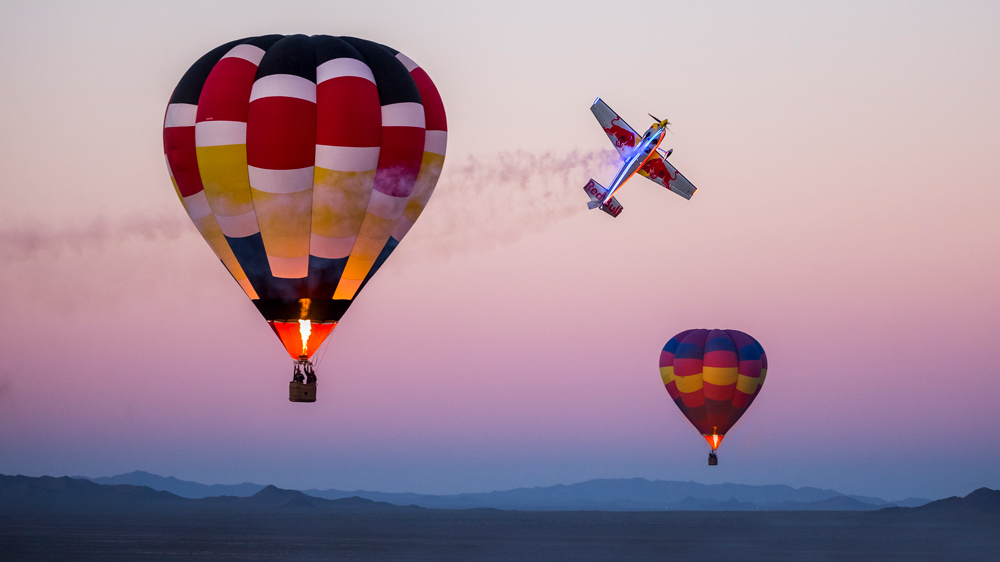 You could call Kirby Chambliss a daredevil. But he would say he just takes “calculated risks.”

As a world champion aerobat, he weaves ultra-lightweight single-engine planes through a harrowing series of “air gates”—marked by pairs of 80-foot-tall inflated pylons—with utter precision, all the while managing gusts of wind, occasional engine failures, and chest-crushing g forces. But this is Chambliss’s dream.

“For me, I always knew that I was going to be a pilot,” says the Texan. “There are pictures of me when I was two years old, dragging toy airplanes around.” He started flying at age 13 alongside his father in a tiny two-seater. After becoming a commercial pilot for Southwest Airlines at 24, Chambliss was introduced to aerobatics quite by chance—he first tested out his rolling and spiraling skills as part of a safety course meant to teach corporate pilots how to straighten a plane that had turned on its side. “I went out in an aerobatic airplane with an instructor, and we turned it upside down, and I was like, ‘This is the coolest thing ever.’” From then on, Chambliss had a new adrenaline-pumping habit to feed. “At that point, I couldn’t have cared less about flying straight and level. Aerobatic flying was all I thought about and cared about. Everything went towards that.”

Today, Chambliss estimates he’s been in the air for 27,000 hours. He has also won two World Titles and is a five-time U.S. National Aerobatic Champion. This October, he’ll shoot for the No. 1 spot at the 76th annual Red Bull Air Race Championship at the Indianapolis Motor Raceway.

Chambliss is also known for some incredible stunts. He’s landed small planes on the Las Vegas Strip, and earlier this summer he twisted in between hot air balloons over the deserts of Arizona—and some of these feats could even be considered “practice” for competitions.

We spoke with the calculated risk-taker about his ideal race conditions (nope, it’s not sunny days), what he does to stay fit, and what those colossal g forces really feel like.

Are there little things that you like to do to help you focus right before the race?

Visualization is so important. I really try to visualize. The other thing I’ll do is I’ll set up a bunch of Red Bull cans in the hangar so that they look like where the gates would be, and I walk through those and think, “I’ll get the winds from this direction. Then, I’ll need to hug this side because even though the airplane’s heading this way, it’s actually going to be moving to the left or to the right.” All those things are really important. Again, you’re going 230 mph; you’re pulling 11.9 gs at some gates. Things happen really fast.

Are you ever afraid in the air?

No. There’s no time for that. I’m thinking about what’s the best way to get this airplane on the ground and not get hurt and not die. I’m trying to teach my daughter “Don’t panic.” You can’t panic because when you panic, you stop thinking. As a pilot, you’re taught not to panic. So far, it’s always worked out for me.

What are ideal weather conditions for a race day?

A lot of guys maybe would say, “It’s perfect when there’s no wind and it’s not rainy and the visibility’s good.” But for me, I have enough experience that I tend to do better when things are horrible. Let the wind blow like crazy—if it rains or whatever, bring it on! A lot of times, I’ll fly better in bad weather. When everybody was complaining, I would end up winning.

What kind of advice would you give someone who wants to do air racing or aerobatics?

You can make it happen, but you’ve got to be willing to sacrifice. Be happy that you were born an American, that you can still do what you want to do, be willing to make those sacrifices. I’m not saying it’s going to be easy. That’s the advice that I would give someone going into not only aviation but anything. I made my path and just by being super persistent. I knew where I wanted to go, and I wasn’t going to let anybody tell me I couldn’t get there.

How fit do you have to be to do this?

I think that you have to be in overall good health to be able to do this. I mean, in the races we do go up to and sometimes over 11.9 gs. We’ll do a sustained g for five or six seconds for at least 9 gs or right at 10 gs. People ask, “What’s that like?” It’s like a house sitting on your chest. It’s hard to breath. You’ve got to be in good physical shape. I continue to work out. I’ve run my whole life and bike and lift weights.

How do you feel about the risks?

Is there an element of risk to it? Of course. I mean, over the years, I can tell you for sure that I’ve lost over 100 friends. But it’s just like anybody that races cars or anything else.

Besides flying, any other favorite activities?

I have a 13-year-old daughter, and we have a Scorch, which is like a dirt bike with wings. You can take it off and land it in 50 feet. We land all over the desert, kick rocks around, chase the wild horses and coyotes, and have a blast.