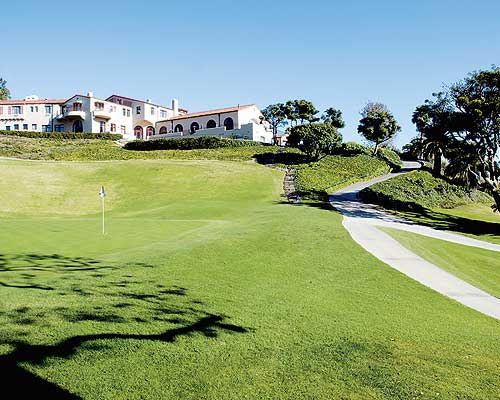 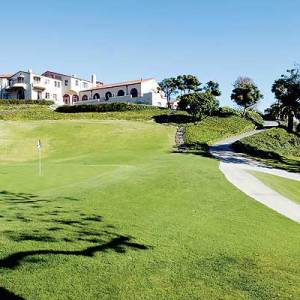 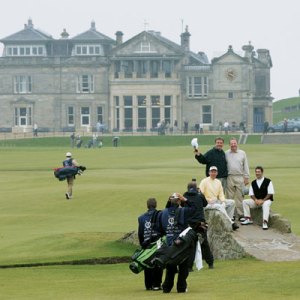 The assistant golf pro stands at the fringe of the first tee at the Riviera Country Club in Pacific Palisades, Calif. “Now playing,” he announces, “Mr. Jerry Clark from San Diego.”

Clark, a retired dentist, prepares to hit his tee shot from the sliver of grass on the edge of a steep hill, a launching pad placed so close to the clubhouse that it seems you could scrape the pink stucco wall with your 3-wood. Suddenly, a cart occupied by actor Jack Nicholson comes barreling down the macadam path behind the tee. Because you could reach a passing cart with your back swing, and perhaps because the mercurial Nicholson has been known to swing back when provoked, Clark pauses while the cart rolls by. Meanwhile, a gentleman watching the scene unfold a few steps away mutters to a fellow member, “What the hell is this?”

Jack Nicholson is a member at the Riviera Country Club. Jerry Clark and the other golfers in his foursome are not. And while he may be bemused by their formal first-tee introductions (generally reserved for professionals competing in the Riviera’s annual Nissan Open), the muttering member seems more perplexed by the mere presence of these strangers at his club. He may have to become accustomed to such intrusions.

Pioneered by the private flight industry, and since mimicked by organizations in the vacation home market, the concepts of fractional ownership and shared-access programs appear to be headed to the country club. A growing number of companies are offering privileges at several private and semiprivate golf clubs through a single membership. The objective is to lure the same types of affluent individuals who prefer to have access to multiple residences rather than to own one vacation home outright, or who opt to purchase flight hours on a private jet rather than to stash their own plane away in a hangar.

The scene at the Riviera was part of an event sponsored by the Eden Club, an international organization that affords its several hundred members access not only to its home club at St. Andrews in Scotland, but also to a number of golf resorts and private clubs around the world. For a $49,000 initiation fee and annual dues of about $4,500, Eden Club members receive unlimited golf privileges at the St. Andrews links courses (Old, New, Jubilee, Eden, and Strathtyrum), seven complimentary rounds of golf at other resorts and private clubs, and seven nights’ accommodations at the club’s lodge in St. Andrews or at one of several golf resorts. According to company chairman Tom Lawrence, the Eden Club has working relationships with more than 85 resorts and can arrange tee times at otherwise private golf clubs such as Merion in Ardmore, Pa.; Shinnecock Hills in Southampton, N.Y.; the Wentworth Club outside of London; and, of course, the Riviera Country Club.

The Riviera event was a two-day tournament for Eden Club members and their guests, one of a handful of gatherings that the company organizes for its membership. Participants stayed in the Riviera’s guest-room wing, where suites bear the names of former members such as Dean Martin and Walt Disney. The action included two rounds of Ryder Cup–style team match play and an awards banquet on a balcony overlooking the club’s 18th hole. “These events are quite popular with the members,” says Lawrence. “We publish the schedule every fall, and the available spots are quickly snapped up.”

Lawrence, a former professional soccer player in his native England who also played a few seasons for the New York Cosmos, launched the Eden Club in 1999. He enlisted a board of advisers that includes Riviera president Michael Yamaki and Jamie Reynolds, co-owner of Reynolds Plantation in Georgia, and he raised the capital to purchase the Eden Club’s home base in St. Andrews. At the organization’s main clubhouse, a renovated historic landmark that sits in front of the Old Course Hotel along the 17th hole, members enjoy amenities—locker rooms, caddy programs, club-cleaning services—typical of a more traditional country club. Land Rovers shuttle members from the clubhouse to all of the St. Andrews courses and to the Strathtyrum House, the Eden Club’s private, seven-room lodge set in an early-18th-century home. Stays at the home—located, as it is, at the home of golf in St. Andrews—are popular with the club’s members. “We try to deliver an experience you can’t find anywhere else,” says Lawrence.

One critical part of that experience, claims Lawrence, is the Eden Club’s in-house “secretariat,” who makes travel arrangements (private or public), books rental clubs and cars, and, most important, secures tee times at public and private courses virtually anywhere in the world for members. While the Eden Club has purchased some private club memberships to ensure access, in most cases the company relies on a networking system to fulfill members’ desires to play certain courses. So far, says Lawrence, the system has worked well, although tee times at some exclusive courses, notably Augusta National in Georgia, remain unattainable through the club.

Like the Eden Club, a handful of other companies are exploring the viability of offering access to multiple private golf clubs, albeit with varying approaches. Denver-based Exclusive Resorts, one of the first to apply such principles to the vacation home market, has invested heavily in real estate at golf communities and has obtained several private club memberships in the process. While staying at one of the golf communities, participants in Exclusive Resorts’ residence club program (the company does not offer a golf-only program) have membership privileges at the applicable club for as many as 60 days a year.

Exclusive Resorts has purchased memberships at private courses including the Snowmass Club in Aspen, Colo., and the Carnegie Abbey Club near Newport, R.I., where the company has acquired four home lots and the accompanying club memberships. While some local members of Carnegie Abbey—which is owned by Peter de Savary, developer of England’s Bovey Castle and the new Abaco Club in the Bahamas—expressed reservations about allowing transient members, they, much like their counterparts in California, may have to acclimatize to the presence of outsiders. Indeed, the Carnegie Abbey Club maintains a handful of accommodations for out-of-town members or their guests in the upper reaches of its cedar-shake clubhouse overlooking Narragansett Bay.

Abercrombie & Kent, another leader in the residence club market, offers a similar system for its golfing members. A&K owns properties in golf-centric locations including the Aspen and Vail valleys in Colorado; Kiawah Island, S.C.; Scottsdale, Ariz.; Rancho Santa Fe, Calif.; and Las Vegas; and members enjoy access to private clubs such as Tiburon outside of Naples, Fla., and the Tom Weiskopf Private Course at PGA West in La Quinta, Calif. A&K members can stay at the properties—and, in many cases, play on the accompanying private courses—without limits on the number of days of use per year.

Golf-specific fractional programs remain limited in number and, in some cases, scope. In the metropolitan New York area, the new Tour GCX Partners organization is marketing a program that, at a cost of $6,250, promises 10 rounds of golf per year for the member and three guests at a select group of private clubs in New York, New Jersey, and Connecticut. (Tour GCX does not release publicly the names of the courses that members can play.)

Much grander in scale is the program offered by Dallas-based Club Corporation of America. ClubCorp owns and operates nearly 200 private country and golf clubs, as well as urban dining and sports clubs, in the United States. In 2001, the company launched its Associated Clubs International program as a way for members to enjoy privileges at all ClubCorp properties, as well as other participating clubs and resorts. To join the ACI program, one must already be a member at a ClubCorp country club. However, for only $25 to $50 per month (in addition to the home club’s dues), an ACI member can obtain complimentary tee times and other benefits at ClubCorp facilities such as Firestone Country Club in Akron, Ohio; Pinehurst in North Carolina; Kemper Lakes outside of Chicago; and Forsgate Country Club in Monroe, N.J.

“The focus is to help our members who are traveling on business or pleasure,” says Larry Hickman, director of the ACI program. “It’s not meant to bypass the membership process; it’s utilized as another perk of being a ClubCorp member.”

Participants in ClubCorp’s ACI program are limited to two visits to any given facility (with the exception of their own) within a 30-day period. “We see this program as a way to capture our members’ dollars at our own properties,” adds Hickman, “a way to keep it in the family, if you will.”

Hickman’s “family”-oriented approach points out one potential benefit to the ACI program. Members at all ClubCorp country clubs are free to join the program and play the other private courses in the network; therefore, when at home, the golfers may be more accommodating to outsiders than the unsuspecting members at the Riviera or Carnegie Abbey seem to be.

Regardless, whether through ClubCorp, the Eden Club, or another of the organizations in this nascent market, fractional ownership appears to have found a home in the world of private golf.

Click Several Ways To Slice It for additional information on the clubs mentioned in this article.