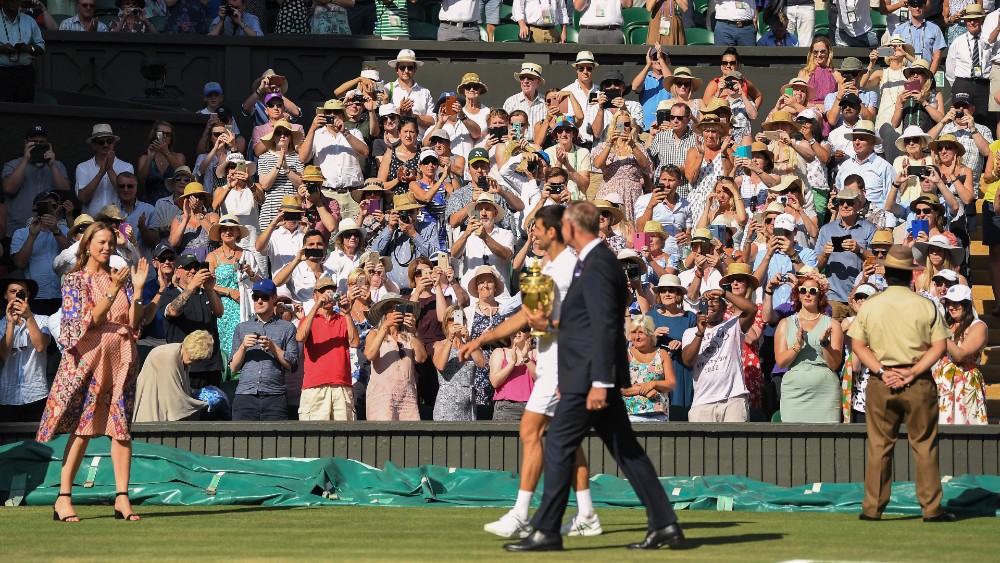 Serious tennis lovers need to set their alarm on Thursday morning—but not for that early morning lesson. An exclusive, five-year block of VIP tickets to Wimbledon’s Centre Court will become available for purchase at 10 a.m. Known as the debentures, the tickets, which will run for the 2021-2025 seasons, are expected to go for £100,000, or about $132,000.

“They are the most sought-after tickets in the world,” Claire-Estelle Bertrand, the marketing manager for Wimbledon Debenture Holders resale service told the Guardian. “Not only do they give you the best seats to see the world’s best tennis, but they grant you access into a rarefied world to meet other global influencers.” Indeed, the tickets not only get you prime placement at one of tennis’s most celebrated competitions, you’ll watch the matches set among a who’s who of celebrities, execs, and even royalty.

The debentures were first sold in 1920 to help fund the construction of Centre Court. To be sure, the seats are no slouches, occupying both sides of the royal box on level two for prime views of the action.  Holders are also granted access to the stadium through an exclusive entrance and are then led to a private champion’s room, which offers unobstructed views of the courts. For lunch, debenture holders get exclusive access to the Courtside restaurant, with meals prepared by celebrity chefs Albert Roux and Bryn Williams.

Despite the exclusive treatment, you won’t be inconspicuous in these seats. That’s because Debenture holders are easily identified by a purple neck lanyard, which may not be fresh from the runways but will certainly be one of the buzziest accessories in London come July.

And if you love tennis but don’t know where you’ll be in five years, there’s good news: The debentures aren’t just prime seats—they can also be lucrative investments. Holders can resell seats for any given match or for a full tournament, and it’s not uncommon for the seats’ value to triple, especially on championship days.

This year, there will 2,520 debenture tickets available for purchase, and industry experts are predicting that demand will far outpace supply. The sales are expected to net the All Tennis Lawn and Croquet Club a whopping £250 million ($330.5 million)—which will help fund the purchase of a neighboring golf club and upgrades to Centre Court’s corporate facilities.

For those who love tennis (and happen to have an extra six figures lying about), this is an undisputed grand slam, so make sure to check out Wimbledon.com.