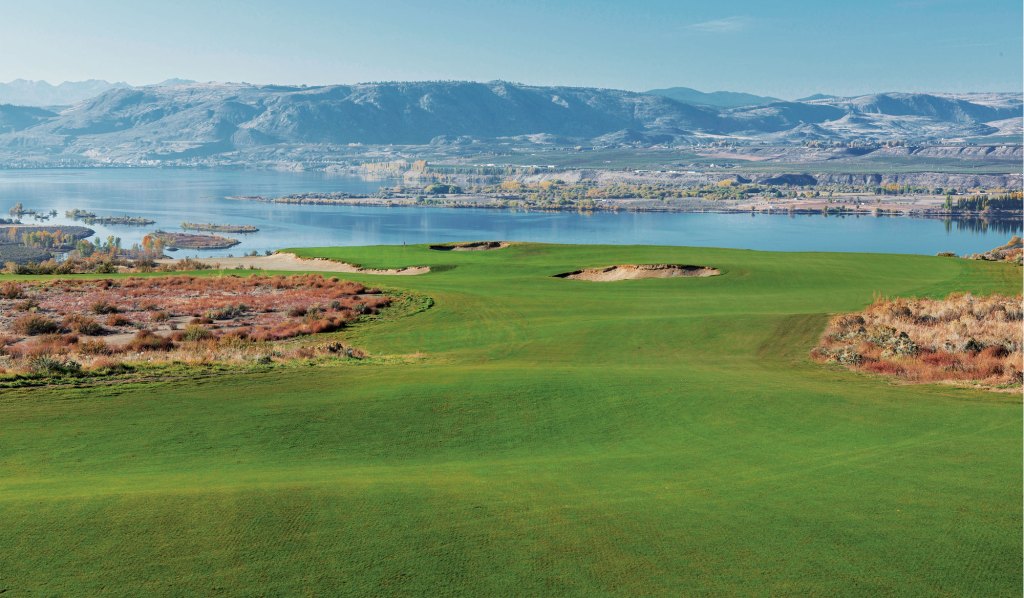 David McLay Kidd has earned a reputation for building first-rate golf courses in out-of-the-way places. The architect’s designs—which include the original layout at Oregon’s Bandon Dunes, the ingenious Huntsman Springs in Idaho, Guacalito de la Isla in Nicaragua, and Machrihanish Dunes on the Kintyre peninsula of his native Scotland—may be a little difficult to reach, but each is well worth the trip to get there. Set among the apple orchards of central Washington State, about a three-and-a-half-hour drive east of Seattle, Kidd’s latest creation further attests that out-of-the-way can be outstanding.

Opened in August, the Gamble Sands golf course spreads majestically across vast sand dunes that look down on the Columbia River and up at the Cascade Range. The layout swoops and swings over the mildly rolling (and walkable) terrain, where, with everything in plain view, there is never a question of what shot to play. The only trouble is sand—of which there is an abundance—but it is easily avoided by any golfer. Because more than anything else, Gamble Sands shows that it is possible to build a golf course that accommodates every type of player, enchanting the beginner as well as the best, the bunter as well as the big hitter.

Big is the operative word at Gamble Sands, where Kidd and his associate Casey Krahenbuhl flouted conventional wisdom and built enormous fairways—some 100 yards wide—that are almost impossible to miss. Greens are also generously sized, and five sets of tees offer a range of options. “No matter what your level of ability, we want you to feel confident and make a confident swing,” Kidd says. “There’s an aggressive, attacking line for the good golfer, but for everyone else there’s width and gracious support, not frustration and hindrance.”

Appropriately enough, this everyman’s course is open to all golfers—at least those willing to make the trek to central Washington. The journey will be far more inviting once Gamble Sands’ 10 elegant guest cabins—set near the first tee and modest clubhouse but invisible from the course—are completed in 2016. In the meantime, those who fall in love with Gamble Sands can investigate the private-membership options. The club’s Premier program, which is priced at $100,000 with no future dues, offers unlimited golf for the member and his or her family, and promises total repayment with interest at the close of the term.

Gamble Sands has plans to build a second golf course, though no timeline has been announced. For now, Kidd’s course—and its promise of an enjoyable experience for all—should be sufficient to lure golfers to this out-of-the-way destination. “We want you to have fun,” Kidd says, “and play your best golf here.”